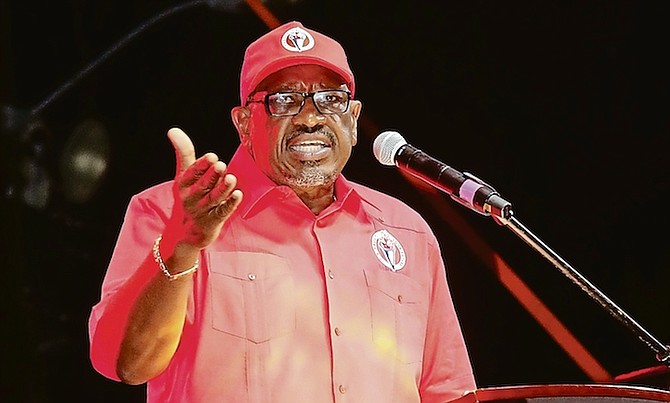 Dr Hubert Minnis speaking on the night before the election.

In a concession speech released by the FNM, outgoing Prime Minister Dr Hubert Minnis has thanked Bahamians for the last four years:

“Tonight I spoke with Leader of the Progressive Liberal Party Philip Davis and offered my congratulations to him and his party on their victory at the polls,” Dr Minnis said.

“I offered him my best wishes as his Government now faces the continued fight against COVID-19, and the restoration of our economy.

“I would like to thank the tens of thousands of Bahamians from across The Bahamas who voted for Free National Movement candidates. I also congratulate the FNM candidates who won seats in the House of Assembly.

“I am in that number, and again my gratitude goes out to the people of Killarney for making me their representative for the fourth consecutive time.

“I will lead the Free National Movement into the House as the leader of Her Majesty’s Loyal Opposition. The Bahamas has a proud democratic tradition. The people decide who serves as government.

“The people determined that they preferred the Progressive Liberal Party. My party and I accept that result. We are proud of our record the past four-plus years.

“During our term we faced the most difficult times in Bahamian history. In September 2019, Abaco, the Abaco Cays and Grand Bahama were struck by the strongest storm to hit The Bahamas.

“Hurricane Dorian was one of the strongest storms recorded on our planet. It caused generational destruction to our northern islands. Six months later, we were in the COVID-19 pandemic.

“Throughout each crisis my Government worked hard to assist the Bahamian people. On the northern islands we have had to rebuild roads, water systems, schools, docks, bridges and other critical infrastructure.

“In the pandemic, we provided tens of millions of dollars per month in food and unemployment benefits to citizens, along with tax credits to businesses. We fought hard to secure more than half a million doses of three of the best vaccines in the world.

“The FNM has a proud legacy. We have governed The Bahamas over four terms. Our philosophy is to use the resources of government to provide opportunity to those who have historically been without.

“That is why we created the Over-the-Hill initiative to benefit people in grassroots communities with tax concessions and development assistance. That is why we invested record amounts in Family Island infrastructure.

“That is why we created the Small Business Development Centre, extending millions of dollars to help Bahamians realize their dreams.

“Our belief in the Bahamian people was also evidenced in the manifesto we ran on in this election. We pledged a Universal School Meals Program, expanded access to afterschool programs, $250 million to Bahamian small businesses over five years, expanded access to Crown Land, support for the arts and agriculture and fisheries, along with many more policies for the people.

“We did not win this time. But I say to the next generation of FNMs that you should stay firm to this party’s founding ideals. Always put the people first, and be honest in government.

“I thank my wife Patricia and my family for supporting me during this term, and throughout my life. I also thank the officers, members and supporters of the Free National Movement for their assistance and encouragement during my time as leader.

“And to the Bahamian people, I say a warm and heartfelt thank you for my time being your Prime Minister. You are a strong, hardworking and resilient people. Hurricane Dorian did not break you. The pandemic has not broken you.

“You trust in the God who has brought us this far. Trust that He will bring us further to brighter times. Again, thank you. And may God bless the Commonwealth of The Bahamas.”

And the missteps continue. The defiant 7 already told you what Minnis was like as leader of opposition. This will be disastrous. The council needs a convention before year end

But why haven't they shown Killarney's results anyway???

They got tired of counting and went home. No more results tonight.

Hurricane Dorian did not break us nor the pandemic. But Minnis break the spirit of this nation. Well put him in the yard to catch some mice.

you are correct, it was all self inflicted.

It was so careless for Minnis to call elections during a Covid surge and surge in deaths. Now it's all in vain. They still lost. How many people caught Covid today?

... all I have to say to Minnis is KYA! His arrogance knew no bounds. See ya!

Minnis, you killed your own chances. Your decisions and your attitude led to your demise. You locked us down killing the economy, jobs, and people's spirit. You talked down to and persecuted those of us who weren't vaccinated, and you mishandled the pandemic. Take your leave sir, while we look to the new leadership to guide this country.

Minnis and most if not all of the FNM party needed to be shown the error of their ways. But, "while we look to the new leadership to guide this country", this statement right here is a joke. The word leadership is used so loosely, there is no such word regarding Bahamian politics, the past 20 plus years. Changing a filthy underwear with a filthy underwear will never solve our issues. But, we never align ourselves with candidates possessing a shred of integrity...just ones that want to shake, and break the proverbial cookie jar.

ANYONE who said they saw this coming is not a friend to the truth. Bahamians felt something needed to be fixed but they were not ready to return the country back to the PLP. But Minnis continued to make missteps and ignored the writing on the wall. Dragging people out their homes to campaign and then to vote whilst friends and family members were dying was totally disrespectful and the height of hypocrisy as the competent authority. Especially after Minnis had the country locked down under less severe conditions. Minnis came in prosecuting former MPs for corruption and dishonesty. But he endorsed his candidate for Long Island who appeared steeped in nepotism and corruption. The people of Long Island embraced him but the rest of the country rejected him. Minnis apparently abandoned protocols for the corona pandemic exclusively for vaccines. And Bahamians paid a big price with more persons becoming ill and more Bahamians dying. Minnis decided to play musical chairs by calling a snap election and taunting Bahamians as to when It Wil be. Bahamians wasn’t into that game and they made sure Minnis got that message. Minnis built his campaign around attacking Minnis rather than showcasing his government’s performance and future plans. Many Bahamians were offended by some of the dirty and nasty ads the FNM ran. Six Bahamians got executed in broad daylight in the capital. Marvin Dames and Paul Rolle again tried to play with the psyche of Bahamians saying they had suspects and the public would soon know who did it,today they still don’t know. Neither do they know who killed the marine at government house, But they still don’t know, Neither do they know bwhere is the missing man from Minnis own constituency. They don’t know beguiling there was a need to raid Bahamians in the middle of the night with Blackhawk helicopters or bring out heavy artillery for Bahamians during a very peaceful, labor related protest. Where is the money from the travel visas? Did it row away in some Kanoo? Whilst the average Bahamian struggled to put food on their table. Then there were the coconut boys who got locked up and received hefty fines . There was the person charged for going to the pump for water and the weeks and months when Bahamians were prohibited from going to the beach. Then there were incidents when Bahamians were cited and fined for being on the beach just minutes after the beach closed. Bahamians were highly offended by how some of the food distribution programs were executed or t with the expenses they had to incur to travel inter-island. Minnis failed to win tge trust of the Bahamian people again. Many believe their future now begins with a (brand) new day!

ZZZZZZZZzzzzzzzz........and that's without reading whatever it is you wrote. LOL

hold on though, I need my 2% back. I went into the store this morning, and they charged me 12% VAT.

Minnis made desperate last minute unaffordable promises in the hope of re election and had the FNM been re elected none if any would have come to pass. However anybody who thinks Brave Davies has a magic wand to solve the financial, hurricane and covid crisis is also living on another planet. Stupidity is not relegated to FNM or PLP and the same stupid people who defied common sense rules re vaccination, social distancing and wearing masks will continue to do so . Watch when the old PLP's surface to feather their nests and face the exact same problems as the FNM ,unless Gay Fred has magic money seeds.