The KDK Report: Shot five times at 78 - his good health helped him survive

Before moving back to The Bahamas, I trained and practiced medicine at hospitals in Canada and the US, ultimately becoming the chief resident for foot and ankle surgery at Mount Sinai Hospital in New York. It was there that I was taught to inspect the operating theatre before every surgery. I learned the importance of speaking to the nurses, scrub technicians and the anaesthesiologist and to introduce myself to anyone that I hadn’t worked with before.

I always checked the equipment and then verified all the surgical supplies were available and sterilised. And finally, before going to speak to the patient in the holding area, I looked around the room; in all its quiet and splendour, and thanked God for the opportunity to help someone in need.

I imagine most surgeons have either the same or some inherently similar ritual which they conduct. I also imagine the surgeon who operated on the patient discussed herein offered a post-surgical follow-up prayer of thanks.

In 2016, around four-o’clock in the morning, and at 78 years of age, my patient was shot five times. His past medical history was significant for high blood pressure but it was well controlled with diet and without the need for medication. He never underwent any previous surgeries and had never been admitted to the hospital prior to this incident. A proud son of the Eleuthera soil, he migrated to Nassau with his parents and worked tirelessly until his retirement in 1990. 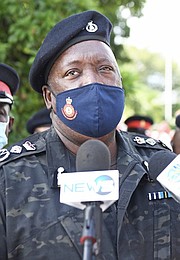 His wife’s friend was celebrating her birthday and they attended a party in her honour. It was a different time; one where friends and family could gather in crowds of greater than ten. A time when we congregated maskless and were eager to embrace without fear of the consequences such semblances of affection might in future inflict.

They had a great time with friends and got home late. Not long after going to bed they were awoken by their dogs barking ferociously. My patient walked toward his kitchen and car port and after seeing a shadow move, he quickly yelled out and was blasted with gun shots. The shooter never spoke and was never apprehended.

The first bullet felt like a burst of fire as it tore through his clothing and flesh. The others, which successively penetrated his groin and stomach, didn’t hurt at all. He was fortunate enough to be shot with the type of bullet that stays intact as opposed to others that explode on entry and scatter shrapnel debris throughout their path.

His wife who had heard the commotion was right behind him. He fell back to protect her and hit the ground but remained conscious. While lying there for what could have been seconds or minutes, he felt like he was in a trance and he heard a loud voice say “Get up”. He believes to this day that it was the voice of God. As he lay there, with his wife of 38 years by his side desperately trying to control the copious amount of blood exiting his body he felt a calmness. No fear, no pain – just peace.

Two years prior to this incident his sister was murdered and then burned in a savagely brutal and senseless attack so the thought of another tragic loss within their family was almost unbearable to contemplate. He was transported to the hospital via ambulance and taken to surgery immediately. Doctors suspected he would not survive the night but he did survive and today is as healthy and happy as ever.

Police Commissioner Paul Rolle invites at least one member of every household throughout The Bahamas to visit the Royal Bahamas Police Force website (royalbahamaspolice.org) and familiarise themselves with their home invasion survival tips. He emphasises that parents and their kids should always ensure doors and windows are locked and secured. In the event of an intrusion, he reminds us to stay calm, try to escape and scream if neighbours are around to hear. Barring any of those opportunities, he insists individuals just be compliant until the opportunity to escape arises. He reminds us that any valuables lost can always be easily replaced, but life cannot.

There was a time, I’m told, not that long ago when Bahamians throughout our archipelago could leave their homes and cars unlocked without fear of being victimised. Today, however, criminal activity is much more profuse and only our remote family islands persist relatively unscathed. As such, and with the Christmas holidays looming near, there is a higher impetus on us all to remain more vigilant of our surroundings given the tough economic challenges many families across our country face.

Worthy of note, the act of verifying that all his doors and windows were secured and installing security cameras and bars may have spared this patient the violence he encountered. Moreover, it is incumbent upon me to elucidate that despite being 78, the fact this patient was so healthy contributed immensely to his successful outcome. This easily therein underpins the essentiality of maintaining a healthy lifestyle no matter your age. Needless to say, stay safe, healthy and God speed.

• Nicknamed ‘The Prince of Podiatry’, Dr Kenneth D Kemp is the founder and medical director of Bahamas Foot and Ankle located in Caves Village, Western New Providence. He served as the Deputy chairman for the Health Council for five years and he currently sits on the board of directors for the Princess Margaret Hospital Foundation in his role as co-vice chairman.