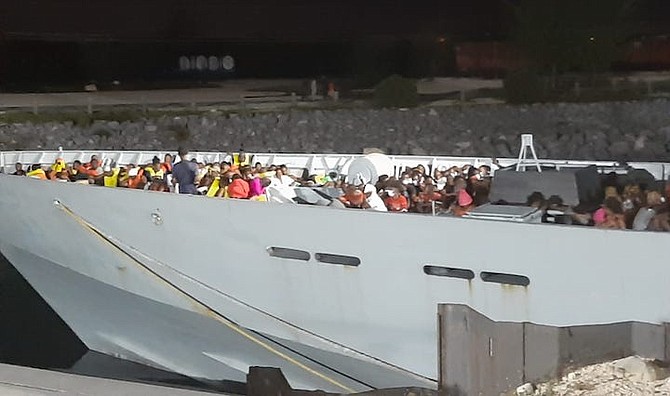 The apprehension was a joint effort by the Royal Bahamas Defence Force and Operation Turks and Caicos Bahamas (OPBAT) operatives.

Shortly after 8pm, HMBS Bahamas, under the command of Senior Lieutenant Alexis Brown, was transporting 70 migrants when they spotted a Haitian sloop five miles west of Inagua. With the assistance of OPBAT operatives, the RBDF vessel was able to positively locate the sloop.

Further investigation of the Haitian sloop uncovered 151 migrants (123 males, 28 females) onboard, who all appeared to be in fair health.

With the assistance of the RBDF maritime unit in Inagua, this latest group of migrants were also taken to Matthew Town and handed over to immigration officials for processing.

This makes a total of 307 Haitian migrants apprehended within a 48-hour span.

I think theyre trying to get to the US. The word is out that the US is accepting Haitian migrants. Not true but...

And they're not parasites. They're hungry frightened desperate people. Just like the Bahamians in Abaco and Grand Bahama were during and after Dorian. Those Bahamians were also left with nothing. The only difference is the Haitian disaster has lasted decades.

I agree with you that the world needs to find a solution to Haiti, The Bahamas cannot bear the burden, its literally impossible. The major problem right now is the refugee dilemma is exploding everywhere, Tigray, Ukraine, Sudan, Afghanistan, Thailand the need is amassing faster than the resources and response

This is a National Security threat. We have a growing population of angry disaffected people living among us. There has to be a way to assimilate those who should remain, remove those who should not be here and then prevent further encroachment

They say we need the manual labour. My question is what happens to the migrant who's done manual labour for 30 years in the Bahamas and can now no longer work? Can he really live off national insurance? Do we send him back to Haiti after we've exploited his youth?

After the PR backlash from the inhumane treatment of Haitians at the Texas border last week, its likely more boats will be coming as the US was "forced" to give safe harbour to the majority of the refugees. Do we allow the migtant population here to grow until its larger than the Bahamian population?

Our population growth strategy should be based partly on humanitarian objectives but mostly on talent that helps the economy grow and that includes victimization free opportunities for talented Bahamians so they remain in country. Growing tge population solely on a manual labour force is a recipe for disaster.

These are questions for National Security. Hence the requirement for thinkers.

No doubt word has spread faster than COVID-19 along the northern coast of Haiti that Fred Mitchell is now minister of foreign affairs. Just think how many more Haitian nationals will shortly be coming to our shores. Brace yourself!

The population of Haiti is nearly 12 million people which means we really don't have a hope or a prayer of surviving the swarms of Haitian nationals that will continue to head our way, exacerbated by the evil profiteering thugs engaged in the transnational trafficking of humans. Most of these Haitian nationals hope to move on to Florida but way too many of them will end up living and propagating right here in our very small nation that simply does not have the means to absorb them.

Even now it's easy to see that all semblance of the way of life experienced by generations of Bahamians is rapidly coming to a sad end. Already more and more Bahamians are going abroad each year with no intention of returning to live in The Bahamas. The initial slow brain drain has in fact turned into a flood of exiting, or should I say fleeing, Bahamians in more recent times.

For decades our geographical proximity to the US proved to be both a blessing and a curse, but the curse has sadly proven to be the much stronger of the two.

How could the RBDF allow invaders to reach within five miles of our shores, we had better do better, or else we would have a situation like in Texas only we don't have the resources to deal with it like the big boys do and fly them all out in a matter of days.

Inagua sure is busy...pilots with suitcases of cash and now boat loads of migrants happy and applauding.

Looks like they think the new government will let them in

Biden said there should be a surge at the US border if he won, the Haitians are responding. They've been watching the South and Central Americans pouring in for months. Now the Bahamas will be getting invaded for the next 3 years.

Nothing to do with Biden. Apparently some immigrants deemed "vulnerable" were allowed in by standard practice and it started a rumour that the US was allowing migrants in. Many Haitians who sought refuge in South America since the 2010 earthquake and were facing racial discrimination and increasing govt anti immigration crackdowns decided to make the journey in hopes of better opportunities

R U KIDDING!! THIS HAS EVERYTHING TO DO WITH BIDEN.

Bahamians have been totally fed up with illegals for years. If the Haitian invasion is not stopped it would lead to the downfall of PM Davis!

Minnis, Bannister and other key cabinet ministers not doing nearly enough to address the 'bounce back' of shanty town dwellings in Abaco, Grand Bahama, Andros and elsewhere certainly weighed heavily in the outcome of the recent general election.

"In late August, Nephtalie and her husband, still waiting in Chiapas, began to hear a rumor spreading around the Haitian migrant population living across Mexico. From interviews this week with other migrants in Del Rio, and conversations with attorneys who have met with dozens more, it seems that many people had the same experience. The rumor went like this: First, information went around that, while most of the border was closed, U.S. immigration authorities were allowing people to cross and ask for asylum in Mexicali — on the border with Calexico, California — and in Acuña, the Mexican city across from Del Rio. (This was not true, but it spread like wildfire among people yearning for a glimmer of hope.) Second, the rumor said that Sept. 16 would be the best day to travel. That would be Mexico’s Independence Day, and migrants figured that the Mexican authorities, who have bowed to U.S. pressure to more stringently police immigrants in Mexico, would be preoccupied "https://www.google.com/amp/s/www.poli...">https://www.google.com/amp/s/www.poli...

"They started an immense and arduous odyssey, taken by hundreds of thousands of people over the last several years, out of South America: Buses through Chile to Bolivia, a long trek through mountains, a boat over Lake Titicaca into Peru, and then more buses and more walking. Bit by bit, they made their way northward. In Panama, migrants must face the Darién Gap, a 50-mile stretch of swamp and jungle too dense for any roads, and incredibly dangerous to get through. Nephtalie says she entered with a group of nine. Only five made it out. She watched fellow travelers swept away during multiple of the many river crossings, potentially joining the hundreds of migrants who have lost their lives there to the river, snakebite, thieves or starvation."

This is a nightmare journey

BS. George Zoros and his billionaire buddies have been funding NGOs which have been making the trip northwards of hoards of migrants much easier than most people will ever know because of their control over most forms of the corrupt main stream media.

Assuming the evil NGO'S are doing this, they never touch everybody. The need is always more than the dollars. I guarantee someone"s" walk through the jungle