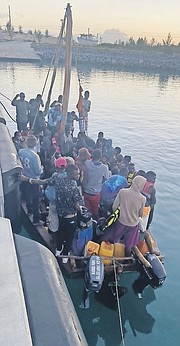 HUNDREDS of Haitian migrants were detained over the weekend.

IMMIGRATION and Labour Minister Keith Bell said yesterday that the government is hoping to repatriate over 900 Haitian migrants who recently entered the country illegally by the end of this week.

According to Mr Bell, plans are already underway to facilitate repatriation exercises to Haiti.

However, before the group is returned home, he said certain logistical issues must be addressed as transport resources are currently limited.

“We anticipate repatriating 916 back to Haiti by the end of the week,” Mr Bell told reporters. “Now that is very aggressive and that depends on whether we get the cooperation of the United States of America in terms of providing us with a carrier and that is contingent upon whether we are able to take one or two planes out of the fleet of Bahamasair to repatriate.

“That is contingent upon whether we are able to get the cooperation of the Haitian government to repatriate and, of course, we know that in the past, they turn around very, very quickly in terms of accepting their residents back.”

Since Wednesday, more than 900 Haitian immigrants have been apprehended by the Royal Bahamas Defence Force along with other local officials after being spotted in Bahamian waters.

Of this group, a total of 221 Haitian nationals were apprehended on Thursday, 86 on Friday, another 50 on Saturday and 144 on Sunday for a total of 501 – the majority of whom are now in Inagua.

In another incident on Sunday, officials apprehended 415 migrants in the Ragged Island chain after its vessel was spotted partially submerged off Flamingo Cay by local fishermen.

“The Haitian vessel had sank and the HMBS Knowles is currently deployed down there along with a number of other personnel from the Defence Force, the Royal Bahamas Police Force, the Ministry of Health and other state agencies,” Mr Bell said of the incident yesterday. “They are currently conducting health checks of these individuals and they’re supplying them with water and food and housing. Those individuals will likely be brought to the capital.”

As it relates to those migrants in Inagua, Mr Bell said those individuals were expected to be charged yesterday and added officials anticipate they will be repatriated as early as Wednesday.

Their illegal travel to The Bahamas comes as civil unrest and political turmoil continues to mount in Haiti following a devastating earthquake and the assassination of former Haitian President Jovenel Moise in July.

Neighbouring countries such as the US have also seen mass migration from Haiti in recent weeks.

On Sunday, Foreign Affairs and Public Service Minister Fred Mitchell warned that a “humanitarian crisis” could possibly result in Inagua if the situation is not addressed in a timely manner.

Yesterday, Mr Bell agreed it was important for the government to act as quickly as possible, noting that more Haitians could arrive in the country soon, compounding the already precarious situation.

“There (are) a total of 501 migrants now in Inagua,” he said. “There (are) 415, and the numbers may change, that is on Flamingo Cay and that’s a total of 916 migrants that we have in custody. They are being kept and that adds to the number of ladies and gentlemen at our Detention Centre. There is, I think, just over a 100 or so there now.

“As you also know, the repatriation exercises (are) an ongoing process. That hasn’t stopped and because of the numbers, we’re ensuring that we get them out as quickly as possible. “What we intend to do is to also reach out to our US counterparts to see whether or not, we can ask one of their carriers to take all of the persons back from Inagua to Haiti in one trip, but again as I indicated, I can’t speak definitely on that as yet but we are also pursuing that angle,” the immigration minister added.

Asked how long the government can keep the group detained, Mr Bell said: “We can detain them indefinitely, but we don’t intend to do that. We have to get them back home and we intend to use all of our resources and our channels through diplomatic resources to make sure that happens as quickly as possible.”

He further noted that various tests have been conducted on migrants for the detection of COVID-19 and other diseases but said none of the results so far have created any cause for concern.

“There is among the group, we know that there was some dehydration and one or two other aspects that we’re dealing with what is usually the case when they come across on these long voyages with these crammed vessels and they’re coming from parts of Haiti but we have not come across any case to date that warrants extreme concern that there is COVID among them,” he said.

Yesterday, Mr Bell said the government is committed to ensuring migrants are treated in a humane manner.

It is not clear, however, how much housing accommodations and repatriation exercises, etc, will cost the government.

“I cannot give you a figure, but the longer we keep them here the more it will cost the government so we are doing everything we can,” he said when asked about the issue.

... if we send back about 9000, some Bahamians might be able to find some jobs, there would be less crime and strain on the educational and healthcare systems and less burden on the public purse. Could be a win win for us in these challenging times!!

Bell is doing what he does best, i.e. giving the problem plenty of lip service out of one side of his mouth while giving umpteen excuses out of the other side of his mouth as to why he can't get anything done. He perfected the art of doing this while he had responsibility for national security under Dr. Bernard Nottage.

Hold on -- we $10 billon in debt but we don't have one carrier that could be used to repatriate illegal immigrants and/or evacuate folks off of islands prior to or after hurricanes?

Can we fix up the partially submerged boat off of Flamingo Cay???

Sorry for them, sorry for us too. The first thing on the agenda of a new government of Haiti should be population control. That nation takes procreation to an off the charts level!

And many of us fear all the sip-sip on the streets that Keith Bell may have close ties to a criminal organization involved in trafficking humans, drugs, arms, etc. out of Haiti. As most Bahamians know only too well, where there's plenty of smoke there's usually a fire; accordingly, this matter should be investigated, but by whom is the question.