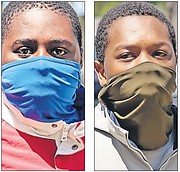 A MAN and a teenager were yesterday remanded to prison accused of killing a man and attempting to kill another earlier this month.

Jawaun “Fat Boy” Armbrister, 20, and Damutri “DJ” Thurston, 18, appeared before Chief Magistrate Joyann Ferguson Pratt after they were accused of unlawfully and intentionally causing the death of Devante Brown on September 18.

Prosecutors alleged that the men also attempted to kill Valverde Butler and used a firearm to endanger the lives of Mr Brown and Mr Butler on the same day.

Due to the nature of the offences, Armbrister and Thurston were not required to enter pleas and their case was adjourned to December 15 for service of a voluntary bill of indictment (VBI).

In the meantime, they were both denied bail and remanded to the Bahamas Department of Correctional Services.

They both have a right to apply to the Supreme Court for bail.

In a separate matter, Frederick Heastie Jr, 28, was accused of trying to kill Desir Bien and Cindy Amisca on September 25.

Police further accused him of using a firearm to place Mr Bien and Ms Amisca in fear of their lives that same day.

He returns to court in January 2022 when he will be presented with his VBI.

When Heastie, Jr, appeared before Senior Magistrate Carolyn Vogt Evans yesterday, he was also charged with threatening to kill and assaulting Philoxes Amisca with a deadly weapon on April 17.

He denied the allegations and that matter was adjourned to November 24 for trial.

Due to the murder charge, Heastie Jr was denied bail and remanded in custody.