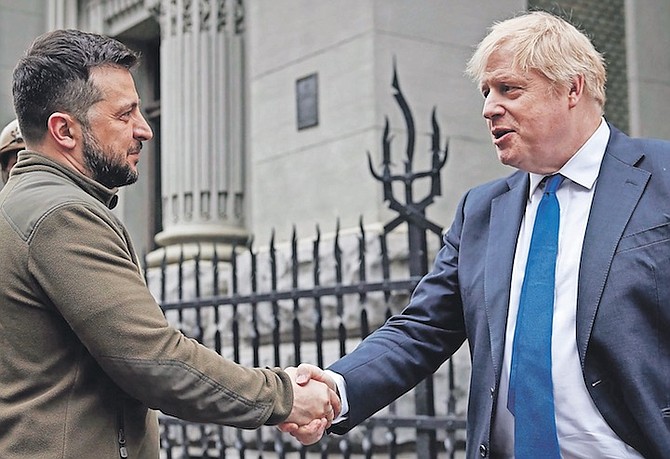 WHAT to cover in a weekly column needs to be determined well in advance in order to leave time for research. While the world is watching the war in Ukraine play out in all its grisly reality, I had planned to write today about the failure of the United Nations – a body whose principal function is to maintain world peace – to take meaningful action to stop it. But, although still covering that issue, it seemed important to draw attention mainly to the unexpected news, revealed at the weekend, of the visit to Ukraine of British Prime Minister Boris Johnson.

For obvious security reasons, the planning of his trip to Kyiv on Saturday was kept carefully under wraps, so it came as a total surprise to the general public. It followed hard on the heels of an earlier visit the same week by European Commission President Ursula von der Leyen.

Even though Moscow has pulled back its forces from Kyiv for redeployment in the eastern Donbas region, this was a high-risk visit which included a walkabout in the capital with the Ukrainian President. Reportedly, Mr Johnson himself was intent on making the trip despite the dangers of going in to what is still a warzone and he is the first G7 leader to travel to Kyiv since the Russian invasion on February 24. For the last part of the journey he travelled by train from Poland.

The PM’s trip came shortly after the announcement of further substantial UK military assistance for Ukrainian forces including anti-tank and anti-aircraft weapons and so-called “suicide drones”. It also took place after the discovery of the mass killing of civilians in different parts of the country -- atrocities that are being described as nothing short of evil for which the perpetrators must be held accountable. Mr Johnson himself has said that because of these war crimes Putin’s reputation will be “permanently polluted”, as Russia becomes increasingly isolated in the global community.

It is said that he and President Volodymyr Zelensky have struck up a close working relationship with regular contact through telephone calls following the latter’s heartfelt and highly effective address last month via video link to the UK Parliament at Westminster.

At their face-to-face meeting on Saturday, the PM said he wanted to discuss the UK’s long-term support to Ukraine. He set out a new package of financial and military aid and pledged 120 armoured vehicles together with anti-ship missiles. He praised Zelensky’s resolute leadership, saying to him that “the Ukrainian people are a lion and you are its roar”, with the Ukrainian leader heaping praise on him in return by responding that the UK would “go down in history” and calling Boris Johnson “one of the most principled opponents of the Russian invasion, a leader in sanctions pressure on Russia and defence support of Ukraine”.

But all this is against a background of the continuing need for NATO unity in the West’s response to Putin’s unprovoked and unjustified attack as well as a coordinated approach to ending the EU’s energy dependence on Russia. Equally significant has been NATO’s self-imposed limits on any action that could precipitate a wider war, including restrictions on the type of military involvement in the shape of equipment, weapons and other support.

It seems that these limits may have been broken by some individual countries through their provision of individual support -- including, for example, tanks and rocket launchers supplied by the Czech Republic. It is the case, of course, that details of military support, weapons and equipment are not made available to the general public. But, following Boris Johnson’s visit, questions are being raised in the UK press about whether Britain is keeping in line with NATO’s overall response or is it breaking the unity of the organisation.

Critics also wonder about the purpose of his visit. Was it just to show solidarity or did he hope to achieve anything specific? For those responsible for his safety, it must have been a security nightmare. Was the British PM displaying bravery and real leadership as a statesman in a world crisis or was it simply a PR stunt? Was it heroic or downright reckless and unnecessary?

Views vary about the need, effectiveness and wisdom of Boris Johnson’s readiness to travel to Kyiv in such potentially dangerous conditions. I, for one, believe he should be applauded for taking this initiative. Meanwhile, a quick check reveals that the numerous comments from readers which UK newspapers publish in response to their articles seem to be generally positive to the extent that the PM is seen by many to be doing Britain proud by becoming so directly involved. What is more, historians remind us that, despite the threat to his personal safety, Churchill regularly flew to hotspots during the Second World War in order to see for himself what was happening and thus be better equipped to take military decisions to hasten the ending of the war.

But, despite differences of opinion, one thing is for sure - the so-called Brexit-bashers who said that the UK’s withdrawal from the European Union would lead to national isolation in a country led by a clown have been proven, at the very least, to be well wide of the mark.

Returning to the collective failure of the UN with its 192 member states to take effective action to end the Ukraine war, it is generally agreed that this is the biggest crisis for the organisation’s authority – practical, moral and legal – since the US-led invasion of Iraq in 2003. The UN Secretary General has called it one of the greatest challenges ever to “the international order and the global peace architecture”.

For many people, it is shocking that the principles enshrined in the UN founding charter in 1945, primarily aimed at upholding peace among sovereign states, have been torn up by Russia, with the Kremlin ignoring pleas by the Secretary General for an immediate end to hostilities and at the same time brutally disregarding the established humanitarian laws of warfare.

In the 1930s, the League of Nations gradually failed as it was unable to maintain global peace, not least because the US never joined it. The UN then emerged from the ruins of the Second World War, with the clear motivation among its signatories that the horrors of the worst and most destructive global conflict in history “must never happen again”. The UN preamble speaks of a determination that succeeding generations should be saved from the scourge of war and that it is essential to maintain international peace and security.

The Putin regime has ignored these obligations, and China has also failed to abide by the UN Charter, while countries like India have been sitting on the fence in reacting to Russia’s invasion. At the beginning of March, the UN General Assembly adopted a resolution demanding that Russia immediately end all military operations but this was ignored by the Kremlin. Three weeks later it passed another resolution insisting on aid agency access and the protection of civilians. This was likewise ignored.

The 15-member UN Security Council – five of whom are permanent members (US, Britain, China, Russia and France) and have the power of veto over its decisions - has already proved its impotence. In the days following the invasion a resolution condemning it failed after being vetoed by Russia. In addition, the UNSC is unable to initiate action in response to President Zelensky’s call for it to take measures to stop the genocide. However, at least the UN Human Rights Council, which voted last week to suspend Russia from it, has reportedly started an investigation into the invasion and war crimes.

Others, who know more about the history of the UN and are more familiar with its proceedings than I am, may not agree but I believe there is a broad school of thought that, if the organisation as currently set up is unable to act decisively when the international rules-based order is broken, it is little more than a talking shop and needs to be reformed – though, of course, the UN does much good work in other areas through its specialised agencies.

One idea is to enlarge the UNSC’s permanent membership to include countries like Japan, Brazil, India, South Africa and Germany and to abolish the veto. This has been under discussion for years. But, looking at the bigger picture, many people believe that now is the time to convene a new foundational conference like that in San Francisco in 1945 in order to relaunch the UN as an organisation to operate in ways that reflect the global power balance and priorities of the 21st century.

President Biden is on record as saying in advance of Russia’s invasion that it would “bring a catastrophic loss of life and human suffering” and that the US and its allies would respond in a “united and decisive way”. This is what has happened. But, because of Russia’s veto power, the UN can do no more than condemn that country rather than take harsher action against it. In Britain, there are now calls for Russia to be stripped of its veto and even removed from the Security Council. The evidence suggests that more and more people consider it extraordinary that just one country with nuclear weapons can decide to annex another country and the UN can do nothing meaningful to stop it – even taking into account the danger of escalating hostilities through military action and starting a wider conflict.

SCOTTIE SCHEFFLER, left, and Rory McIlroy in action at the Masters.

AUGUSTA AT ITS BEST

Does it get any better than this, asked the commentator during the weekend play at what is the pre-eminent event in the world’s golfing calendar - and he was not exaggerating. For golf lovers, there can be few finer experiences than watching a sunlit final day of the annual Masters tournament at Augusta National in Georgia where victory is the pinnacle of golfing achievement.

By common consent, the setting and atmosphere are unmatched, and this year was no exception. So what a joy it was to follow the excellent TV coverage, in particular the closing stages on Sunday afternoon.

The fact that Irishman Rory McIlroy seemed to come from nowhere to challenge the ultimate winner, Scottie Scheffler from Texas, made it that much more interesting for those of us originating from across the pond. Even though he ended up three strokes behind, what an amazing performance it was by McIlroy to card 64 – matching the lowest score ever for a final round at the Masters - including holing a stunning bunker shot on the last green.

In 2019, Tiger Woods at the age of 43 came back after a string of injuries and personal problems to claim a spectacular victory by a single stroke and earn his fifth Masters title. This year, after recovering from serious injuries from a nasty car accident, he not only entered but played well enough to make the cut, though his game fell away on Saturday because – in his own words – he missed too many putts. This was the 25th anniversary of his memorable victory in 1997 when he was only 21 - and, apparently, because of continuing walking difficulties it was something of a miracle that he managed even to participate.

At the risk of repeating what I wrote in this column three years ago, even those with little interest in golf or knowledge of the game will surely acknowledge the high quality and excellent organisation of this amazing annual sporting event which attracts huge numbers of spectators. The Masters is a fine example of the best that America has to offer.