In WNBA, Jonquel Jones and Sun begin preseason on Sunday 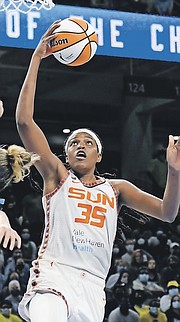 EXPECTATIONS loom large for reigning WNBA MVP Jonquel Jones and her Connecticut Sun as the franchise is expected to be a major contender once again in pursuit of its first title.

The Sun open their 2022 campaign at 1pm Sunday when they host a pre-season matchup against the Atlanta Dream at the Mohegan Sun Arena in Uncasville, Connecticut.

It ended in disappointing fashion with a loss to the eventual champion Chicago Sky in the semifinals.

“We’ve been talking about championship or bust, last year was a bust because we didn’t get a championship,” Jones said during training camp. “This year is the year to finish things and we feel that and we know that.”

The regular season opener will be May 7 on the road against the New York Liberty and the home opener follows on May 14 when the Sun host the Los Angeles Sparks at the Mohegan Sun.

UMMC was among the group of Russian clubs disqualified from the FIBA EuroLeague Women 2021- 2022 season. Jones led the Foxes to an undefeated regular season and the top overall seed in both the EuroLeague and RPL.

She reportedly makes more in a month playing for Ekaterinburg than she does an entire season in the WNBA.

“I’m going to have to deal with it. Because I feel like while the league is making the right and necessary strides to pay us more and ensure that if we don’t want to go overseas, we don’t have to, I just feel like in my situation, the money is not comparable,” Jones told ESPN.

“I have to think about the financial status of my family and everybody else, and also the opportunities that I’m leaving if I don’t go.”

A short offseason in Russia meant Jones had the rare opportunity to be present at Sun training camp this year.

The Sun currently have six players that are either reigning or previous All Stars.

Sun head coach Curt Miller said the team’s depth will be its strength.

“There’s going to have to be really honest dialogue in the locker room. We know JJ needs touches, at the same time [Alyssa Thomas] is our engine and Courtney [Williams] I believe always has the ability to be a leading scorer on a team. And then you would be crazy not to play through Brionna Jones, one of the most efficient players in the league. And we haven’t even started to talk about [DeWanna Bonner] or Jasmine [Thomas]. … And then some up and coming young pros around those six players,” he said to the Hartford Courant.

“My challenge is to put the best five players on the floor at times. What does that look like? Maybe some unconventional lineups. Could you have some ginormous lineups on the floor to potentially in some ways get your best lineup on the floor? … That’s what we didn’t have the luxury to do last year.”

Jones opted out of the shortened 2020 season due to COVID-19 concerns but returned in 2021 to deliver the best season of her career.

In addition to league MVP, she was also named to the All-WNBA First Team, All-Defensive First Team, the Associated Press Player of the Year and AP First-Team Honours.

She also won the WNBA Peak Performer Award as the league’s top rebounder for the third time in the last five seasons and was named the WNBA Eastern Conference Player of the months of May, August, and September.

The 2022 WNBA season will be the league’s 26th edition. Planned changes to the league’s schedule included an increase to 36 regular season games for each team, which is the most games ever scheduled in a single WNBA season.

This postseason will also be highlighted by the return of an all-series playoffs, which was last used in 2015.

There will no longer be two rounds of single-elimination games, with byes into the second round for the third and fourth seeds and into the semifinals for the top two seeds.

The first round will now be best-of-three series and involving all eight playoff teams and played with a 2–1 format.

The higher seed will host the first two games. Also, the playoffs will not be reseeded after the first round.