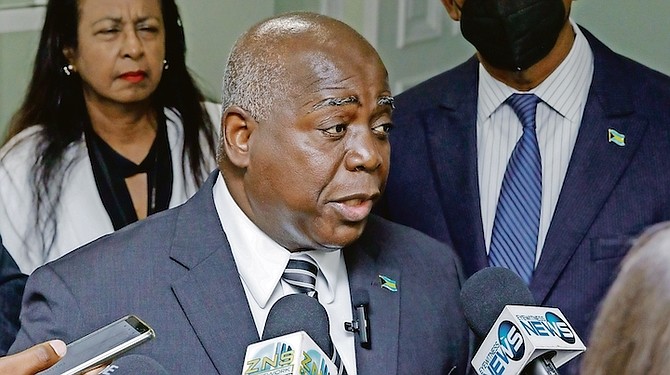 PRIME Minister Phillip “Brave” Davis insists his administration is living up to promises it made to nurses and teachers despite the opposition’s claim that the government has failed to adequately address their concerns.

On Wednesday, Free National Movement leader Michael Pintard accused the government of not having a proper plan to address the key issues facing the agitated workers.

He said examples of this could be seen in the unions’ rejection of their proposals for salary increases and retention bonuses as outlined in the 2022/23 budget.

“The budget was released and the Prime Minister promised to address some key areas that are affecting us,” Mr Pintard said.

“One (was) education. He got a standing ovation talking about what he intends to do for educators and to retain them. Obviously, he did not have a serious conversation with them because they are right on the brink of industrial action because no sensible package has been presented to educators to show that this administration is serious about properly compensating educators for the incredible work they’re doing and retaining them.”

Mr Pintard said the same approach was being taken with nurses, adding the nursing shortage has worsened since the Davis administration took office.

However, Mr Davis responded to the charges yesterday, saying he was satisfied his promises to nurses as it relates to backpay, and other issues had been fulfilled.

He also noted that other outstanding matters related to teachers’ industrial agreement were being addressed.

“I gather that the message that was left out there by the press conference is that I did not fulfil the promises that I made to the nurses and the teachers, but far from it,” Mr Davis sai

“If they were able to identify specifically what I promised and didn’t fulfil, I would have been able to answer them more specifically and suffice it to say what I did promise to nurses is whatever they were owed in respect to the promises made and contractual arrangements made, I would be satisfied that has been done. We paid them all their backpay and all sums that were due to the nurses, that was done.”

The Prime Minister also said: “In respect to promises made and in respect to their going forward for increases in salaries, if they would have listened to me, we have budgeted for the eventual increases in salaries for both teachers and nurses. It’s a question of settling the agreement with the union as to what those amounts would be going forward and that is an ongoing process and from my understanding, we’re very close to dealing with those issues.

In June, members of the Bahamas Union of Teachers voted unanimously to take industrial action following an impasse with officials over an expired industrial agreement.

But none was taken because consideration was given to internal exams, external exams and report cards.

However, last month, BUT president Belinda Wilson told teachers to get ready to take industrial action on August 22, saying the government had ample time to bring closure to several matters of concern for educators.

“You have worked overtime and ensured examinations were held and the report cards were completed,” she said in a recording sent to teachers. “Be advised that I will not be signing any subpar, incomplete or partial industrial agreement.”

“I will sign off on the financial proposal and the full industrial agreement that you, the members, voted for us to accept and for me to sign off on.

“I am saying to you today that the government has had ample notice. They’ve had sufficient time for us to conclude and sign off on a full agreement”.

Can someone please explain how this 'back pay' issue always arises and what exactly it is? Is it that government hasn't paid people a salary over a certain period? Or is it that govt hasn't paid the increases in salaries promised - and the difference remains outstanding? Or is it that new hires haven't gotten paid since started working? I just don't see how an entity cannot pay was is due FOR YEARS at a time.

Promises are a comfort to a fool.

Bahamian politicians have played teachers and nurses for many years, now hiding behind Dorian & Covid.

Davis thought he had all of the answers. Now it's time to pony up and stop filibustering. Summer is almost over.

Mr: Davis should never allow Mr: Pintard to be behind his back. Pintard is a very desperate man

... Davis should never allow Freddy boy behind his back. He might end up with Monkeypox!

No that's friggin funny!!!! With 90% of Bahamian men being gay or bi (heard directly from an x-pat who was leaving the island and said he knows this first hand - yikes) we could be in some real trouble with monkeypox. That'll spread through this ENTIRE community very quickly.

Just another by-product of our new national Haitian identity and culture thanks to the likes of roly-poly Davis and Fwreddy Boy Mitchell.

Is there nothing a colony's premiership learn from respected financial  observers forecasting, both the United Kingdom and the USA are among countries heading for a three-year long recession .... How is it that our own colony's economy goin' be so much more prosperous __ Or shouldn't our own popoulaces not worry that their monthly grocery and electricity bills alone will eat up thirty percent take home earnings ----Yes?