Every human being, at some point or another, is called to the spotlight. In that moment you finally feel noticed and, in the best of circumstances, appreciated publicly for either your talent or physical attributes. This is the moment when stars are born. The very best of us excel during those moments and, from then on, spend a lifetime living beneath the intense glare that’s demanded by being at the centre of the stage.

There are those who crave notoriety and will do anything for attention. But others, like myself and Danielle Grant, the patient highlighted in today’s report, are completely satisfied with just being loved and appreciated by our family, friends and pets. So, in 2018, at the age of 23, to the surprise of herself and her family, Danielle reluctantly entered the Miss Bahamas Universe pageant. As an owner of four dogs and four cats, her platform was animal advocacy and her initial intention was to bring more awareness to animal rights. 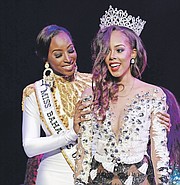 DANIELLE Grant after being crowned Miss Bahamas Universe in 2018.

As a child, Danielle describes herself as much quieter than she is now. Her father was a drummer for the popular and internationally renowned Bahamian group, Baha Men, so growing up she’s always had a keen interest in the entertainment industry, but mostly in the background. Sensing her shyness, her mother enrolled her in the Yodephy dance and modelling academy at the age of three and her confidence quickly grew. At that time, little did she know that years later she’d be modelling at the Baha Mar hotel when a photographer urged her to enter the pageant. It was a runway moment that would change her life forever.

That same evening, Danielle saw a flyer on social media and dismissed the notion while discussing it with her best friend. But instead, her best friend told her to participate and that one moment of support was all the encouragement she needed.

Danielle quickly discovered how expensive pageants are for participants and because she felt like she wasn’t the favourite to win, she again questioned her decision to compete.

But the fact that she was so passionate about her platform, she persisted. With each stage of the contest, she excelled and began to feel more and more confident that she could ultimately win.

Then one day while returning home from one of the series of competitions, she tripped and fell. During this sudden twisting motion, her right leg and foot slammed against a rock with explosive force. The heel of her shoe broke and Danielle heard an audible snap. The ensuing pain was excruciating. Within seconds the area became red and swollen and she couldn’t apply pressure without eliciting intense pain. The deep laceration along the top and side of her foot that extended to her ankle started bleeding profusely. She quickly applied pressure with a piece of cloth and managed to make it home with her parents’ assistance.

That evening, Danielle applied ice all along the affected lower extremity and went to rehearsal the following day, barely able to walk and incapable of wearing high heels. By the day after, she couldn’t move her foot. She knew her injury needed to be evaluated professionally though she dreaded the news with only two weeks left in the competition. Despite this, she went to a nearby clinic where an X-ray was performed and confirmed her worst fear. The doctor on call abruptly entered the room and told her that her foot was broken, she had to drop out of the pageant and that she was going to be placed in a full plaster cast up to her knee. Comforted by her mother, Danielle began to cry.

She pleaded with the doctor to allow her to wear a walking CAM boot and he reluctantly agreed while still telling her that he 100 perceent advised her to stop competing immediately.

Seeing the sadness in her eyes broke her mother’s heart so a few days later she remembered that she’d been successfully treated by me in the past for an unrelated foot issue and wondered if I could provide her daughter with a second opinion.

I advised the patient upfront that my cousin was also in the competition but that wouldn’t have any influence on my evaluation nor the prescribed treatment regimen. She nodded in agreement, still convinced that even if she had to hobble across the stage in a cast, she’d never drop out of the pageant. She was determined to fulfil this dream that a stranger with a camera had put into her head.

Another X-ray was performed in my office which, to my surprise, was negative for a fracture. At that time her swelling and pain had resolved entirely so I advised the patient that she actually had a bone contusion and a mild sprain. I then told her to discontinue wearing the boot and a foot and ankle bandage was applied instead for a few days. Icing and oral anti-inflammatories as needed were additionally recommended, particularly on days when she had to compete in high heels and prolonged weight bearing couldn’t be avoided.

On the night of the finale, within seconds, the room went dark except for the flashing stage lights that swung from the audience and then quickly and directly illuminated Danielle and the other two remaining competitors. The ballroom was silent and every onlooker, myself included, glared intently at the presenter to see who’d stand centre stage, after months of competing, and finally take home the crown.

My cousin placed 1st runner-up, so when Danielle realized that she’d won and was crowned Miss Bahamas Universe 2018, she was overcome with emotion.

Since that night, Danielle has been working with the Ministry of Tourism in Houston, Texas. She reflects on her journey with a deep sense of pride. The take home message that she wanted readers to take from her story is the value of pursuit.

If you want something badly enough, exhaust every option available to make it happen, even if it’s not immediately obvious, so that you’ll never look back with regret.

She admits it’s easy to get depressed or discouraged when you face a situation beyond your control and it feels l like the cards are stacked against you.

That’s exactly when your determination, grit and follow through will take you to places not yet imagined and successes you’ve only dreamed of.

Beyond that she recommends avoiding big rocks two weeks before an important event and to always get a second opinion if you don’t feel entirely comfortable with the first.

In spite of it all, she wouldn’t change a thing. Most importantly, she’d like to encourage consistent dialogue throughout our nation with reference to animal welfare issues in hopes that someday animal protection against abuse and cruelty will become standard practice.

Until then and determined to improve the world, she’ll always be a champion for animal rights and advocate against their cruelty, whether day or night, rain or shine and most assuredly while wearing her beloved high heels.

• Nick-named ‘The Prince of Podiatry’, Dr. Kenneth D. Kemp is the founder and medical director of Bahamas Foot and Ankle located in Caves Village, Western New Providence. He served as the Deputy chairman for the Health Council for five years and he currently sits on the board of directors for the Princess Margaret Hospital Foundation in his role as co-vice-chairman.