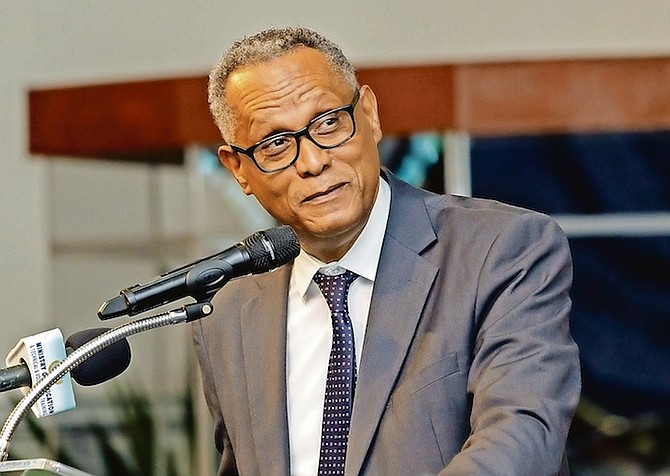 AN INDUSTRIAL agreement between the Department of Public Health and the Bahamas Nurses Union (BNU) was signed yesterday.

Some of the features of this new agreement include a retention bonus of more than $3,000 for nurses depending on certain criteria and various salary increases.

Additionally, nurses entering the public healthcare system will begin at a salary of $26,000 per annum with headroom for up to $30,000.

The agreement has a life span of three years and negotiations under the Davis administration took less than three months, BNU president Amancha Williams said.

In his remarks, Health and Wellness Minister Dr Michael Darville described nurses as the “backbone of the healthcare service” and assured that issues of other healthcare unions, such as junior doctors are being addressed while looking at legislative reform.

“I want the Bahamian people to know that we are working very hard to look at legislative reform, while at the same time addressing many of the issues that affect the employees that work at the Ministry of Health.

“Today, we are focusing on our nurses, but I want the junior doctors union as well as the consultant doctors union to know that their issues are being addressed. But I am so pleased to say that I am happy and excited for what we have accomplished together despite our differences in the best interest for the nurses of this country. The nurses in our country at the Ministry of Health and the PHA are the backbone of the healthcare services.

“They contribute. They go beyond the call of duty. They are in the frontline. They’re exposed to conditions that normal people are not exposed to.”

Ms Williams explained some of the benefits this new industrial agreement offers.

“Here in this industrial agreement, we created a retention plan where we’re offering a bonus, a retention bonus to all nurses in the Commonwealth of The Bahamas,” she explained. “In relation to the category that they fit in, they will receive a bonus. This bonus is over $3,000,” she explained.

“…..And we thank the government for another initiative which we’re very pleased about and everybody in DPH when they’re coming in, they will be coming in at a $26, 000 salary and so that’s an applaud for us. The beginning salary of a nurse in the United States is about 50 to 46. And so, when this industrial agreement will be completed, when we add it up, every nurse in the Commonwealth of The Bahamas will be making over $30,000 a year.”

“So, we’re pleased with that initiative and we’re happy because you can see that the nurses were only making $22,000. We went up to 26 and then we’re going to go up to 30. We’re climbing but also ask our nurses to give an understanding (it’s) based on economic challenges that’s how we do, we manage the funding to give you an increase. If there’s no money, we can’t give you the money.”

Another facet highlighted was pay from the government when the country is in disaster or has a hurricane.

“The government decided to agree on a new article that we’re very pleased with – a disaster and pandemic. This will allow when the country is in disaster or we have a hurricane. When the government says that we’re in a mode of hurricane or disaster, they will pay us $10 an hour,” the BNU president said.

She again mentioned a housing initiative for nurses. Ms Willams previously told The Tribune they have joined in with the Ministry of Housing, which has a listing already for almost 30 nurses who were approved and were just waiting for the homes to be built.

While giving remarks State Minister for Public Service Pia Glover-Rolle noted the importance of having an attractive package as the country is experiencing a nursing shortage.

“Everyone, prior to me, would’ve spoken about the shortage of nurses – that’s a worldwide issue,” she said. “So when other countries, the richer countries especially, try to poach our nurses we have to do all we can as a government to ensure that we are able to offer the strongest packages that we are able to afford to retain our nurses because obviously we want our nurses to stay at home and the only way that we can do that is to provide more attractive benefits to our nurses.

“Again we may not be able to match the offers but our efforts in negotiating, to come in good faith, to have an agreement where our nurses are comfortable and happy and where I like to say is a start in the right direction.”

Gina Dean, the Ministry of Health and Wellness’ director of nursing, said officials are hopeful that this new industrial agreement would hopefully encourage more nurses to remain in the public health system.