Everybody is a winner in Atlantis Health & Wellness Fun Run/Walk 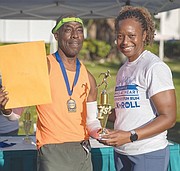 After a break because of the restrictions imposed by COVID-19, the early morning riser was back on the calendar and, according to Aisha Neely, the director of health and safety at Atlantis, although they fell short of their target goal of 500 participants, they were pleased with the more than 300 registered entries.

“Everybody looked as if they got in the walk and got a sweat as well,” she said, adding that their mission this year is to encourage a “better you” to ensure a “better us” in their community.

She noted that if their employees focused more on their own personal fitness level, it would only make Atlantis a more conducive environment to work in and hence foster a greater sense of pride into the community.

In addition to staging the run/walk from Montagu Beach, Atlantis also staged an in-house initiative that they coined the “Biggest Winner” weight lose competition in two categories.

For six weeks from July, the ‘Dynamic Duo,’ emerged as the group winners over the ‘Fantastic Four.’ The team called ‘Thinner Than You’ got third.

However, the biggest announcements came from the individual category where Kathleen Grant was quite emotional when she got her overall award and $2,500 for losing 40.9 pounds during the space of time. She beat out Davirian Barry from Aqua Venture and Edwardo Collie from Food & Beverage.

“I would like to give God all the thanks and praises. This has been a challenge and so I’m overwhelmed and grateful,” said Grant, as she tried to hold back the tears. “It took a lot of hard work and sacrifices to get the weight down.

“It was a tough journey for me, but I want to encourage persons to get on a health programme. It’s good for your body.”

Grant, who declined to reveal her age, only to say she’s getting close to retirement, said she was happy to represent the Atlantis casino as a croupier.

Hanna, a registered psychiatric nurse, said as a keen lover of running and dancing, she participated in the event because you want to continue to enjoy her life to the fullest and this is one of the ways she can achieve that.

“It was good. I’m glad the country is open so we can run and walk and enjoy activities in a safe environment again,” she said. Mackey Williams, 53, called it a “piece of cake” or a “regular” workout.

“Besides running, walking is what I do, so this was a piece of cake,” he said.

“It was a good course. It should have been longer. We should have gone to the golf course, but thanks to my heavenly Father, I made it. This is what I do.”

Providing some challenge for Williams was 51-year-old David Prabu.

“It’s been a while since we had a chance to compete like this, so it was good,” Prabu said. “The competition was stiff, but at the end Mackey got away from me. He’s the top gun, but one day I am going to get him.”

There wasn’t any competition for Eve Maycock-Dorsett as she comfortably controlled the tempo for the ladies’ segment of the run.

“The race was a good race. Atlantis is always a nice, easy four-mile race to run,” she said. “I didn’t have much competition, but I’m so proud of myself being 58 years old this year and still running a good pace.”

Christopher Saintus, a 17-year-old graduate of CI Gibson and a member of the 4-D Stallions Track Club, said he didn’t have much time to prepare having worked late the night before.

“I usually run with these guys, so the competition was there for a while, but I managed to get away from them,” Saintus said.

Roydon Miller, employed at Atlantis in their Security Department, said after his wife registered him and his daughter, he didn’t turn down the opportunity to support his family.

“It was a little rough because I haven’t exercised in a while,” said the 46-year-old Miller.

“I just kept walking. My daughter kept telling me ‘daddy you can do this,’ so I just kept pushing myself.”

Yvonne Sturrup, a teller manager at Atlantis, was the winner of the women’s short course walk race.

“This is my second time doing it and I enjoyed it,” she said. “It’s beneficial for me because the older you get, the more you push yourself, so I enjoy it.”

Edoney Russell, an 11th grader at St Augustine’s College, was the winner of the male youth walk.

“The bridge was a little tough, but other than that, it was fine,” he said. “It was fun.”

“This was a very good race. I really enjoyed it,” she said. “But the most challenging part was the bridge. But it was a good opportunity for me to stay in shape and take care of my health.”

• Award winners are as follows: