Officers 'were told to avoid Fernander' 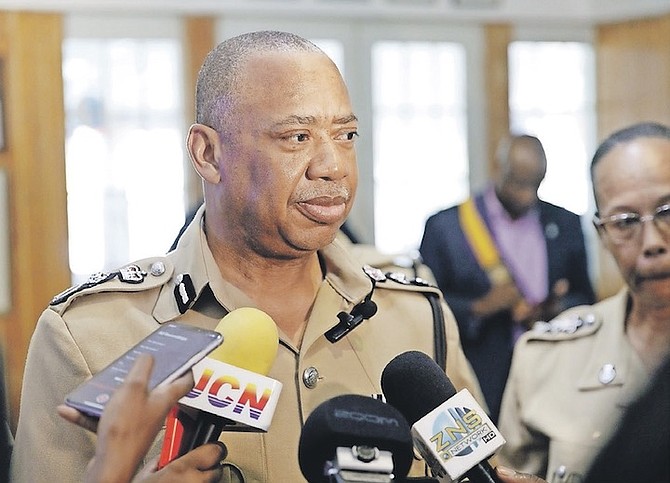 COMMISSIONER of Police Clayton Fernander says if he had not been “disrupted” by a forced leave and secondment in 2019, he would have been in his retirement by now.

Leaving the Royal Bahamas Police Force by way of retirement was something he was planning for.

He also revealed officers had been advised to stay away from him.

The Commissioner, then an Assistant Commissioner along with then-ACP Leamond Deleveaux, now Deputy Commissioner and ACP Kendal Strachan were forced to take vacation leave in 2019.

Although the former Minnis administration justified the vacation policy by citing fiscal measures, the officers believed the administration simply wanted to sideline them. When their vacation leave ended, they were sent on special assignments for a year.

The Commissioner is still searching for the reason behind the reassignment.

He made his latest comments as a guest on Jerome Sawyer’s television show “On the Record”.

“I’m still trying to find out today what really happened but if you were paying attention and you listened to what the retired Commissioner Paul Rolle had highlighted, it pretty much just speaks for itself. I (am) not aware of why abruptly that happened the way it did and the reason,” he said.

The host noted that despite the men being high ranking officers, nobody could give a reason behind the decision.

“……It couldn’t be (that they were) unhappy because they bragged about the success, that we did come together as a team and we made it happen after two decades. As I said and (it) only could be the good Lord working because at the same time if we were not disrupted, I would’ve been on pension as we speak and I was preparing myself for retirement.”

“We had a good working relationship from growing up in the Criminal Investigation Department when he was the commander and I supported him in a big way. Never had the opportunity to sit down with him to explain the reason for us….”

Mr Fernander also revealed he never sat down and spoke with the then Prime Minister Dr Hubert Minnis at the time.

The Commissioner also claimed some of his colleagues stopped communicating with him due to an “instruction”.

“When I moved about, some people stopped calling. Some of my own colleagues stopped even communicating and some of them said they got instructions.

“…Say they don’t want to see them ‘(or) want you around Fernander….have a family business and want to see you around, no officers around there’.

“It came from the top because officers came and told me that certain people told them they don’t want them around Fernander.”

Asked if the directive was from the top of the government or the police force, he answered: “Top of the police force. It was clear and it was sad to see that and some of those officers who did it have since left the organisation.

Mr Fernander and Mr Deleveaux filed a lawsuit against the government in 2019 after they were asked to take their accumulated vacation leave that year.

But the Commissioner felt “somebody should speak up”.

“We did and you can see the end result of it. No contest after viewing the AG office and everybody backed out. Everybody just backed and said no contest and I don’t think it should just be left like that. Somebody should speak up.”

The officers returned to the force shortly after the September 16 general election. At the time then Commissioner Paul Rolle said he was “extremely pleased” to have the assistant commissioners rejoin the RBPF’s senior executive leadership team.

Mr Fernander recounted a call he received that he was needed.

“The commissioner called me one morning and he indicated to me that he needed me back. He said there was no experience on the top floor. Crime was out of hand and he had spoken to the prime minister for myself along with the two other officers Ken Strachan and Deleveaux to come back,” the commissioner recalled.

According to Mr Fernander, there was no conversation about him being commissioner at that time.

In the weeks before his retirement and while on the RBPF’s show “Cop Talk Live”, Mr Rolle said it was imperative not to allow political polarisation to interfere in the organisation.

“Take politics out of it,” he said. “Avoid this polarisation. And I say to Fernander, watch out for polarisation.”

Mr Fernander made it clear he would not have a repeat of the same ordeal that happened to him.

“It did affect the force in a big way because even then I still had a good core of officers who would’ve checked on me and had their concerns about what had happened.

officers had been advised to stay away from him.

LOL. That a bahamian thang.

I was at the receiving end of a similar instruction at one point. While being victimized.

The reason HR says that is because they want to reserve the right to do the same to those leftover.

If the colleagues had spoken to me, I wouldhave told them: Watch out, you are next. But they took it to heart and would not even say good day.

Yep, they were next.

Why is the Cabinet in control of the civil service retirement. Police commissioners should be elected like in the UK.

So if he would have been retired now, why did he take the COP position? He is nothing more than a larkey now. He has been paid hansomely

The same amount of time went by and he was getting the same pay. So why did he not retire?

And why be running around talking about it? A real leader would talk about the issues of trying to clean up crime rather than crying over stale, spilled milk.

This will be his claim to fame for the rest of his life. It will not be the reduction of crime in our society because that takes the kind of competence he will never have.