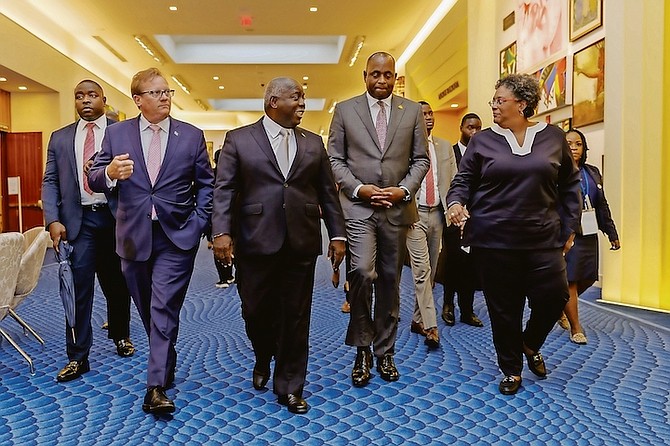 The two-day summit was hosted by The Bahamas in preparation for COP27, which will be held in Egypt later this year.

More than a dozen heads of state were in the country for the climate change conference and key issues being discussed at the event included access to climate funding, disaster mitigation, and strengthening resilience and recovery among other topics.

During the closing session of the conference, Prime Minister Davis said in less than three months the Caribbean Regional Heads of Government will attend COP-27 in an effort to advance climate action.

He outlined the next steps for COP-27 and potential considerations for the region.

He said a draft summary consisting of three to four pages which will outline the proceedings of the conference is currently being prepared in collaboration with the UNFCCC Secretary.

“This regional meeting is critical,” Mr Davis said. “Our shared characteristics go beyond our physical geography. We need to find effective, efficient ways to adapt to new realities.

“We have to restructure our lives and our living environment to mitigate against the disasters which are becoming more frequent and more severe. Easy to say - much harder to pay for.

“The Caribbean has been identified as the region with the largest number of indebted countries. While there are multiple reasons for this, in many cases a major contributor to debt is borrowing associated with recovery efforts from the impact of climate change.

“Here in The Bahamas, we undertook an exercise which revealed that more than 50 percent of our outstanding debt can be linked to the impacts of the hurricanes which descended on us between 2015 and 2019.

Our countries are struggling with debts accumulated by climate disasters.”

Mr Davis expressed his wish to make this an annual event that will be hosted by the various countries within the region.

“We also wish to have awareness amongst our region, to have a similar regional meeting to be done every year and incorporated into the UNFCCC Calendar. So, each year we would hope to have such regional meetings in the various countries around our region to be able to ensure that each year our voices could be heard and because it needs to be heard, it needs to be louder now more than ever,” said Mr Davis in his closing remarks.

“I have also been in touch with the COP-27 presidency to discuss making a space for us as a region, to highlight and advance further actions and ideas that came out of this meeting at COP-27. I look forward to your collaboration in this matter, I think we need our specific space at COP-27 and consideration is being given to that”

Our corrupt and most incompetent Davis is so desperately hoping some of Mia Mottley's leadership shine rubs off on him. Can't help but wonder what she must think of him. LOL

Yep. now for the plane load of vacationers can plan on a trip to Egypt now

Too many of these conferences aren't really planned to accomplish anything. They're simply tourism boosters. For private enterprises, like the crypto conference, it's nothing to do with innovation, it's all about 5000 per head, big money opportunities

PM Davis is along with other wise Caribbean leaders know that climate change is an agenda and the Earth has her cycles like every other woman. The G7 rich power houses have set a profit agenda toward the globe relying on the emotional whims of Mrs Earth. Sometimes she she here then cold here. Drought then raging torrents. Already Finland's mutilation billion windmills would not move as the woman stopped blowing wind. Back to coal and wood. Most G7 that advocated do away with fossil fuels are begging for it on their knees. The German leader was rejected in Kuwait.only G7 manufacture the windmills at 200x the cost of fossil fuels.