INSIGHT: Are we really ready to go back to school? 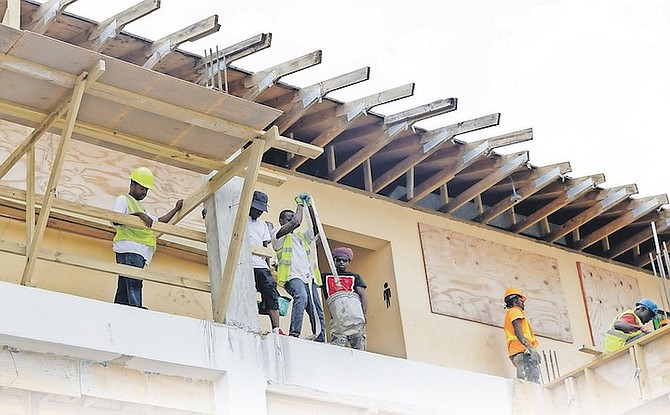 CONSTRUCTION work earlier this summer as schools got ready for the return of students for the new term.

IT’S that time of year when parents will be setting off on the school run again. Children will be wakened early, freshly bought uniforms will be put on, and out the door to school they go, with shoes that might stay unscuffed for a week and bags that parents hope will last.

As much as parents will have done everything they can to get their children ready for school, however, there is only so much they can do – there are things they can’t control once they have provided their children with all they are able.

Whether your child is going to a public school or a private school, there are things they depend on that are provided by the school itself – or the government.

Witness, for example, the imminent frustration on Village Road, where roadworks due to be completed in September will now rumble on into November. That will have a knock-on effect not just for Queen’s College students but for a host of schools around that area whose students will have to make their way through the long tailbacks likely to be caused by construction.

What’s the cause of the delay? Well, that wasn’t exactly clear on Friday when Minister of Works and Utilities Alfred Sears talked about the need for additional work to be done.

He said: “There are some additional works which are being scoped related to installing a roundabout in the front of Queen’s College and Bahamas National Trust. We will be meeting with both of those stakeholders to discuss further what is intended in order to make this roadway more efficient and also improve the quality of life.”

We suspect there won’t be much quality of life for people sitting in traffic on the first day of school.

So the explanation there is additional works – but no mention of when the decision was made to conduct those works, how much they will cost, why extra works are needed beyond the original plans and so on. Shouldn’t all of that have been decided before the first digger moved in? Rather than being announced the week before schoolchildren start to return?

For those who pass the area regularly, it will have been noticed that there are lengthy spells in the day when not a lot of work has been seen to be done lately – so have things ground to a halt while they figure out what to do?

It doesn’t give a lot of confidence when it comes to other areas – Mr Sears has previously insisted that work will be done on time to repair other schools across the country. On August 18, it was reported that he said there were a great number of structural defects that needed to be addressed but he said after criticism from FNM chairman Dr Duane Sands: “He didn’t say it’s impossible. It’s almost impossible and it will be done. You know, that’s the commitment we have made and we’re doing it with the partnership of contractors.”

In the coming week, we will know which of those two was right, and which was wrong.

Mr Sands did however add a qualification, saying: “Some of the projects will have to be cut back, because there’s just not sufficient time.”

Quite what those projects are and how vital they are, he did not say. You can’t, for example, simply decide not to repair a roof then declare the project complete as the rain falls on children’s heads.

Credit however goes to the government for resolving another area of contention – the long-running dispute with teachers. Teachers decided to go back to the classroom rather than taking industrial action. Have we reached the end of that saga? Perhaps not entirely – returning to the classroom always seems to have its share of tensions with things that aren’t quite right or working environments where construction isn’t quite finished. But parents can seemingly be more confident that their children’s school hours won’t be interrupted by a teacher walkout than they could have been six months ago.

Which brings us to the last part of the bargain struck between parents and schools – what we can expect our children to achieve.

Because once we have the roads fixed to get to school, the classrooms fixed for our children to study at school and the teachers in agreement over their contract to teach – how well are our children learning?

The latest exam results to come out last week were not encouraging. About 13 percent of candidates received a C or higher in at least five subjects in the latest BGCSE examinations. That’s less than one in eight.

Even when being fair in pointing out that we have come through a challenging time with children using virtual learning platforms, that’s not an encouraging number.

The total number of candidates dropped – again, perhaps that’s not surprising given the talk of how many children have not engaged with remote learning – and while there are some minor positive shifts here and there, overall it is not a pretty picture for our children.

What is more concerning still is there doesn’t seem a burning drive to put education at the forefront of elevating our nation. We should be moving heaven and earth to give our children the best education – instead, we can barely move enough earth to get roadworks completed on time.

Going back to school this week, parents will be hoping the best for their children – but beyond hope, we need to take practical steps as a nation to give those children the education they deserve, the education they need, and the education that will ultimately take us forward as a country. It’s not just about fixing roofs and keeping the lights on.

Dr sands can not drag Mr Sears old shoes , Mr sears has a heart for the people , unlike the Sands who want power at any cost he got In trouble because while they were putting black folks in jail for going to the pump He SANDS WAS opening air ports for rich folks