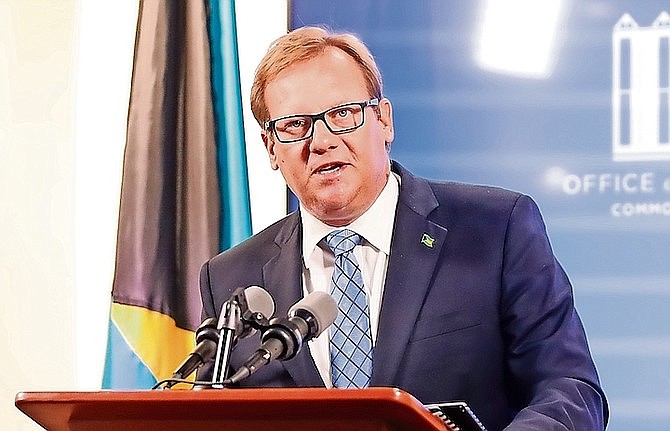 DESPITE promises from the Davis administration to present the marijuana legalisation to Parliament before the end of the year, Attorney General Ryan Pinder said yesterday that this is “not likely”.

Mr Pinder said the government is still working on the proposed legislation, however, he was unable to give a definite timeline.

“It is coming along well. Just some technical aspects we have to work through,” he told The Tribune yesterday.

In July, Prime Minister Philip “Brave” Davis said by the end of the year Bahamians will know the direction his administration intends to take when it comes to cannabis legalisation.

“The issue of marijuana and the legalisation of marijuana, what aspect of it is going to be legalised, is under active consideration by my administration,” Mr Davis said.

“One would have noted in our Blueprint for Change that we did acknowledge that medicinal use of marijuana is acceptable to us. It’s a question of whether we’re going to move as far as recreational marijuana, but we’re in the process and you would’ve heard the Attorney General indicate that he will be coming to Cabinet very shortly with legislation for Cabinet to have a view on where we go from there.

“But by the end of this year you’ll know exactly where we’re heading and so far as investors are concerned that’s our mantra of the Progressive Liberal Party is Bahamians first and I expect Bahamians to be involved in that business,” Mr Davis said at the time.

In June, Mr Pinder said the Davis administration intended to advance comprehensive legislation to regulate a medical cannabis industry and a separate framework for industrial hemp. At the time, he said this would be done in the first six months of the fiscal year, meaning by the end of 2022.

Rastafarian priest Rithmond McKinney told this newspaper yesterday that he was still awaiting word from the government on the issue, however he was optimistic that the legislation will be presented this month.

He said he will “humbly” wait to see what transpires in the weeks to come.

Mr McKinney, of the local Rastafarian Bobo Shanti tribe, had previously told this newspaper that despite the pace of the process, he is thankful that things are moving in the right direction regarding marijuana reform.

“It’s a positive step in the right direction concerning marijuana. But (at) the same time they can’t forget about fundamental constitutional rights as Rastafarians,” he had said.

Yet another example of government ignorance and incompetence. Passing crypto laws only took a few weeks despite no one in government understanding the implications. Cannabis legalization has been on the table for years without success, despite the EU and the US already having passed such laws. If stupidity hurt, government would be rolling on the floor and crying 24/7.

Can't disagree with one word you have written. To save on the cost of police chasing weed and to enhance tourism, the Bahamas needs to legalise ganja. New opportunities for farmers and shop owners.

Government just do not want input from local persons who know where the strengths and weaknesses are regarding the medical, relgious science, business, legal and recreational regulation of cannabis which is used by some 20% of the population and within reach of 109% of the population anyway. That the pastors must learn aspects of all addictions is the problem along with the political filters that determines who ruse, stays stagnant or walks. The National Interest never takes president by itself but must be filtered or rejected and there is no space for neutral truth.

With marijuana/cannabis regulation murderous gangs will loose their sole billion dollar funding. The drug war has succeeded in getting a small few rich, hundreds murdered and left thousands of persons under 21 years of age exposed to harm because Marijuana is a part of our environment. The contradictions of Marijuana decriminalization, legalization and taxation is not real but excludes support of Pasters who also refuse to learn how to address all current addictions of gambling/cocaine or the social factors of alcohol/Marijuana use. Marijuana will only become a moral issue if endorsed by the state even though at present 100% of our population is exposed unregulated and the USA War On Drugs has failed and destroyed millions lives through criminalizationthen then incarceration of use with small possessions. On this point the Church says families should be saved and spared as a murder live should be saved and forgiven. Then they also agree that violent gangs alone should spread terror because gangs alone should be lest to make billions from local use. But if government through regularization will stop the murders conflicts arise. The first benefit of Marijuana/cannabis State Regularization would be a welcoming 60% lives saved and more energy for the Police to address other issues, and work less at murder investigations. Government needs all on board as State Regulation will o pen up avenues to address issues at the clinics for pregnant mothers who smoke, those under 21 years of age, matured persons and those for health benefits. We need all on board as prohibition has failed across the USA and the America's. God is the answer for all forms of addictions especially sweets and sugars that maim and destroy so many lives. If you don't smoke don't start but persons must understand the cons or they might just try it in the wrong form or percentage of THC. Canada offers Cannabis Certification through CAMH for Primary Care, Social, Education and Health Workers. The course covers from prenatal to palliative care and is a must for The National Interest. cannabahamas@gmail.com. Something has to work.

The Bahamas's Attorney General Ryan Pinder strikes out again without warning much annoyance to the office of the premiership (OOP), — Yes?

Marijuana laws are stupid. It would be like banning alcohol, oh that's right ...that was tried and failed miserably as well. Legalize it! Reduces crime and strife.

The numbers boyz must be a little upset over this. They are ready to go.

The comrade delights in keeping his radio station's legal department and URCA regulatory standards and boundaries people on them toes, — Yes?

I don't ever want to use it personally and to be frank, I believe it negatively effects some habitual users.

I just think it's absolutely ridiculous that we waste police, judicial time, public funds and ultimately take away the freedom or impose fines on some of the most underprivileged in our society.

I also feel it's bad to make a fiasco out of criminalizing the 1 unlucky tourist out of the thousands that probably partake, it's an embarrassment to our country!

It's also a crying shame that those that need or even feel they need it for medical purposes are denied it or risk imprisonment and shame if caught.

I feel these reasons alone should be enough to decriminalize it but to go even further and legalize/regulate/promote it may actually benefit us as a country for once, it may also stop our young men from killing each other over it.

Well, yes, I tuned-in long enough to learn from "Comrade Mr. Carmichael" that the Bahamas should "grow" its own chickens, — Yes?

Yes lets continue to keep the street gangs well funded and keep the oh so lucrative income all 100% VAT and Duty free commerce going to the select few willing to take that big risk in the black market. They don't even have to pay that crazy high customs broker fee to import the stuff.

The real reason for the delay is I bet due to 2 things. firstly trying to figure out what to do with the thousands of people rotting away in Fox Hill on marijuana charges, and secondly how to set it up so that only 2 or 3 lucky people get to control the entire market through legislation? (Like how only 5 gambling licenses were issued and everyone else can suck teet. or how couple lucky people get all the toilet paper govt contracts at great benefit)

The gambling operation because it answers to zero regulation is a national criminal enterprise that profits only the Golden few. Regulation or a gambling council that would advocate adequate warnings for the warning signs of addiction with destruction of personal finances, family, society and community was placed on the sewer. Government made 2.5 million in gaming taxes then spent 19 million on feeding the afflicted poor. Should the greedy gambling boys get their hands on business operation using the gaming framework free for a few while all others suffer weed stores will be near schools, churches in dense neighborhoods and with no warnings. Just pay out the law makers and expect anything.

@Comrade, do explain how as defined by order governor-general, licensed Numbers Houses are suddenly businesses of organized crime — Yes?

Tal Russell well maybe bahamians should've voted yes when we had the referendum on gambling back in 2013. Who knows maybe our politicians would've outlawed the webshops.