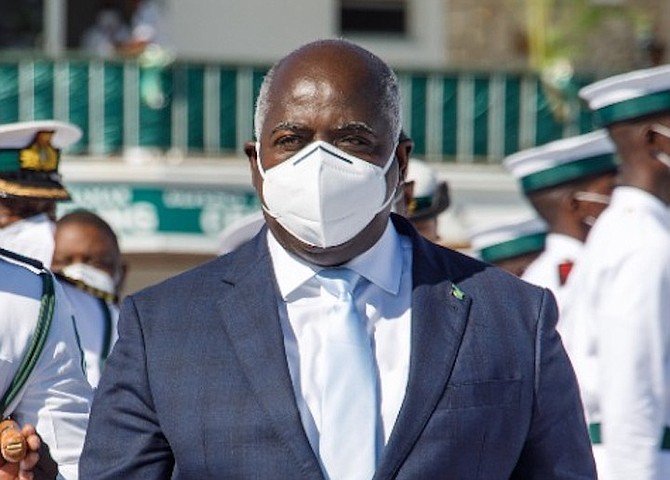 PRIME Minister Philip “Brave” Davis said he doesn’t view the change in protocol for press seeking Cabinet interviews as the media being shut out, rather it was an attempt to add structure and avoid a “gotcha moment”.

Last Tuesday, the press was denied direct access to Cabinet ministers as they arrived for the weekly Cabinet meeting at the Office of the Prime Minister. Press secretary Clint Watson said the move was in direct response to the logistical and security issues created by reporters and cameras gathering in an attempt to speak with senior government officials. Moving forward, Mr Watson said the media would be facilitated in the press room at OPM.

Asked about it on the sidelines of a passing out ceremony at the Royal Bahamas Defence Force base at Coral Harbour on Friday, Mr Davis was quoted by ZNS as saying: “I don’t know that it was a shutout per se.”

“Unfortunately, that was a security issue I think more than anything else and I’ve asked them to address it.

“You know it’s always very difficult to be focusing on going to a meeting, of a Cabinet meeting where weighty matters are being discussed to be interrupted on the way to answer questions that sometimes you don’t even know the answer to and we’re just trying to bring some structure so that whenever you speak to us that there will be an informed discussion as opposed to what I call a gotcha moment.”

“I know that the press would like to talk to us every day. It’s always questions out there to be answered, but Cabinet ministers, public officials have to get on with their work and what we did is we carved out a time every week to allow the press the opportunity to speak to any issue that they may have on their mind.

“Do they want more than that? If they do, I don’t think we’re being less accountable because whenever you think you have a question a Cabinet minister must stop and answer it. There has to be a give and take.

“I would think you would want to talk to a Cabinet minister when he has the time. You’ll get a better and more informed answer,” Mr Davis said.

Mr Watson said last week officials had to think about all parties and their confidentiality affected by media presence outside the OPM.

“…But I think the bigger picture must always be that we have to always think about everyone impacted and in this building that means thinking about those who visit - the customers that come here, the Bahamians that come to visit, the investors that come for meetings to ensure that their privacy is protected from media and a whole street of cameras outside on a Tuesday, which will now become a regular and a norm,” Mr Watson said.

Mr Watson continued: “So, we’re seeking to ensure that everyone at the end of the day is satisfied with the arrangement and hopefully we’ll have the support of my colleagues in ensuring that this happens.

“We’re going to try and work it. If it doesn’t work, we’ll tweak it and find a way for it to work. I believe Cabinet ministers will cooperate if that is a concern. Will they come to the media room? I believe they will. The Cabinet ministers have not run away from media. They’ve not.

“If they can provide you with information they always seek to do so and our press team stands ready and able to ensure that those persons that are needed for interviews are brought here before they go to the Cabinet room.

“We stand committed to that and our Cabinet ministers stand committed to assisting us in that regard and so we ask for you, the media, to come on board and work with us as well to ensure that this is a smooth transition and believe at the end of the day it’ll be a more comfortable one for all of you as well and I think a more dignified approach to ensuring that you can get stories that you need on a regular basis.”

Tourism, Investments and Aviation Minister Chester Cooper was the only minister who walked over to reporters and agreed to be interviewed.

In the past, media would usually wait directly outside buildings where ministers were expected to meet to get interviews without facing such restrictions.

Mr Watson later said the measures outside OPM were not unusual and only a part of the RBDF’s security protocols.

It's a wrestling match just five months into office after The Bahamian people voted out our dangerous FNM government the press is seeking a takedown. The press were not allowed to question Minnis Covid policy the only balance was created by talk show hosts. Thank God for them. Hysteria was created by the press against our PLP government as the organism tried to foment a Crises of historical proportions over the leader's honestly backed by science was a health threat nonstarter. We just do not know what the press will gaslight next with tidalwave sensation. It is best to be safe than willfully sorry. The public always appreciates and is supportive of good credible snips.

People who do their jobs are never afraid of questions or "gotcha' moments.

Just be sure to always speak TRUTH;

"Our poor Cabinet Ministers, having cabinet meeting is so hard for them, and if they are asked a question while they are arriving at the building then they simply cannot recover focus"

Is this their legitimate excuse, that our cabinet ministers, that run our country need to be treated like children because we are worried about their attention span? Questions overwhelm our leaders? What a load of BS.

Davis might be right about the need for added security given that there may be organized crime syndicates (ruthless mobsters in New York City and Miami) looking to get back or get revenge for the millions of dollars worth of jewelry they had consigned to Bahamas Treasures, much of which is rumoured to have vanished.