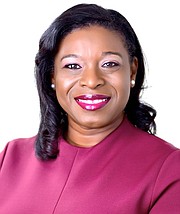 • Violence, threats towards borrowers will be prohibited

A crackdown that aims to reverse “non-existent” consumer protection from unregulated money lenders will take effect in the 2022 second quarter, the Securities Commission’s top executive says.

Christina Rolle yesterday told Tribune Business that The Bahamas is “going from zero” when it comes to filling what has been “a very big gap” in safeguarding its citizens from predatory lending practices by persons and entities operating outside the established financial services supervisory environment.

She spoke out after the regulator, which oversees the capital markets, financial and corporate services provider, and investment fund sectors, released the draft Money Lenders rules for a third round of industry consultation amid hopes it will prevent Bahamians from falling prey to practices such as sky-high interest rates that exceed the lawfully-allowed 20 percent maximum.

The rules, which will capture all money lenders and require them to operate as companies or other legal entities, rather than as individuals, also prohibit such persons/firms from using physical violence, threats or other forms of intimidation against a borrower or their family members when collecting loan repayments and debts.

No penalties for such ‘loan shark’ type tactics are contained in the rules, which make clear that both guilt and punishment is to be determined by the Supreme Court, but they do impose far more stringent transparency requirements on non-bank lenders not covered by the Financial and Corporate Services Providers or any other financial services-related Act.

“What these rules do is that they set out the standard by which people in the business are to operate,” Ms Rolle told Tribune Business. “It sets out the rules by which they are to conduct their business practices. The main purpose of the rules, if I were to point to one, is consumer protection.

“I think this goes a long way in closing some of these gaps. Obviously once the rules are in use, and consumers begin to become familiar with them and their rights under the rules, we will see whether there are adjustments to be made but this is a good place to start.”

No data exists on how large the non-bank, non-traditional lending market in The Bahamas is, although Ms Rolle said anecdotal evidence suggested it is significant and has played an increasingly important role in providing residents with access to credit ever since the 2008-2009 recession. And that may have further expanded due to COVID-19’s devastating impact.

“I think they’re extremely important,” Ms Rolle said of the proposed money lender rules, “especially when you consider that non-bank money lending has been on the rise since 2008, and more and more consumer loans are in the non-bank, non-traditional space as opposed to traditional banks.

“We don’t at the moment have any idea in terms of market size. Some of the things these rules put in place is our ability to require reporting on these matters. So once these rules are in place, we’ll be able to get reporting and make reports on the size and other statistics with respect to the industry in the future.”

Ms Rolle added that the latest industry consultation on the Money Lenders rules is the thirds, with the feedback period due to end on March 15, 2022. An industry briefing featuring the rules will be held on February 24, and the Securities Commission is also planning to give the wider public “an opportunity to engage directly with us on any concerns they have”.

The regulator will spend two weeks post-March 15 reviewing the feedback and making adjustments and, once satisfied, will send the final version to the Prime Minister, in his capacity as minister of finance, for a ‘no objection’ sign off. Once that is received, the rules will be implemented, and Ms Rolle hopes to accomplish this by the “early 2022 second quarter”.’

She disclosed that the Money Lenders rules have been in development since 2016, when the then-Christie administration had hoped to introduce them as part of a package alongside the Homeowners Protection Bill (now Act).

However, Ms Rolle said the reluctance of many Bahamians to file formal complaints about such practices had largely stymied the Securities Commission’s ability to conduct investigations. “The truth is that in financial services it’s very difficult to get Bahamians to make formal complaints,” she told Tribune Business.

The Securities Commission executive director said the rules are targeted at those “in the business of money lending” and providing “third party loans on a consistent basis”. They are not meant to capture, though, persons lending money to other family members.