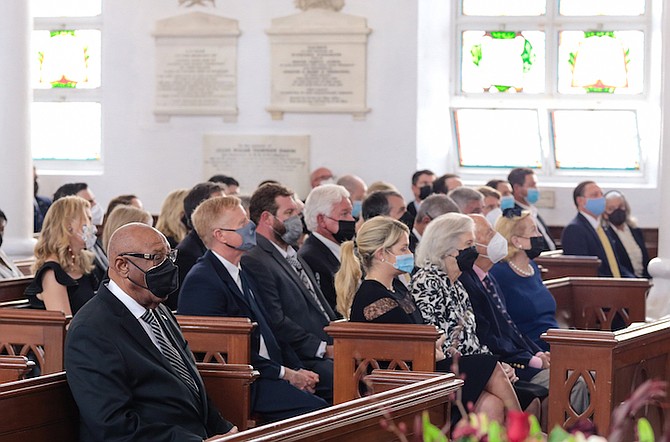 Governor General Cornelius A. Smith pays his respects to the family of Sir Godfrey Kelly.

As one of the delegates sent to London in 1963 for The Bahamas’ Constitutional talks Sir Godfrey was one of the key architects to guide The Bahamas to nationhood.

Over the span of his illustrious career Sir Godfrey Kelly was a prudent businessman responsible for the creation of the Mall at Marathon, co-founder of the Cat Island Regatta with the late Sir Harold Christie, and a decorated lawyer of 66 years serving at Higgs & Kelly until his retirement in 2019.

During the service Father William J Martin, rector of St Michael & All Angels Anglican Church in North Carolina, spoke fondly of his friend reflecting on his life of dedicated service to the country he loved. 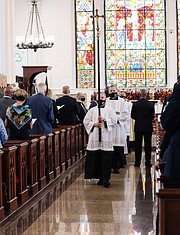 He said: “Sir Godfrey Kelly was a remarkable gentleman. Godfrey was a graduate of the University of Cambridge and the Middle Temple in London as you have heard. Olympian, lawyer for 66 years, rep for Cat Island, Minister of Education, Senator, keen shooter, sailor, and founder of the Cat Island Regatta. Sir Godfrey as you have heard also was made a Knight Commander of the most distinguished order of Saint Michael and Saint George by Her Majesty the Queen in the 2020 New Year’s Honours List. Sir Godfrey loved his Bahama land and did much to support the education and welfare of it.”

Father Martin also extended his condolences to the Kelly family and spoke of the deep love Sir Godfrey had for them.

“Godfrey loved the Kelly clan, he loved Sonia his wife of 65 years deeply and depended on her for absolutely everything. Sonia, we love you for your perfect faithfulness, love, and care of Godfrey. You are a model to all of us of sacrifice and devotion.” 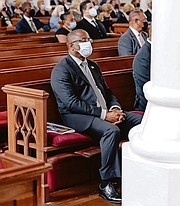 “Katherine (Sir Godfrey’s granddaughter) was the apple of his eye, you were the pride of his life, you were the recipient of his incessant love and happiness. Godfrey was filled with joy over all you do, did and will do in the future as you carry on the Kelly legacy. Katherine, we love you, we are praying for you and know that you will make Godfrey very proud,” Father Martin said.

Katherine Anna Elza, Sir Godfrey’s granddaughter, delivered the eulogy as she was asked to do by her grandfather.

She remembered him lovingly as a caring dedicated man with a keen wit.

“Although he did nothing for reward or recognition it is no surprise to me that on many occasions he was recognised for his dedication to the progression of the Commonwealth of The Bahamas. In 1999 Sir Godfrey was made a Companion of the Order of St Michael and St George for his contributions to the growth and development of The Bahamas. We attended Buckingham Palace in November of that year for the investiture and in true Godfrey humour sparing no one, not even the Queen, when asked by her Majesty what he did to deserve this honour he sharply responded in his charming way: “Well you should know, you gave it to me.” It is this fire and wit we will all dearly miss.”

In her final goodbye to her grandfather Ms Elza remarked that with Sir Godfrey’s passing the country had lost a true patriot and one of the last surviving founding fathers.

“As tributes to my grandfather over the last week reminds us that his death marks the end of an era for The Bahamas. At his passing he was the most senior former Cabinet Minister and the most senior Parliamentarian in our country. He was also the most senior member of The Bahamas Bar. He is the last of a profound group who shaped the development of this island nation. He believed that hard work paid off and that personal success means nothing if not shared by one’s countrymen,” she said.

Sir Godfrey was a very fine gentleman. He led a life of dedicated service to our Bahamas and to his fellow citizens. His contributions in so many endeavours have long been appreciated. He will truly be missed. It was fitting that The Governor-General, on behalf of our Queen, attended the service to pay tribute to this most remarkable man.

And he was extremely charitable, giving support to charity's all across the nation, people have no idea the extent of his generosity and the legacy of generosity the Kelly clan continue. He was an icon. The nation needs more people like him. RIP Sir Godfrey, you deserve to have rest & peace, you certainly earned it.