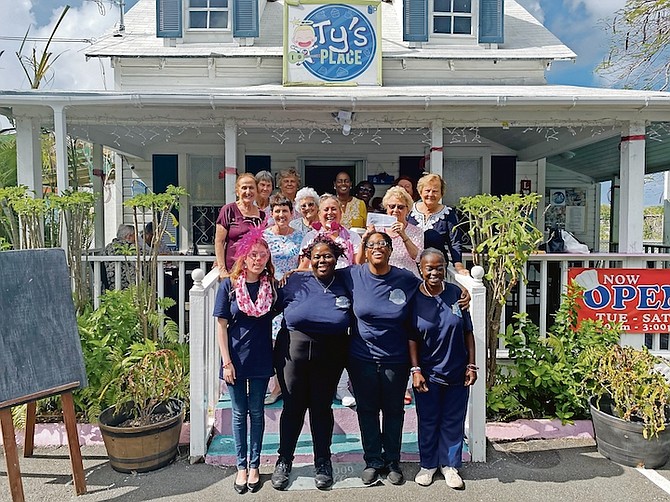 THE TEAM from Ty’s Place.

DOWN a narrow no-name road off Village Road at the end of the pavement lies a 120-year-old Bahamian cottage. The sign above the veranda says Ty’s Place. If you’ve ever been there, you will never forget the day and the experience. If you’ve never been there, tomorrow is not too soon.

You see, Ty’s Place is a restaurant that is more than a restaurant. It is an example of what can go right when you believe in something. The something founder Cheryl Johnson Newell believed in was the ability of people with a disability. Most of the staff has one sort of challenge or another or even multiple challenges ranging from autism to mild Down’s syndrome. On their own, they may have faced a public that did not understand or care. Together, they are like a family and every meal they prepare and serve is dished out with love and hope and heart. All that aside, the food is delicious. From the basics like beef or portabella mushroom burgers and cracked chicken to the veggies and cranberry chicken salad to specials that change daily like a creamy conch chowder or spicy penne pasta with shrimp or chicken, from lobster salad to lasagna or meat loaf and mashed potatoes, from their famous homemade mango-drizzle salad dressing to freshly squeezed limeade, there’s variety, plate appeal and just plain good flavour to savour. 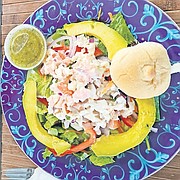 One of the meals served at the venue.

Newell founded Ty’s place four years ago. It is named after Ty Bethel, the son of Mizpah and landscape guru Tim Bethel. Ty was born with Down’s syndrome and at the age of five was diagnosed with leukaemia. You may remember the signs that were posted around Nassau as so many, touched by his story and his courage, showed support, raising funds for the young family facing huge medical bills. There was a walk that attracted hundreds. Ty lost his battle with cancer when he was 10. Newell, who has a son with Down’s syndrome, and her family had been friendly with the Bethel family going back generations. A singer and entertainer for 30 years, performing at Atlantis and elsewhere and with greats like the late Ronnie Butler, something in her changed when Ty died. She traded the microphone for an apron and a business that she did not know would make it or not, but she wanted to give adults with challenges a way to make a living, to find dignity and self-worth and her smile tells all.

Newell knows most of her customers by name and greets them as if they were family. You cannot help but feel at home on the veranda which they have had to expand, thanks to the popularity of Ty’s Place. Only Newell and the cook lack a disability. But others like Jeanie Kemp and Katie Donald are proud of who they are and what they do. Jeanie, for instance, like a few others, not only serves on the premises, she hops in a car, delivers orders and zips right back to the cottage at the end of the pavement to take her place again as server-in-chief in the midst of a busy lunch hour. The take-out business like Saturday boiled fish and chicken souse has been so strong that Newell is taking the next step in an expanding dream.

After four years of lunch only, Ty’s Place will begin serving breakfast March 1 and will be open six days a week, closed only on Sunday. Cheryl Johnson Newell, a woman with heart, who saw in others what they could do when so many chose only to see what they could not, has created a restaurant with a cause and a cause for celebration.

WHEN WILL BANKS RESUME HOURS?

REMEMBER the days when you could go for a boiled fish on Saturday morning and then head to the bank? Or the afternoons when you could do a school pick up and stop at the bank on the way back to work?

Now going to the bank between the hours of 9 or 9:30 and 1pm is like having to schedule a vacation day. Or trying to call all the numbers for another bank only to be answered by a robot saying not available. Or waiting in line outside a bank with no shade or shelter even though the bank management knows there will be lines on Fridays because it is not like Friday is a freak. It happens every week like clockwork.

Did anyone remind their bankers that the worst of COVID appears to be behind us and we are now entering the era known as endemic rather than pandemic, meaning we learn to live with it and we expect more of our banks than we did when COVID made us more sympathetic to those struggling with staff shortages because of illness?

Commercial or retail banks are going to face a lot of competition in the coming few years and for those that hope to survive in some semblance of brick and mortar fashion, it is time to wake up and smell the fury.

Customer service has shrunk to what feels like a new low. The other day I had an email that was so rude in tone that the department manager who was copied was so mortified she picked up the phone to call me to apologise for the tone her colleague had used.

The humorous part - the rude email saying there was nothing they could do or planned to do to expedite the delivery of a replacement credit card that was cancelled due to a fraud attempt was signed by someone whose title was customer care representative.

While we were appreciative the fraud attempt was caught by the bank immediately, the initial communication advised a new card would be issued within 7-10 days so when nearly two weeks went by and we asked about the card, we never expected a reply from customer care saying too bad. The exact words were “we are unable to request a rush card at this time.” I reminded her that two weeks is not a rush. There are now 14 emails in my inbox related to this one item. That does not include sent e-mails. This would not happen with American Express so complain about it all you want, but when there has been a fraud attempt on my AmEx, I get a new card couriered the following day. That is customer service.

What I am getting now from a particular bank is a signal that they do not care about our business or our convenience or our needs in the slightest. Next thing you know, they will want me to pay a fee for banking with them. Oh, yeah, I think I already do that. Truly, it is time for banks to re-examine how they treat Bahamians and take a good look around at the options for keeping your money in a place that pays no interest and now no attention.

People complain about the public service, especially now with the horrendous backlog of business licences. But if ever there was room for improvement, it should start with retail banks because right now the public service is looking pretty good compared with banks advertising that they are serving Bahamians.