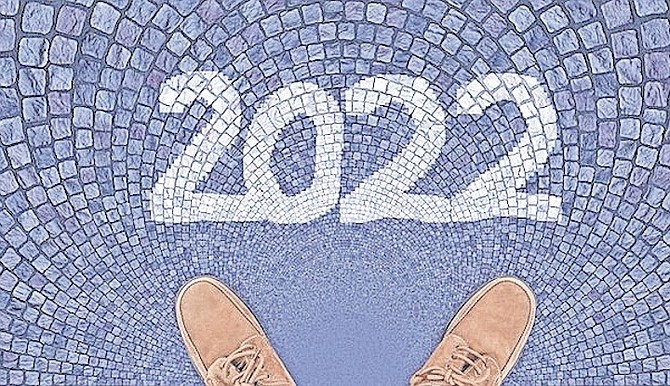 HERE we are, in a new calendar year. We always look forward to the fresh start a new year represents, but especially after going through a difficult one.

The past two years have been particularly challenging, forcing us to change the way we do even the most ordinary things. These changes have, generally speaking, not been fun, nor have they brought instant gratification, but many of them have helped to keep us and those around us alive and relatively healthy.

For some, 2020 and 2021 made the realities of other people much clearer, exposing both individual struggles and the issues within systems that were assumed to have been working all along. As we prepare for this year, with resolutions and commitments that can help to turn our hopes and dreams into achievable goals, let’s think about the ways we need to change as a people, including our thinking, speech and actions.

I am sharing four principles that we, as individuals, can consider and put into practice this year. The same principles apply within groups and organizations, including governments, but it is useful to start at the individual level.

As the population has grown and the cost of living has gone up, we have been more individualistic. Most of us are not as well-acquainted with our neighbours as we – or our parents and grandparents – used to be. Some of us do not even know their names.

For various reasons, including busy schedules and the walls and gates we have put up around our properties, we do not have the same amount of time or even the inclination to connect. We create relationships with people in our orbits at work, church, school, and other institutions, but many of them at a surface level. There is small talk almost all the time with people we see on a regular basis, but the depth of these relationships vary. This is fine, but it is important that we are able and willing to show up for each other in times of need. Alert neighbours of suspicious activity, take care of grocery shopping for an ill co-worker, interrupt an uncomfortable interaction to create a safer environment for a vulnerable person.

There are many ways, as an individual, to step up. We do not need to wait for something to go terribly wrong before we intervene.

The more we get to know each other and pay attention – which is not the same as being nosey – the better we will be at taking care of each other.

It is particularly important that people in positions of power remember that people are more important than money or any other metrics. Laws, policies, regulations, programmes, services and products need to serve people.

They need to meet our needs. Those who craft them are responsible for ensuring their development, execution and promotion do not leave us worse off than we were before. Positions of power are not only held in government. They exist, for example, in places of work and in the home.

When a staff lunch is being planned, a people-first approach would involve a complete list of dietary restrictions and allergies. The organizer would not simply choose the least expensive vendor and expect those with dietary restrictions and allergies to eat around the things they do not have or fill up on other options. They would ensure that there is no mixing of particular food items and dishes and try to have appetizing, nutritious options for everyone.

In the home, a people-first approach could include the involvement of children in making the grocery list, meal planning and budgeting. This means they can participate in decision-making processes, able to make their own choices within the limits of budget and time which can be explained to them. People-first means people are prioritized, seen as whole human beings and the overall wellness is considered. It means people’s needs are assessed and outcomes meet their needs without exacerbating existing issues.

We have to be intentional about valuing each other and we need to remind ourselves and each other that money is not more important than our wellbeing. We also need to be mindful that our wellness is not limited to physical health. It is important to have love, peace, and joy too.

We have a tendency to use violent language, even when we do not intend to cause harm. “Jokes” are made about stabbing, “knocking out,” and all kinds of other acts of violence. It may seem fun, funny, innocent or meaningless, but this language and the proliferation of its use helps to normalize violence.

It should not be a usual occurrence to hear talk about someone “gettin’ punch up” or threats (however empty) to “buss” anyone up. Phrases like “beating up” should not be used as a replacement for “sex.” Children should not be threatened with violence.

There are better ways to encourage good behaviour.

There are much better ways to talk about enjoyable activities. There are funnier jokes to be made. This year, let’s try to stop ourselves and each other from using violent language.

Even if the words escape before we realize it, it is helpful to acknowledge it for ourselves and those who hear it and state the commitment to do better. This can lead to others offering support, pointing out when there is slip-up, and maybe even giving tips for getting out of the habit of using violent language.

They say the road to hell is paved with good intentions. We have all heard this saying many times and may have even said it to people who tried to do one thing, but their actions led to a different outcome.

One of the ways we get caught in back-and-forth arguments and have long stand-offs is the refusal to acknowledge that intent does not lead to absolution.

There are consequences for our actions. Many times, those consequences are completely unexpected. It is easy to say, “I didn’t mean to do that.” It may be true when you say, “I meant to…” That, however, does not change the impact of what you did.

It is helpful to consider impact at least as much as we consider intent, before taking action. You may want to make a friend laugh. In most cases, that is not the first thought. The first thought is to do or say something, like make a comment on their appearance.

When that idea comes, it may be followed by the thought that they will laugh at the comment.

Before telling someone they look like a big banana in their all-yellow outfit, it is a good idea to think about the other ways they may receive it.

To them, it may not be funny. It may even be that today is not a good day for that comments because it has been a particularly difficult one. Perhaps the person has already been called a banana twice for the day.

However funny it may be for you, it could be embarrassing for the person on the receiving end. Sometimes a comment can be taken lightly in a particular circumstance, but not in others. For example, if made one-on-one, it could be fun, but made loudly in a room full of people, it could make the person – and other people present uncomfortable.

By thinking through the different ways a comment or action may be read, we can avoid undesirable situations and moderate the impact we have on others.

You may decide you would rather make a friend laugh than risk offending them by commenting on their yellow outfit, and this could prompt you to say something that is actually funny, and not a judgment of their fashion choices.

Why do I want to say or do this? What do I want to achieve? Is this a good way of achieving that goal, or is there a better way? Even doing this double-check, you can still get it wrong sometimes. It is important to acknowledge it, trust and respect that the other person is being honest about their feelings, and recognize that they experienced a particular impact, regardless of your intent. Get comfortable with apologizing, do not shame people for their feelings, and remember that you are responsible for your own behaviour.

Let’s make the most of 2022, and make a point to be good to one another. Know that people are more important than things, and remember to talk and act like it.