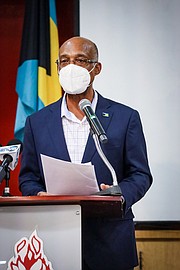 At an FNM press briefing on Wednesday, Mr Lloyd urged the government to reconsider its plan to suspend learning with a hybrid model and in person classes amid soaring COVID-19 cases.

This prompted Ms Hanna Martin to say she has “endeavoured to resist commentary on the lacklustre performance of the former minister.”

In response, the FNM stated: “In a recent video statement, the Hon Glenys Hanna Martin took umbrage at the invitation by the former Education Minister Jeffrey Lloyd, who, in a media briefing Wednesday, encouraged ‘this government, with all compelling urgency, to revisit its decision to require virtual learning for all schools, and undertake the diligent evaluation of individual schools on individual islands and approve all who can prove that they are equipped to abide by the critical health protocols,’ as lacklustre.

“Minister Lloyd wasn’t criticising the Ministry of Education, himself a life-long educator, and one committed to the advancement of the Bahamian society, but, rather, was offering a suggestion that the government reconsider its decision.

“He appreciates and understands the enormous difficulties COVID, and Dorian before that, have imposed on the education of Bahamian children.

“As FNM leader, the Hon Michael Pintard has repeatedly stated the FNM stands ready to partner with the government in addressing the many national challenges this country faces, especially those like education and health that transcend partisan and parochial boundaries. This was the spirit of Mr Lloyd’s recommendation.”

The party addressed the minister’s comments on Mr Lloyd’s performance.

“It’s difficult to believe that she would be unaware of the signature accomplishments of the ministry under his excellent stewardship, particularly in light of the unprecedented COVID-induced disruption in education and the Bahamian society, since, as she stated, she ‘has the facts,’” according to the statement.

Students benefiting from free tuition from BTVI and the University of the Bahamas since 2018, high school graduation increasing from 44 percent in 2017 to 60 percent in 2019, and many other examples were highlighted by the FNM,

“Upon coming to office in 2017, the FNM, through Minister Lloyd, repeatedly stated that ‘education is everyone’s business.’ We, therefore, agree with Minister Hanna Martin that all Bahamians are encouraged to join in the education of our children,” the party said.