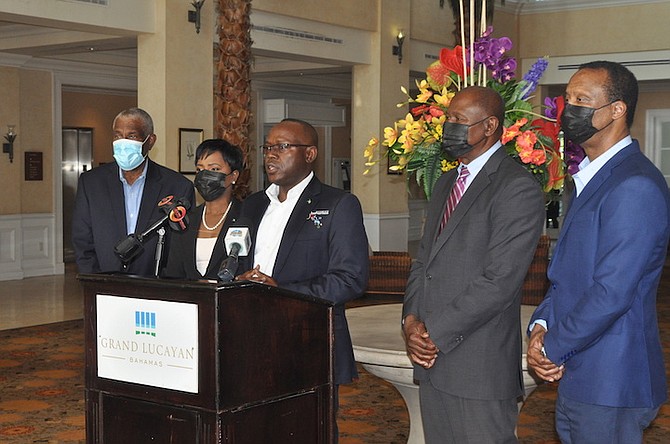 DEPUTY Prime Minister Chester Cooper said the level of interest from investors in the Grand Lucayan property is growing every day and the government is working diligently to achieve a positive outcome for the resort on Grand Bahama and its residents.

“We are confident already with the level of interest we are seeing,” affirmed Mr Cooper during a press conference at the resort yesterday.

So far six investors have expressed interest in the property, and he hopes it will attract Bahamian investors as well.

When asked about the six potential investors, Mr Cooper said: “Of course, I am not at liberty at this point to disclose those suitors for the property. I hope in due course we will be able to share that with you. But over the next, perhaps, six weeks we will be talking with all of them, and any other new potential investor that comes forward at the end of that period we hope to be able to enter in direct negotiations with one of them.

“So that is a process moving forward and hopefully in six weeks, we will be able to say more.”

In December, it was announced that the agreement between the government and Royal Caribbean Cruise Lines/ITM Group for the acquisition of the resort had been cancelled. Mr Cooper, who is also Minister of Tourism, Investments and Aviation, felt the deal negotiated under Minnis administration was “a bad” one.

Speaking about those groups interested in the property, he said yesterday: “At least six of them and this list is expanding every day. People understand the value generally that exists on the waterfront and the opportunities here on Grand Bahama.”

Mr Cooper, along with Minister for Grand Bahama Ginger Moxey, toured the property and met with the newly appointed board for the first board meeting for 2022. Chartered public accountant Julian Russell serves as chairman of the board.

Other professionals making up the board include three attorneys and a veteran executive hotelier in the tourism industry.

“This is an important step in the transition of this asset and hopefully to being a booming part of the tourism product here in Grand Bahama,” he stated.

“We have terminated that deal (with RCL) by mutual agreement, and we are moving forward to find a new partner and a new investor for this property. This is a fantastic asset on the waterfront here and this is an opportunity to strengthen the tourist product in Grand Bahama. “And the goal of this board is to ensure it comes to fruition in the shortest possible time frame.

“So today in our board meeting we will discuss the way forward. We will be talking about how we can cause this development to be reopened in the shortest possible time frame,” Mr Cooper said.

The Minnis administration purchased the hotel for $65 million in August 2018. Despite criticism over the move, the former government maintained it only planned to hold on to the hotel to preserve the island’s economy before selling it to a viable developer.

Mr Cooper indicated that Grand Lucayan has been the cause of great concern for some time to Grand Bahamians.

“And we know the residents are looking forward to having jobs as well as business opportunities as a result of this endeavour. We know that the Port Lucaya Marketplace and the businesses there have suffered as a result of a lack of traffic.

“We know that there is a magnificent marina right behind the marketplace that has significant potential. We are going to be carrying the message of this property and surrounding areas to the world, and we are confident already with the level of interest we are seeing.

“We hope that we would be able to attract Bahamian investors to this property or joint ventures for the property.

“This is not just being marketed abroad. But, we hope that locals with interest in tourism will come forward either directly or as a part of a partnership with a foreign developer,” Mr Cooper said.

“One of the things we are consistently concerned about in tourism is that we are not investing enough in ourselves in our major industry. That would certainly be a major achievement if it could happen.”

He stressed that the ideal investor for the property is one not just with deep pockets.

Mr Cooper also reported that tourism has rebounded significantly over the past several weeks and months. He noted that notwithstanding the challenges of COVID, the numbers continue to be very strong in Grand Bahama.

What a load of $hit

Just tell us when you get it sold. Updates every day or week about new potential investors that leads to nowhere seems to now be a trend.

Must disagree. We are always complaining about government not being transparent. I am no supporter of the PLP, for sure - but I must give the Devil his due - and keeping us informed and inspiring hope in the people (who currently many are committing suicide for want of hope) - is a good thing.

I seem to remember the FNM also trying to fill everyone with optimism at the start, with regular updates. They spewed the same story about "being optimistic" and having "numerous interested investors". However, those updates soon became less frequent and were typically along the lines of "we are close to signing a deal". We all know how those deals ended !

Mr: Julian Russell is a good decent man down to earth intelligent and always with a smile in greetings. If it can be done he will see to it that it is done.

A native Grand Bahamian who has a heart for his Country.

This man was here in Freeport shortly after election, he came back for the Brass Band concert, and he is back again... same speech every time but different words... Just do the airport and the hospital! It's no secret its messed up, it was that way from 2019... we don't need the reminder.