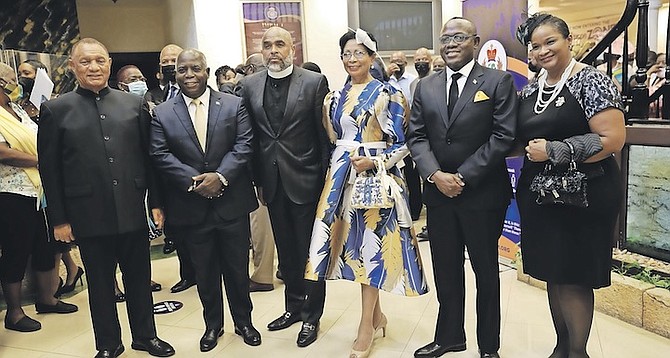 Speaking at a wreath laying ceremony to commemorate the 55th anniversary of the event at the Progressive Liberal Party’s headquarters yesterday, he said the occasion was “a symbolic reminder of the significant role the Progressive Liberal Party and the father of the nation played in bringing about one of the most consequential and transformational events in our history, eclipsed only by the abolition of slavery in 1834.”

Mr Davis said: “With the addition of national independence on July 10, 1973, these three epic events changed the course of Bahamian history forever and etched in the annals of history the Bahamian national identity and the depth of our indomitable spirit.

“We must never grow weary of telling our story lest we lose our identity and heritage as a people. Further — and more nationally — as a free, modern, democratic and independent state, history must record that Majority Rule Day is also an occasion where all Bahamians come together to reflect on and celebrate the enduring principles of democracy. Today then, I stand with my Bahamian brothers and sisters from all walks of life in memorialising this day as a seminal moment in the ever-evolving Bahamian story.”

Mr Davis paid tribute to the many unsung heroes and heroines whose endearing and enduring legacies of selflessness and shared sacrifices, he said, remain the gold standard of our national culture in both public life and in the way we conduct our personal affairs with one another.

“I continue to draw, conviction, inspiration and influence from the passion of the Suffragettes, the labour movement, the church and from countless Bahamians who put it all on the line to secure a more perfect Commonwealth,” he said.

He also remarked on the role the late Sir Sidney Poitier played and the contributions he made during the country’s journey to Majority Rule.

“As a Bahamian with dual citizenship, Sir Sidney used his celebrity status in the struggle for civil rights - fighting racism, bigotry and injustice in both the United States and The Bahamas.

“Many Bahamians still recall his speaking to the issue at a reception in his honour to the then United Bahamian Party (UBP) government in recognition of his Academy Award for ‘Lilies of the Field.’

“A well-known story in PLP circles is his assistance to the Progressive Liberal Party in the run up to the 1967 general elections. There is an iconic photo of Sir Sidney and Sir Lynden at the back of an open limousine celebrating the 1967 victory. May he rest in peace.”

The Bahamas gained majority rule for the first time on January 10, 1967.

On that day both the PLP and the United Bahamian Party (UBP) won 18 parliamentary seats during the general election, with the remaining two going to Randol Fawkes, of the Labour Party, and Alvin Braynen, an Independent.

Mr Fawkes sided with the PLP, helping the party to form the first black-led government. Mr Braynen became Speaker of the House.

Brave and his wife are out and about with no masks again.......holy moly......and absolutely no sign of the slightest social distancing.

You have to admit Perry Christie looks like a pincushion.

If majority rule is so significance, why it is that the majority still suffer, and the black elites are the one living in the lap of luxury? Why do we still have over the hill communities with outside toilets?

There is no significance to just changing the color of the master and the conditions of people have become worst and not better.

Absolute bullshyt! The majority are still poor, disenfranchised, and undereducated. There is no difference between the UBP, PLP, & FNM. They all take the fat of the land leaving the "majority" to fight over crumbs.

My GOD these damn politicians and religious leaders have no conscience or moral compass!

The time is rapidly approaching when Bahamians will realise they literally have no choice but to take their country back the hard way from the evil and sinister influences of the CCP, the alphabet soup international organisations (e.g., IMF, OECD, IDB, etc.), the corrupt politicians and the greedy low-life thugs who control the 'illegal' webshop and online gaming enterprises (e.g., Sebas Bastian, Craig Flowers, etc.).