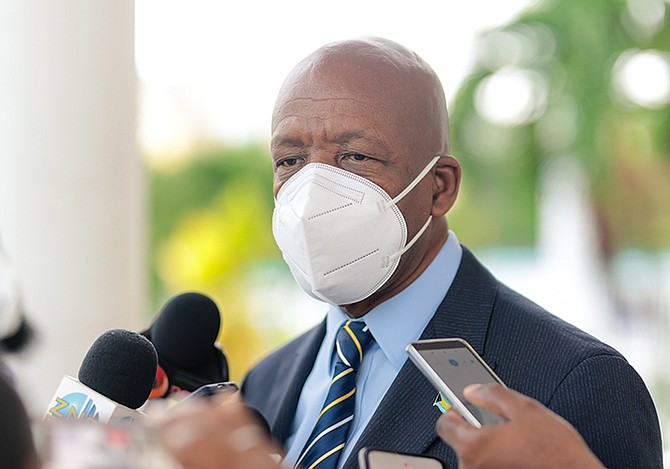 WORKS and Utilities Minister Alfred Sears says he is confident the chairman and board at Bahamas Power and Light will have detailed consultations with the union representing line staff to address long standing issues.

Last week, president of the Bahamas Electrical Workers Union Kyle Wilson told reporters his members were fed up over unresolved issues, such as unsafe working conditions.

Asked about the concerns yesterday before heading into a Cabinet meeting, Mr Sears acknowledged the issues the union has.

“The union at BPL, as they stated last week, has a number of long-standing issues related to human resource, related to pension and health and safety,” Mr Sears said. “I met with the president of the union several times and officers of the Bahamas Electrical Workers Union and most recently I would have met with the TUC, Mr Obie Ferguson, and the president of the BPL union amongst others and discussed their concerns.

“I’m confident that the chairman and the board at BPL will be having more (detailed) consultations with the union to address the concerns.”

When asked when these meetings would take place, Mr Sears says they should occur later this week.

Addressing union concerns over the BPL board and its newly elected chairman, Mr Sears that while the BPL board maintains autonomy over its own governance, a rapid assessment is being conducted on certain issues at BPL with a report soon to be delivered on the matter.

“We have a number of major road projects for New Providence. One of which is the re-engineering and the redevelopment of the Village Road area. Also, of course, the flooding on East Bay Street and road projects which also include Carmichael Road and various streets within New Providence,” he said.

He also addressed the fact that due to the impact of Hurricane Dorian, many of the Ministry of Works’ resources had to be diverted to reconstruction efforts in Grand Bahama and Abaco. He reassured the public that continuing road work is still a major priority.

Mr Sears also sought to allay any public fears that with the rise in COVID-19 cases, the Straw Market would be shut down. He said he is unaware of any plans to close the market nor any other business as he has been given no such recommendation by health officials.

For every hour Sears spends on the people's business, he spends at least 10 more in serving the 'illicit' interests of the corrupt numbers bosses like Sebas Bastian and Craig Flowers.