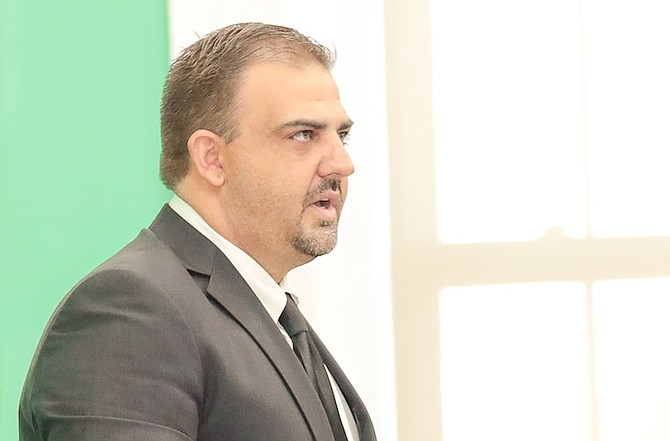 In a statement yesterday, the minister said many Bahamians were already looking for agricultural land to support the growth of cannabis.

His strong support for the industry followed confirmation last week by Director of Communications in the Office of the Prime Minister Latrae Rahming that the Davis administration intended to table draft legislation for the legalisation of cannabis in the first quarter of this year.

“A lot of the land that we need is in the Family Islands,” the minister said yesterday. “We don’t have enough agricultural land in New Providence to farm to what the industry can be. I think islands such as Eleuthera, Andros, Abaco and Grand Bahama have a lot of property that can be used to maximise the industry and in turn, create opportunities for other Family Islands.

“This industry can actually touch the lives of Bahamians nationwide. From a year or two ago, when the talk of marijuana came about, individuals started to scope our property themselves. It is not something the ministry was doing in regards to looking at where the property would be allocated. Our main concern now is that the legislation is done properly to ensure that all Bahamians have the opportunity to get involved and not just a select few.”

Mr Sweeting said legalisation of the industry would be a full effort with a number of ministries.

“The cannabis industry is not just agriculture. It works with the Ministry of Health as well as the Attorney General’s Office. So, we do have a skeleton legislation that we are revising. We haven’t put a timeline on it, but we are looking to work on it as quickly as possible,” he said.

“My ministry is working to make sure that it gets done as efficiently as possible. Hopefully, we will see the success story of what the industry can be before five years are complete.”

The government said it would introduce a “regulatory framework” for the cannabis industry and to expunge the records of young people convicted of minor offences related to use of the drug as part of its five-year legislative agenda.

Prime Minister Philip “Brave” Davis, while in opposition, expressed full support for both issues and said back in 2020 the Minnis administration should have already addressed the issue of legalising marijuana and expunging the records of people convicted for possessing small amounts.

A legal cannabis industry, that includes recreational, will create more jobs more quickly than anything else the government can do right now. The FNM missed the boat big time on this cus Dey is dumb. The opportunity for spin off businesses will be as big as farming and dispensaries. Please get this done and for Pete’s sake ignore the Christian council.

Many people have the impression that the marijuana industry will be lucrative and a quick way to get rich quick. But firstly when all the regulations are set in place, many will not qualify to become farmers or distributors plant. And, of course, big business will come in with resources, technology and influence and corner the market. The ‘smaller’ Bahamians will most likely become contract farmers, using their land and resources to grow crops for larger distributors. Then, of course, depending on how much government is willing to allow the recreational market to grow (6 million tourists). Some can become specialty farmers and grow different varieties of the crops. But there will be problems to be dealt with. The projection is that the marijuana market will become saturated by 2025 as more and more countries legalize the plant and more and more farmers begin to grow the crop legally. Then countries, like The Bahamas. will face problems from illegal growers who will try to maintain their market share. One thing they will do is flood the market (at least recreational) with cheaper products, making it impossible for legal products to sell or causing prices to fall and it becomes impossible for legal growers to make a profit. Then there will be the added costs of security on these farms. Some farmers of local crops are already experiencing having their farms raided through the middle of the night and even during the daytime. Some, larger, more sophisticated farmers will have green houses with electronic fencing.

I think targeting the family islands for the marijuana farms is a great idea. Not only will it produce much needed revenue & employment for these government neglected islands, but it will minimize the impact of the smell, which would be a major issue in the more populated islands. If you've ever been to the US West Coast, where there is an abundance of legal marijuana fields, you will know how many communities complain about the smell of the marijuana fields 5-10 miles away.

There is also a less likely chance of 'poaching' compared to larger populated islands, where there are more criminals

On the down side, it is unlikely that The Bahamas would be able to export any product grown here, so as John says, the market will soon become saturated

From sexy farming to growing weed....that's the extent of your creative thinking, Minister?

Public Health, evidence based, education and possible taxes should be the holistic approach. The roll-out of gambling legalization did not take Public Health as an equal priority resulting in massive economic, social and personal harms. Marijuana is not that kind of destructive creature but effectively harms by possibly interfering with the brains relaxation cannibinoid centers. A very sustained and hard workout produces the safest calming effect. But Marijuana use is endemic in the Bahamas according to PAHO and can be really obtained so as most countries saw prohibition ruined young persons lives through the court system and stigmaization overtook being informed. With legalization cones responsibility not the image of kids seeing normalization as a show off peer event as it will place them at a life disadvantage just chilling out for six hours and ignoring essential life activities. On the medical side Marijuana dosing is hard so it is shunned by pharmacy. Evidence though shows it could assist persons with chronic pains lasting over a year as a result of cancers, burns or other areas of nerve damage. Being cannibas certified calls for a lot of deep study into biochemistry of the brain and its reaction to pain, nerve damage, opioids and avoiding high THC potency. All Marijuana legally sold must be labeled according to THC/CBD percentages.