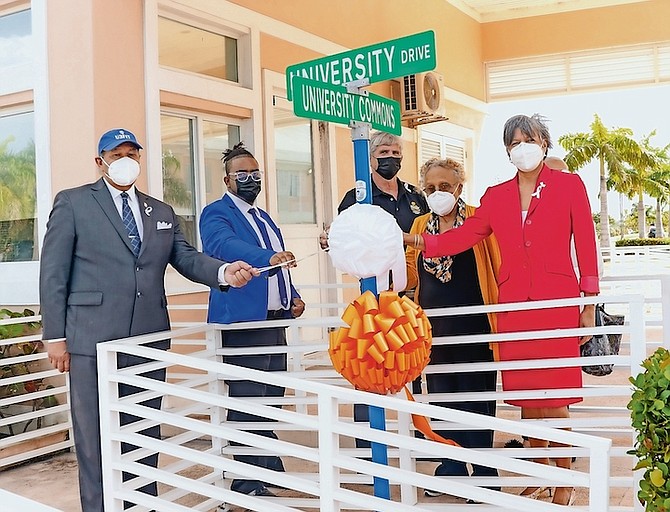 THE WHITE ribbon ceremony to mark the launch of the “UB Says No! Against Gender Based Violence” campaign. Photo: Donavan McIntosh/Tribune Staff

UNIVERSITY of The Bahamas has taken a firm stance against gender-based violence as it partners with the Bahamas Crisis Centre and Rotary Bahamas in a bold new social awareness campaign.

In his opening remarks Dr Smith said he was proud to be part of this initiative and announced the university’s commitment to end gender-based violence on campus.

“This white ribbon-tying ceremony is symbolic of the university’s commitment to raising awareness of gender-based violence and doing our part to end it in our community,” he said. “In particular, this campaign is keen to engage the students of UB and find male allies and forces to join and share the message that violence against women and children is abhorrent and wrong.”

He also pushed for the campaign to extend its reach to the legislative arm of the nation to enact new protective gender laws.

“Not only do we need to educate, we also need to work to ensure that there are good protective measures in place for those who face gender-based violence. We need to continue to advocate for changes to our laws and we must not tire till they are done.”

Dr Smith commended the Crisis Centre for its tireless work against gender-based violence and announced that a series of Zoom presentations would be launched later to help the organisation educate the public on this issue.

Dr Dean-Patterson said she was excited about the partnership with UB and was happy to work with Dr Smith once again as they had in the past advocated for mental health issues. During her remarks she stressed the need for all members of the public, especially men and boys, to join the fight against gender-based violence, as she believed it was an issue that does not affect just women.

“Many times, people say that’s a women’s issue, we don’t need to get involved, let’s let other people deal with that, but it’s an issue that affects all of us. Men, women and children. And we all have to work together. And so, this campaign which was started in Canada now has 80 countries around the world where men and boys are speaking up, speaking out their opposition to violence against women and children,” she said.

She hopes that with the launch of this campaign on campus they can reach an audience that was previously out of reach and gain new supporters.

“We’re reaching a target population that we haven’t been able to reach before and there are 4,000 students here. So, it’s an opportunity for us to engage them, start a discussion you know? Because you can talk about things, but you need to be able to allow people to ask questions and disagree. And we are hoping at the end of this we’ll have a cadre of UB students who will be crusaders or human rights defenders for UB.”

When asked by the press what actions would stem from this campaign on campus to ensure that students who encountered gender-based violence could seek help, Dr Smith said, “We have a very very strong counselling department at the university, and we also have a very strong student affairs division. Our dean of students, our dean Joe Stubbs, constantly encourages students to speak out about any kind of violence against them and we do have disciplinary rules and regulations at the university to protect our students.”

Dr Smith further encouraged any students who are being attacked or feel uncomfortable to report it immediately to the Dean of Students’ Office or any individual university authority, regardless of gender.