INSIGHT: Stories uncovered from the global conflict which touched our shores 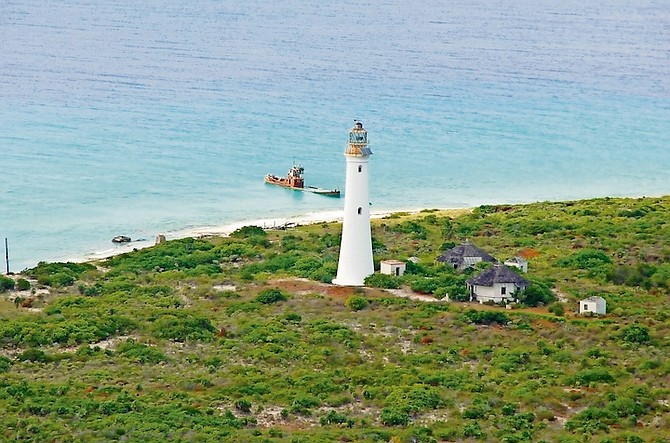 FROM top, a Douglas B-18 Bolo medium bomber of the type that crashed in Acklins; a Douglas A-20 Havoc similar to one that crashed in February 1943; a Patrol Sea plane from Squadron VP-34 was based in Georgetown, Exuma; and a crashed B-26 Marauder.

IN THE 1960s, an American woman returned alone to remote Acklins Island to commune with her dead husband who crashed there in World War II. But which of some ten airmen from three planes was he on, and can we verify as much with living witnesses?

In May of 2013, a team of volunteers working on my book U-Boats in The Bahamas voyaged from Crooked to Acklins islands, where they approached a community leader, the Rev Newton Williamson, and asked him about his recollections of World War II. However, while they hoped he would address the rescue of the 48 American sailors from SS Potlatch, he immediately pointed east, towards Mayaguana and the Plana Cays and replied “Plane went down someone down there. She came here, just to look at the place where the plane went down – maybe it gave her some kind of comfort. It went down between here and Plana Cays. Very sad. To give her some comfort.”

As often happens, this comment was branded an outlier, perhaps a tall tale, not relevant to the sailors’ rescue, and it wasn’t even made a footnote to our study. Until 2022 when, due to the discovery of a B-26 bomber in shallow water off Cable Beach, Nassau, further scrutiny confirmed that indeed, three US airplanes crash-landed on Acklins and adjacent Castle Island, and others were wrecked in the immediate vicinity. Rev Williamson was right, just as Capt Edward Lockhart was right about witnessing a huge amphibious airplane driving right into the trees of Great Ragged Island, and shopkeeper Ancil Pratt was right about a German U-Boat passing on the surface within sight of Clarence Town, Long Island. The rest of us just weren’t listening properly.

When historians fail, to paraphrase Rev Donne in 1624, “every man is a piece of the continent, a part of the main; if a clod be washed away by the sea, Bahamas is the less.” We pass over an eye-witness account at our own peril; they are leading us to unseen treasures. Which plane was the woman mourning crew from? While an untold number of aircraft crashed in the vicinity of Acklins in World War II – primarily on the long flight between Florida and Borinquen, Puerto Rico, there are three primary targets where aircraft were left in the sea and soil of Acklins or Castle Island, we know of three that touched ashore, and will focus on them.

On September 4, 1942, (just weeks after the RAF opened Windsor Field in Nassau), a US Army Air Force pilot named Ginter and colleagues were flying from Mitchell Field New York to the Caribbean when the aircraft experienced an engine failure. They made an emergency (“forced”) landing off Acklins Island. The likely result, since no deaths were reported and no aircraft landed ashore, was that Ginter navigated the plane into some of the hundreds of square miles of shallows in the Bight of Acklins, the men deployed their inflatable boats to make it to shore.

Once ashore, the American aviators would have contacted locals who reached District Commissioner Brown on Fortune Island. The commissioner usually sent his able second-in-command HV Wiley to arrange their repatriation. That was usually done via Allied airplane, high-speed boat, amphibious plane or even airship from either Naval Air Station or Naval Operating Base Georgetown, Great Exuma or NAS or NOB Guantanamo, Cuba. Their Douglas B-18A medium bomber was given hull #2539 and USAAF #37-539; little else is known. We know this because Allied aviators, navy and merchant sailors washed ashore on virtually every major island in The Bahamas in World War II.

On the morning of February 19, 1943, Captain Libby of the USAAF was piloting a Douglas A-20 Havoc (model B-DL, #41- 2931, MSN #5261), from Memphis Tennessee to the Caribbean on the first legs of its journey to the Soviet Air Force in the USSR. His was the lead plane out of six others that day, on the shorter leg from Homestead Air Force Base in Florida to Borinquen, Puerto Rico. Over the Crooked Island Channel and within sight of Acklins, the new aircraft was stricken with an engine failure.

At 12.40pm, Libby was forced to land in the marshy interior of small and remote Castle Island, off the southwestern tip of Acklins, not far from the 112-foot lighthouse built in 1827, injuring one of the crew. Witnessing the crash of their leader, the other six aircraft returned to Homestead, where they reported to Major Bondurant. He in turn informed the RAF in Nassau and initiated rescue efforts. At the time the northern Bahamas fell in the US Gulf Sea Frontier, and southern Bahamas was part of the Caribbean Sea Frontier, and so the former requested assistance from the latter. The US Navy dispatched the submarine chaser USS SC-696 to Castle Island from their large Naval Operating Base (NOB) in Guantanamo, Cuba. The sub chaser, which has been built less than a year earlier in Daytona Beach, was on its long route from Key West to Italy.

The wreckage of this aircraft was so prominent that it was still visible from ships and airplanes at least seven months later. On September 20, 1943, Captain O’Neil reported in Miami that after a flight from Puerto Rico that a “plane had landed on Castle Island in a marshy spot, with its wheels down. All hatches were open, and there were no signs of life about.” O’Neil diverted considerably to verify this intelligence by circling the area several times and observing closely from an altitude of only 300 feet.

Bahamian telephone services also received messages from passing ships “that a signal was intercepted from a ship off Inagua reporting that a crashed aircraft had been sighted on Castle Island.” Searchers verified that the aircraft seen had been lost previously. Sadly, the 110-foot rescue craft SC-696 was dive-bombed by German aircraft during landings in Palermo, Italy less than six months later. Along with sister ship SC-694 it was sunk with heavy loss of life.

The war was not finished with quiet Acklins, either. Almost exactly two months later, on April 7, 1943, a medium range B-26 Marauder bomber of the USAAF with four men also wrecked roughly three miles away, just east of the southern tip of Acklins. The men bailed out before the plane crashed and parachuted to earth, the pilot, probably being the last to bail, landing further away than the others. A communique reads “An Army B-26 en route to Borinquen Field from Morrison Field [now Palm Beach Airport] crashed in the vicinity of Castle and Acklins Islands.”

Immediately the US Navy in Florida, Exuma and Cuba initiated a search, as did the two large RAF bases on New Providence. That afternoon, an amphibious plane with tail number PSP 34P3 was sent from the US Navy’s NOB Great Exuma to find the men. They were airborne at 4.05 pm and returned at 8.05 pm to search at Crooked and Acklins islands for the four crew of the missing B-26. At 5.45pm that evening, the rescuers landed in Pompey Bay, on the central western, or sheltered coast of Acklins, about 20 miles north of the southern tip, and 120 miles east of Georgetown.

On arrival, they learned the pilot had become separated from the others, secured a boat ride from a local fisherman, and made it to Pompey Bay, which is inside the sheltered bight, near the island’s de facto capital of Spring Point. It being evening, the rescue pilot from Exuma left a note and an emergency kit for the stranded pilot, who was frantically looking for his three other crew, promising to return the next day.

Indeed at 6.35am the following morning, a different amphibious plane, this one numbered PSP 34P9, left Georgetown and landed in the waters off Pompey Bay at 8.30am. The fresh crew met and retrieved the pilot, then carried him 20 miles southwest to Jamaica Bay, which is a few miles west of Salina Point. They landed on the water and found the co-pilot and two other crew of the missing aircraft, who were wading in water with their dinghy and waving shirts to attract attention on shore.

The rescue plane then took all of them aboard and took off by 10.30am. About two hours later, at 12.35 pm, they landed back at base and released the entire B-26 crew safely to the care of the dispensary. It ended well for them, they were taken to a US base nearby, then transported by US Coast Guard rescue craft to Guantanamo Bay.

An aura of mystery, of uncertainty, hangs over this case. If all the men survived, who was the widow mourning? Was the memory of surviving the ordeal so vivid, either positively or negatively, that she was compelled to revisit as though in his shoes? Widows and widowers of the war that killed three percent of humankind have said they would give their entire lives since, families included, to spend a day with lost ones.

How can the island’s tall light house have been manned all those decades since, with folks living on the small island, without the aircraft being more widely documented? Many accounts by yachtsmen and others corroborate that an aircraft lay wrecked on Castle Island, including by author and artist Bill Johnson. Indeed, on a visit to Castle Island with a constable in 2000 I too recall – vaguely – seeing wreckage and a white wooden cross, and being told that a plane had crashed there long ago.

Perhaps because of the proliferation of small planes lost in The Bahamas, many of them private and foreign, and some in illicit trades, we have become accustomed to – even nonchalant - about air crashes and ship wrecks. Yet is seems that now is an opportune time to start unearthing and studying them while witnesses and wreckage are still with us, and because the technology and infrastructure has never enabled us as it does now; Google Earth, for example, allowing us to fly like drone pilots over our own islands looking for traces of these wrecks, matching documents with terrain.

We may never know precisely which aviator the woman was mourning in the fashion of Meryl Streep in The French Lieutenant’s Woman that day when Newt Williamson encountered her. We may not even solve whether it was a World War II casualty or an accident afterwards. We know she went there; we know there were three air wrecks in the war which physically left remnants in Acklins and Castle Island.

We know after a stumble a decade ago that Rev Newton Williamson, who with his cousins Clemese, Hewitt, Elva, Denza, Cox, Remilda Williamson, discovered and fed 48 shipwrecked and starving Americans a few months before, and with the help of Wilmore Bain, Rev Capt Samuel Albert Collie, and HV Wiley buried sailor David Parson, that many thousands of Bahamians have first-hand experience witnessing this global war. Now is the time to ask them about it. Now is the time to record their voices on iPhones and have them transcribed in seconds on an app. Who knows; it might lead you to an airplane near your home, as it did for me. And there are over 150 others in our archipelago.