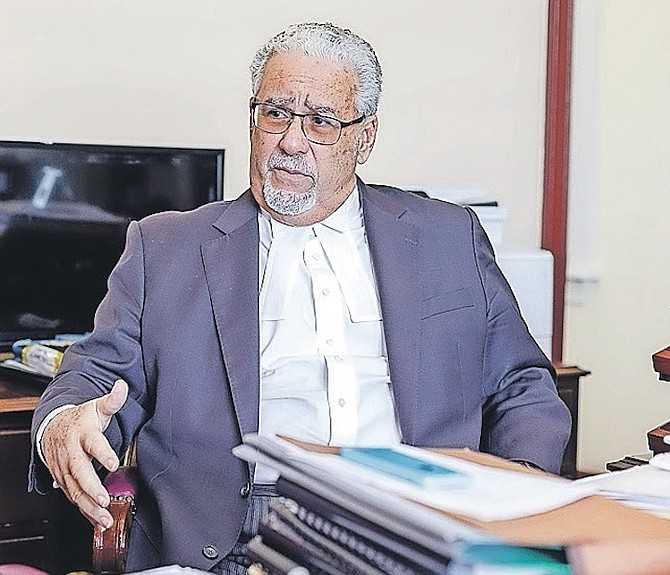 CHIEF Justice Sir Brian Moree says he’s disappointed the “critical”  Court Services Bill has not yet passed in the House of Assembly.

He told The Tribune he’s aware the Davis administration supports the proposed bill in principle but they have a very “busy legislative agenda and they haven’t yet gotten to it”.

However, he is of the view the bill should be “high priority” in the government’s considerations.

In January, Attorney General Ryan Pinder said the government was reviewing several key pieces of legislation, including the Court Services Bill, which it hopes to pass in Parliament to improve the nation’s judicial system.

The Chief Justice said he has stated publicly that he regarded the Bill as a “critical and transformative piece of legislation” and explained its necessity.

The Bill, if passed, is expected to allow the judiciary the ability to make its own decisions regarding how it spends its money among other things.

“In my view, it is absolutely necessary for this bill to be passed if we are going to fully accomplish our objectives within the judiciary,” Sir Brian said.

He acknowledged there will always be limitations and explained the judiciary will always have to be allocated its budget in the national budget through the Minister of Finance and “that’s perfectly accepted.”

“What we have been saying is that once the budget is allocated and it’s approved the judiciary then should have a large level of autonomy as to how it is going to spend those funds because it is the judiciary itself, which knows what is required. So, the Court Services Bill in my view is extremely important. I am disappointed that it was not passed in 2021 and I am disappointed that it hasn’t yet passed in 2022.

“I have been in discussions with the Attorney General about the Bill. I was in discussions with the previous government who I think supported it in principle because the Bill was actually tabled in Parliament prior to the election. I’m told that the current government supports the Bill in principle but they have a very busy legislative agenda and they haven’t yet gotten to it. I would say that I think that it is high priority piece of legislation. I think that it’s exceedingly important for the reform and modernisation of our courts and it is my sincere hope that this Bill will be passed shortly.”

“Clearly, our plan for a new Supreme Court complex was severely compromised by the pandemic and the financial crisis that came in wake of the pandemic and that’s understandable. Every country in the world had to adjust its financial commitment and many, many projects, which were on the boards so to speak, had to be either suspended or were postponed and some of them were even cancelled,” he told The Tribune.

“So, our plan to start the construction on the new Supreme Court complex was jeopardised by the pandemic and that’s understandable. It is a big project and it requires creative funding. So, we haven’t been able to take that project as far as I had hoped before Dorian and before the pandemic. Nevertheless, it remains an absolute priority for us in the judiciary. We know that financially one has to be realistic about this.

“I have discussed this with the Prime Minister and with the Attorney General and in principle again I think they want for us to start to look at it again obviously when we come out of the pandemic and things begin to stabilise and the financial condition of the country has improved. As soon as it becomes financially viable to do so, I think you’ll find we’ll go back to the plan to build a Supreme Court complex because that’s the ultimate solution and I’m sure that’ll be something which the new Chief Justice, my successor, will be looking at.”

Chief Justice Sir Brian Moree says he’s disappointed the “critical” Court Services Bill has not yet passed in the House of Assembly. He meant to say before he's set to be dismissed/replaced off/on the high bench. ... Still CJ Comrade Brian will spare us from the circus surrounding the exit of the Commish and incoming lawsuit settlement of the new Commish and Deputy ... Who ever heard such crazy things? You just can't make this stuff up and there's still the Governor-General to replace. ― Yes?

If his PM didn't pass it, why would he expect this one to do so

This sounds ignorant, but that's how it is in 242.