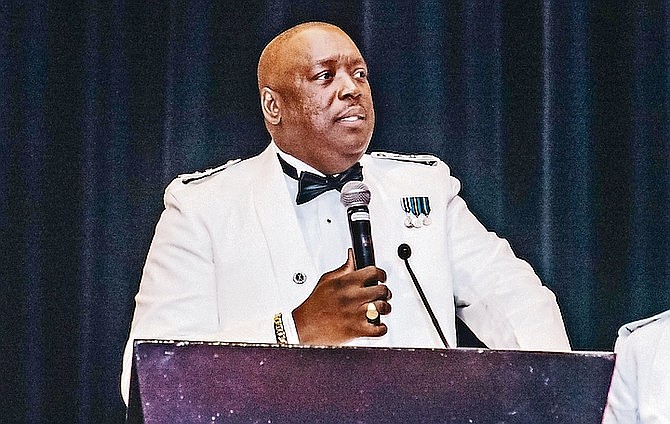 Order of The Bahamas

Medals for Acts of Bravery

BISHOP Lawrence Rolle, community activist Khandi Gibson and former police commissioner Paul Rolle say they are honoured and humbled for recognition of their service to the nation as recipients of the Bahamas’ 49th Independence Day National Honours.

They were among a long list of Bahamians that were recognised in Governor General Sir Cornelius Smith’s announcement of this year’s National Honours on July 10.

Mr Rolle, who stepped down last week after taking up the position in 2020, was awarded the Order of Distinction. While the former commissioner said that he is grateful for the award, he never expected to be rewarded for his work.

“I’m honoured to be recognised and be considered for the recognition and all thanks goes to almighty God for allowing the authorities to recognise me for such an honour,” Mr Rolle said. “I’m privileged. Personally it demonstrates the appreciation for when we serve in these offices. You don’t look for (a) reward but I’ll say I’m honoured to be considered for the award of it.”

Mr Rolle also told other Bahamians who are doing good that someone will recognise the value of the service they’re giving to the country.

“It’s public service, you know. All of us ought to give some kind of service back to our community and I would encourage everybody just in the interest of community to do their part. When I decided to be a policeman I never considered anything like this, but you know when you get into service and you enjoy service and your life becomes about service and you know at some point people recognise you for the service that you’ve given to the country. And I think for me personally it affirms that in doing good someone will recognise the value and the worth of what it is that you do.”

FOAM founder and chairperson Khandi Gibson said that she was deeply humbled when she got the call saying that she’d been awarded the Order of Merit for her years advocating for the families of murder victims.

She said: “I am just teary eyed, I am just so grateful, grateful, grateful, grateful. Truly I feel honoured. I feel blessed because on Saturday I was just so down and so depressed. I said ‘God I am only human and I’m just tired of being overlooked’. And I’m tired of just going unnoticed for the hard-work, not that you’re doing it for recognition, but my God you know you’re out here doing it from the goodness of your heart you know? And I was just thinking Khandi maybe you too open. People don’t like you because you speak too much for the people.”

Ms Gibson went on to say that it was after being encouraged to continue her work by someone that day that she got the call saying she had been given the Order of Merit. The FOAM founder expressed her sincere gratitude to the Bahamian government and its people for finally acknowledging all she has done for the community.

The Singing Bishop Lawrence Rolle said in view of his Order of Merit award he does not continue his food and social outreach programs for praise. The Bishop went on to say that while he appreciates the honour he still considers himself to be the least among us and a humble servant of the people.

He said: “To be honest with you, in all my days I was working helping people from about 9 years old. I am a Cat Island man. never really worked to be honoured. I won’t come down because I know one of these days my God is going to pay me. I appreciate everything, mind you but at the same time I know that my god is going to reward me but I appreciate the consideration of my country, I appreciate everything that the Lord would use. I believe that the Lord wired me to be or to help be this nation builder. I direct people. I show them the right not only in words but also In actions helping them . If I can help pay their bills I help, if I can help send them to college I help.

“So, to those the board or whoever took it upon themselves to consider somebody like me, let them know that I am the least among them far from being worthy. I don’t deserve it. I don’t deserve to be honoured but I’m working for heaven, I’m going to work while it’s day because the night is coming when no man will see the work.”

Next year is the 50th anniversary. Since all dead or alive got theirs this year, no one will be left for next year.

Not to mention that too many well known crooks are on that list thanks to their nomination by the very corrupt team of Vomit Christie and Cruel Davis. It's frankly a pitiful 'honouring' of too many infamous thieves and tax dodgers.