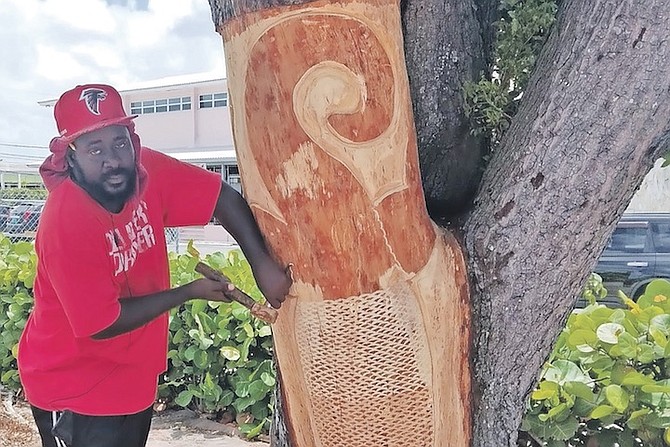 BAHAMIAN artist and wood carver Julian McKenzie believes he is fulfilling a vision God gave him in a dream – carving tree trunks and roots into amazing works of art.

Mr McKenzie, who was taught the basics in wood carving from a veteran wood carver, is transforming the Madeira trees into impressive wood sculptures on West Mall Drive in downtown Freeport.

The Tribune spotted this young man busy chiseling on a tree at the intersection of Pioneer’s Way and West Mall Drive on Friday and decided to get a closer look.

Mr McKenzie was carving a curly tail lizard, a native species of lizard that is found in the Bahamas, on the massive tree trunk.

He had been contracted by local authorities at the Grand Bahama Port Authority to transform the pruned tree stumps into wood sculptures.

According to McKenzie, he took on the challenge after other local artists and wood carvers had turned down the job.

“They looked around for several artists and everyone turned down the job because these big mature Madeira trees – we call it mahogany (with tough thick bark) - can be extremely challenging to carve,” he explained.

He knew this opportunity was the manifestation of God’s vision for his life. Although he had natural talent for art, he never honed his skills while in high school.

“I prayed to God to make me into an artist because I never excelled in art when I was in school,” he said. “After I became a believer, someone taught me the basics of wood carving and how to get certain cuts and angles.”

Mr McKenzie said he had a dream, and in the dream he and God went in the forest to cut wood.

“God cut down these three sticks for walking canes. I asked Him in the dream to let me have the stick when He cut it down. He said, ‘no I want these.’ He collected them and carried them off, but I stayed at the spot where He cut down these trees and I noticed the stumps that were in the ground, and each had something etched in them.”

McKenzie said one had the etching of a hand spread out up to the wrist, another was of a face and the third was the head of an animal.

“In the dream, I was amazed by what I saw. When I awoke, I thought it was a silly dream that did not make sense. But as time went by, I found out that the dream would come to manifestation of what it meant.”

“Every piece of root, every bulge or knot in a tree, I can see art in them, he said. I see art in roots and stumps and that is what the vision meant. My testimony is that God turned me into the artist that I am. He opened my eyes and gave me the vision.”

Mr McKenzie said the shape of the tree root in the ground was the inspiration for creating the curly tail lizard sculpture.

“I turned the root into the lizard’s head and other roots going into the ground into its two limbs,” he said.

Although wood carvers in the US use chainsaws for huge tree wood carvings, Mr McKenzie uses only chisels, a gouge, and a handmade mallet.

“I take my time doing my art. Some artists can finish in one day, but I like to go away and come back to it,” he said.

After he completes a piece, it is given a protective finish. The first tree sculpture he did was that of two fish – one of a Grouper - on a nearby tree.

Wood carving has been a part of Bahamian art and culture for years. However, it is believed that it is a dying art. Maybe young artists like Mr McKenzie will inspire a new generation of artists and wood carvers to carrying on this rich culture.

In the meantime, Downtown Freeport is currently undergoing a major revitalization to attract visitors and locals to the area again following devastation caused by Hurricane Dorian in September 201 when businesses and buildings there were affected by storm surge.

The GBPA, through its Keep Grand Bahama Clean Committee, has undertaken a major beautification project in the city, which includes using local artists to create art pieces at the roundabouts of major thoroughfares, promoting environmental art.