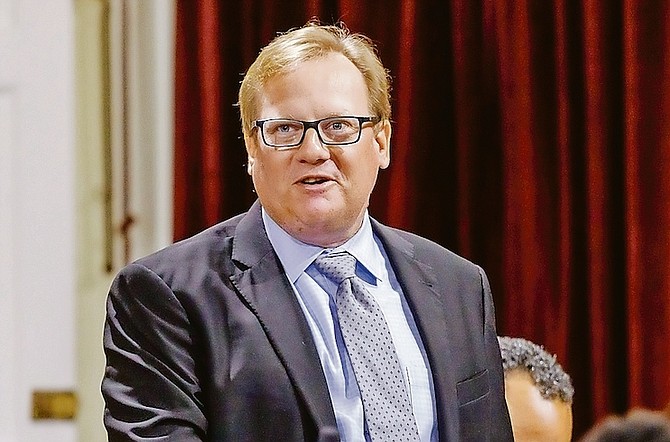 ATTORNEY General Ryan Pinder says the amendment to the Rehabilitation of Offenders Act will correct the “grave injustice” to people criminally convicted under the Emergency Powers Orders.

Mr Pinder told the Senate during his contribution to the debate that the amendment will be used to correct imposing criminal violations and records on Bahamians for minor or unintended violations under the Minnis administration.

“We faithfully promised to expunge COVID convictions from the criminal records of those persons who had fallen afoul of the Emergency Powers Orders and were convicted of breaching the Covid-19 restrictions, or failing to comply with requirements,” Mr Pinder said

The Attorney General underscored that accompanying the bill is an order declaring the relevant offences in respect of which conviction records may be expunged.

In his criticism of the emergency orders, Mr Pinder stressed the bill is needed due to the “harsh” and “unfair” governance to The Bahamian people by the former administration during the COVID-19 pandemic.

“We understand that no one had governed during such a global pandemic in our lifetime, but the fact remains, the FNM government governed themselves poorly and penalised Bahamians for trying to live during these incredibly difficult times. Arresting people trying to get water at the stand pipe, arresting coconut vendors trying to make enough to live, having us go to the food store by last name, double standards for some in the west as compared to the rest of us that live throughout this archipelago.”

From the opposing side, Senator Darren Henfield in his remarks noted that the world determined that segregation of infected individuals was the only way to treat the virus at the time.

He said: “The world, not only in The Bahamas, the world moved to segregate infected individuals. So we saw the lockdown first coming in China and then because China lockdown was so effective there that lockdown then sort of waved all across Europe. And then eventually here.”

Mr Henfield noted his government was faced with a tremendous task and stressed the country’s health care system could not take an influx of infected people.

He added: “Did we do everything right with COVID-19? No, we didn’t. You can judge us, history will judge us, but we did what we thought was in the best interest of The Bahamian people.”

Ryan Pinder said: “The Bill provides for the general authority of the Minister to declare certain persons rehabilitated."

Just how stupid does this dumb arse AG think we are?!

Most of us know full well that the Bill is intended to be a pressure release valve for dealing with the very serious over-crowding situation of inmates in our prison system.

Every time a criminal is incarcerated today, another criminal must be let out to make room for the new one. This has been going for decades now and our communities and streets have become flooded with criminals, many of whom were made 'hardened' to violence while incarcerated.

The Bill is likely unconstitutional as it seems to be an all out affront on the separation of powers doctrine that provides the foundation for our Westminster parliamentary system of government. No cabinet minister should ever be granted the power to usurp the functions of the judicial branch of our government.

We really need a class action legal action against the Competant Authority, PAHO, WHO, fayci and the computers gone crazy man god of his all with his corporate world dictatorship trillions. We are mere slaves and easy prey to the G7 anti God pro golden Calf Sodomites.