FACE TO FACE: Samantha and Seasuna bring something magical 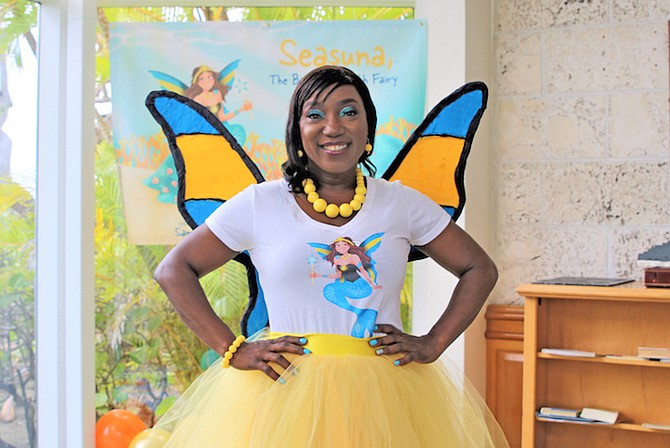 SEASUNA the Bahamian Tooth Fairy made her debut appearance right in time for the 49th anniversary of Bahamian Independence. Children – and even adults – were transported to a magical underwater land filled with fascinating creatures and stories of hope. Seasuna appeared at the Atlantis Library, Reef Wing, at the Coral Towers on Sunday, July 10. The library was transformed with sea bubbles, underwater scenes, dress-up costumes, face painting, mermaid cupcakes and more. Most importantly, Seasuna brought it to life reading her book that highlights the wonders of the Bahamian sea and the happiness it brings.

The author, Samantha C Black, is the living Seasuna, and those gathered at the library took to her as she brought the fairy to life. Kids were all smiles and gave the event rave reviews, while even a parent or two commented that Seasuna’s story gave them a sense of hope in their own lives. 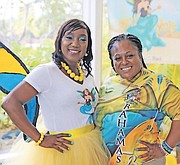 That’s exactly what Samantha wanted to achieve. She believes in touching lives and spreading a bit of happiness with the touch of her magic wand and a Bahamian flair.

“Story time was one of our main events for children prior to the pandemic,” she explained.

“To relaunch it, we wanted to create an interactive platform where kids could feel comfortable and feel like they belong. It’s all for our little ones. We wanted to make it our own, so we invited Seasuna to be the one to relaunch it and make it fun.”

Samantha surpassed expectations, not only because of her book, but because of her personality. Her desire to see children happy and able to transform their own lives with positive attitudes comes from a personal place.

She was born in the settlement of Green Castle, Eleuthera, to Euletha Fraser and Leroy Musgrove (both deceased). Euletha was just a teenager when she had Samantha. Therefore, Samantha was raised by her grandmother, Cola Fraser, in Nassau.

“Money was always short and we had to live day by day,” she recalls.

“I watched my grandmother struggle to keep food on the table for my aunts and uncles – including myself. Although frustrating at times, I would keep hope alive by chanting quietly to myself while sitting on the floor with my back to the bedroom door: ‘One day it’s going to get better’. That ‘one day’ seemed to be a thousand years.”

Samantha also ended up becoming a teenage mother: “The days seemed endless and tiring, but I had to pull through. I was taught at a young age that there was a God who loved and cared for me. This carried me through many of the difficult times as persons would be placed in my path who, at most times, were a blessing. What I did not realize was that all of this was a strategic plan to my overall success.” 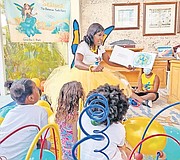 SEASUNA and the kids having fun in an underwater fairy land at the Atlantis library.

At the age of 18, Samatha married Anthony Black, Sr. They have been married for 32 years and bore four children: Anthonique, Anthony Jr, Travis and Benjamin. She is also sister to Waynett, Anthony, Giovanni, Dezmond, Monique and Vanessa. In every aspect of her life’s journey, she has learned to appreciate the value of family while understanding that the power to change her own circumstances must come from within.

“From the roles of housewife, housekeeper to cashier, then receptionist – to media and public relations director, I continued to grow. I became a video editor, then went on to senior video editor, executive assistant and now media specialist and author. I decided to venture out into furthering my education at the Bahamas Technical and Vocational Institute (BTVI). It was after attending this institution that my idea to pursue book writing was born. I would like to highlight the support of my English teachers, Ms Archer and Ms Josier. The many challenges of the COVID-19 pandemic (including the lockdowns) contributed to me finding the time to settle down and write, then make the book a reality.”

The teachings of Dr Myles Munroe, as well as Joseph Murphy’s book “The Power of the Subconscious Mind”, served as motivation for Samantha to become an author. She watched many of his sermons and read his books, understanding the power of the subconscious mind to make dreams a reality.

These were all pathways on her journey to becoming an author and making her dreams a reality, she told me. 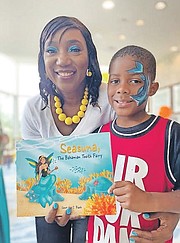 “It was thrilling! I said to myself, ‘This is interesting!’ I had my mind on another type of fairy, but this idea happened to override my original fairy idea. I was passionate about it because from a young age, I always loved to read and write. So, I put pen to paper and began writing down my thoughts. After reading it back to myself and sharing it with some immediate family members, I realized that this was something special. I began to research how to go about writing a book. It was during this time that I found my amazing illustrator Zhanna Kibassova, who brought my character to life. This is the overall product today - the book Seasuna, the Bahamian Tooth Fairy by a self-published Bahamian author.”

Samantha transformed herself into Seasuna for the kids at Atlantis. The rave reviews have opened her mind and heart even further to the possibilities that her creative talents can bring. She realizes that once it comes from the heart, people will receive it well; and she is ready to continue to explore her skills and talents.

The smiles on the faces of the many kids touched by Seasuna are also inspiring for her.

“No matter what you or I may say, children’s beliefs are magical,” Samantha stated.

“I believe in happiness. With magical thoughts, happiness and a Bahamian underwater theme - where could one go wrong? The Bahamas is one of the most beautiful places on planet earth and I am so grateful that I could put a smile on the faces of many children that would encounter the most amazing Bahamian underwater experience with Seasuna.”

To be touched by the Bahamian Tooth fairy, email bahaseasuna@gmail.com; call (242) 454-0053; or check out Samantha’s Bookmark on Facebook. Samantha gives special thanks to all of her family members, friends and supporters who helped her to make her book a reality. She is motivated to continue her quest to touch lives with happiness.

That's all we have, hope and dope.