PETER YOUNG: A breakthrough of sorts - but will the Russians stick to it? 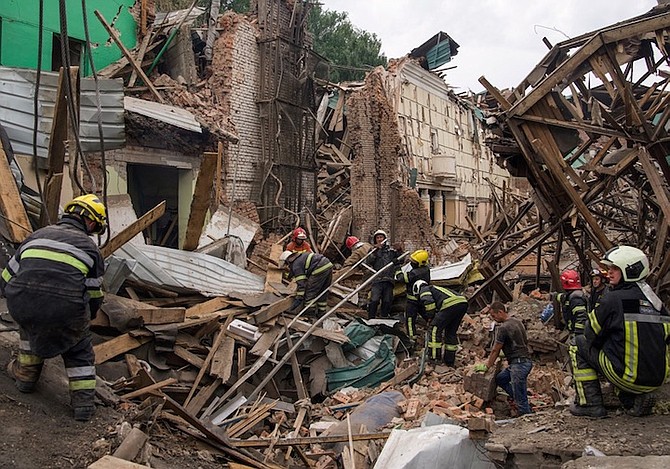 A major development in the war in Ukraine has raised faint hopes of peace in the longer term. An agreement with Russia was signed last week to restart the export of grain, though there is a danger that it may have already been derailed because of the firing of missiles at the Ukrainian Black Sea port of Odesa over the weekend.

The war has been littered with falsehoods and broken promises. So, given Russia’s reputation for covering up the truth, it perhaps came as no surprise that at first it denied responsibility for this strike barely 24 hours after the deal had been signed to allow resumption of vital grain exports through Black Sea ports.

Despite its initial denials, Russia has subsequently admitted its forces targetted Odesa, though it maintains they were aiming at military installations which, they claim, is not prohibited under the terms of the agreement. Whether or not that is true, the Ukrainians say the Russians are already in breach of the deal. Moreover, this action is likely to undermine trust that they will keep their side of the agreement to allow the safe passage of loaded cargo ships through the Black Sea which they are currently blockading.

Brokered by the United Nations and Turkey, the deal was seen as a major diplomatic breakthrough after lengthy negotiations. UN Secretary-General, Antonio Guterres, called it a beacon of hope since it could lead eventually to an ending of the conflict. He added that he considered it to be his most significant achievement during his time in office.

Ukraine and Russia together export nearly a third of the world’s wheat needed to feed millions around the world, particularly in sub-Saharan Africa and the Middle East. If implemented, the agreement should help to avert famine by putting more wheat, corn, sunflower oil, fertiliser and other products on to world markets – and, despite the new threat of it being scuppered by the Russians before it has even started, the successful negotiation of it in the middle of a war is surely a remarkable feat.

In order to assess whether this might lead to peace in the longer term, people will no doubt listen to the views of no less an authority than William Burns, Director of the CIA and a former US ambassador to Moscow. His most recent comments have come after the US announced it would provide Ukraine with more long-range weapons and after the Russian Foreign Minister, Sergey Lavrov, warned that Russia’s military focus was no longer “only” in the east of the country.

The CIA director has said that Putin - who reportedly, despite the rumours, is not seriously ill - is convinced his destiny as Russia’s leader is to restore the nation as a great power and that the key to doing this is to recreate a sphere of influence in the region. He thinks that cannot be done without controlling Ukraine which he genuinely believes is not a real country separate from Russia. But Burns contends Putin’s plans for “a special military operation” were based on flawed assumptions, especially about Ukraine’s will to resist and fight back. He had thought he could quickly establish dominance over the whole of the country, but events have shown he had seriously miscalculated the situation and the invasion had been a strategic failure.

Despite Lavrov’s latest warning, five months since the start of the war, and having failed in its original aim of capturing Kyiv, Russia has claimed its main objective was liberation of the eastern Donbas region whose Russian-speaking population had, allegedly, been victims of genocide. But, as Burns goes on to say, Putin considers that a scaled-down strategy of attrition will grind down the Ukrainian forces and break the will of the US-led alliance which will become distracted by some other world crisis.

Meanwhile, reports have surfaced of the 91-year-old former leader of the Soviet Union, Mikhail Gorbachev, being upset by Putin’s actions – not only his invasion of Ukraine but also his crackdown on domestic dissent about the war with authoritarian laws making criticism an offence.

Gorbachev was General Secretary of the Communist Party of the Soviet Union from 1985-91 and its last President. He ushered in changes that led to the downfall of communism and of the USSR itself. He instituted economic reforms and political freedoms – known as perestroika (restructuring) and glasnost (openness) – that allowed for multi-party elections, greater freedom of speech and open discussion about politics. These reforms also led to an easing of tensions between Moscow and the West and a decrease of NATO forces in Europe. Reportedly, Gorbachev now feels that his life’s work is being destroyed by Putin, since his reforms have been turned to ashes and his legacy has been undone.

Notwithstanding all this, while continuing to condemn the horror and evil unleashed by Putin with his invasion of Ukraine in February, more and more commentators are now increasingly optimistic that the grain deal might lead eventually to at least a limited cessation of hostilities. But, as someone has said, the Russians are “predictably unpredictable” and a return to peace may still be a long way off.

LIZ TRUSS, left, and Rishi Sunak, who are vying to be the next British Prime Minister.

In Britain, the Conservative Party leadership race has been top of the news agenda since Prime Minister Boris Johnson’s resignation earlier this month. I wrote last week briefly about the contest to choose his successor. Since then, the process has advanced to the extent that Conservative MPs have now whittled the number of contestants down to two finalists – former Chancellor of the Exchequer, Rishi Sunak, and Foreign Secretary, Liz Truss. Now they face a vote by Party members up and down the country before the winner is announced on September 5, and in the coming weeks they have an opportunity to explain their ideas and proposed policies.

Who becomes leader of the Conservative Party and thus Prime Minister is inherently important given the UK’s standing in the world. So it is worth examining developments further.

It is, of course, the job of the Fourth Estate to hold politicians to account. The UK press is invariably critical of the political class, with one acid-tongued reporter famously labelling politicians as “duplicitous and deceptive double-dealers”. But I wonder how accurate the headline in one newspaper will turn out to be - “Rishi or Liz? Not even the most fervent Tory could pretend it’s a great or inspiring choice”. That remains to be seen as people recall the slow start made by Margaret Thatcher, one of the nation’s most famous leaders.

Having held office as a government minister, each has much relevant experience. So far, the consensus seems to be Liz Truss is marginally in front, with people praising her qualities as a potential leader.

She is credited with securing a number of post-Brexit trade deals and has a reputation for being self-assured and tough with a strong work ethic and a robust commitment to Conservative principles and values. Rishi Sunak is similarly well qualified and is the better speaker of the two. He was the frontrunner from the start but his popularity appears to have waned because of his vast personal wealth and controversy over his wife’s tax affairs. He is also being blamed, as Chancellor, for the nation’s current economic woes and cost of living crisis and for increasing the tax burden -- and he is being criticised for disloyalty in precipitating Johnson’s downfall.

The indications are that the contest will end up as a close call. A variety of issues, including the thorny one of immigration, will doubtless come up during the coming weeks. But, mindful of the phrase - “It’s the economy, stupid” - which became the slogan for Bill Clinton’s successful US presidential campaign in 1992, perhaps it will all come down eventually to how each promises to manage the national economy.

Britain is now faced with high inflation, and the cost of food, fuel and mortgages is set to soar. This is similar to the 1970s when the new Thatcher government successfully navigated its way out of the mess by cutting taxes and revitalising the nation’s entrepreneurial spirit. From the evidence so far, Liz Truss seems to be shifting the more recent economic debate by saying she will cut taxes, stimulate growth and bring public spending under tighter control while reducing the size of the state and increasing the pace of deregulation to boost productivity. For his part, Rishi Sunak is probably at a disadvantage because of criticism of his existing record as Chancellor when he raised taxes. But he has said that his priority will be to get inflation under control and rebalance the public finances before considering a reduction of the tax burden.

In the coming weeks, both will surely explain their policies more fully on the hustings across the country and in the media as they vie for the top job. The month of August is traditionally a time for holidays, travel and getting away from it all. But this year it will be fascinating to watch the progress of both as they seek to persuade Tory members of their suitability and fitness for the highest office – and the rest of us can only watch and wait until the winner is announced at the beginning of September.

In other news - if only people watched it

An example of the US media’s apparent reluctance to cover foreign news stories is the current unrest in Sri Lanka. Violent demonstrations by huge numbers of protestors sparked by the country’s severe economic crisis, which has led to shortages of basic necessities, are being covered daily by the BBC, but, as far as I can see, not by TV and radio stations on this side of the Atlantic.

Since many viewers and listeners in America often have little interest in events beyond their shores and media organisations are driven by commercial needs, perhaps it is no surprise that they concentrate on domestic issues. Nonetheless, there are those in modern America who consider that news outlets ought to be required at least to keep people informed generally about what is going on in the rest of the world.

International observers now suggest what is happening in Sri Lanka could spread to other Asian countries. Put simply, Sri Lanka is reported to have run out of money. It has high debt levels and is struggling to pay for crucial imports like food, fuel and medicines for its population of 22 million. Despite forcing through political change at the top, with a new President and Prime Minister, public unrest continues and may only get worse.

According to the International Monetary Fund, other countries in the region with high debt levels are similarly vulnerable economically. Fears are now being expressed that those like Laos and Myanmar, among others, are being affected by rising inflation, interest rate hikes, depreciating currencies and dwindling foreign currency reserves.

Some commentators now wonder whether China sees all this as an opportunity to become involved in picking up the pieces with a view to spreading its influence in the region. If so, that ought to be of interest to the US given China’s long-term international goals which have been well publicised. But perhaps this will only apply to the policy-makers because, unless he sees it on TV, the man in the street will be unaware of what is going on.