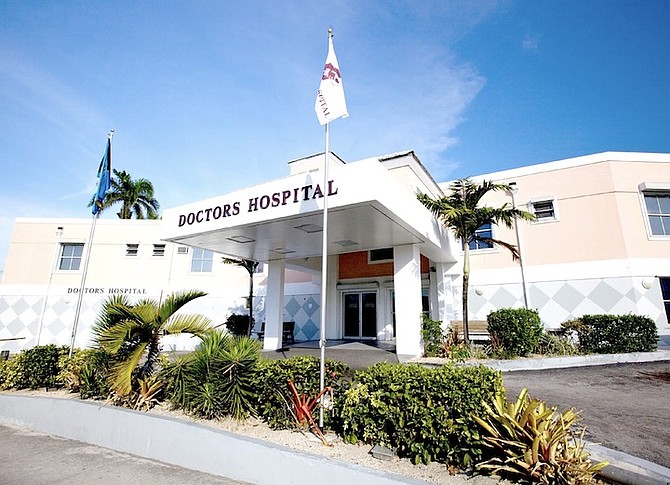 Dennis Deveaux, the BISX-listed healthcare provider’s chief financial officer, told Tribune Business that top-line income unrelated to COVID testing and hospital treatment enjoyed a $7m monthly “run rate” during the three months to end-April - a level that was up to $2m higher than pre-pandemic figures.

With COVID sufferers now making up less than 10 percent of Doctors Hospital’s typical daily patient census, and combined PCR and rapid antigen tests having fallen off to around 15,000 per month compared to a 100,000 peak, he added that Doctors Hospital is now focused on “expanding access to our services” as it executes on multiple expansion opportunities.

Mr Deveaux told this newspaper that the company’s downtown Nassau pharmacy and drug store, which will be located at The Pointe, is intended to “bridge the gap” for both Bahamians and tourists who frequent the area as their medical needs are presently “not really served”.

He added that construction on Doctors Hospital’s Georgetown clinic is 75 percent complete with plans to open the facility within the next three months. Both that location and the just-opened Eight Mile Rock clinic in Grand Bahama will be enrolled as providers in the National Health Insurance (NHI) network once the Authority that oversees the scheme completes its inspection of both sites and gives the go-ahead.

Demolition work at Freeport’s former First Commercial Centre, the site of Doctors Hospital’s new Grand Bahama hospital, is scheduled to be completed by August 8, and Mr Deveaux said it remains on track to open by mid-2023. He disclosed that Nassau’s “tight labour market” had driven the company to target Grand Bahama for “back office” workers in areas such as finance and administration, who will be placed across its facilities and not just on that island.

And Doctors Hospital’s financial chief said inflation was “not a material concern” for the healthcare provider despite seeing price increases ranging from 3 percent to 7 percent since its 2023 financial year began on February 1, 2022. Prices for its out-patient services have been held constant and, with trends over the past two months not signalling the need for any increases, he added that end-consumer costs may “go in another direction” - down.

Tribune Business reported yesterday that Doctors Hospital had enjoyed a $58m revenue boost from COVID-19, spread over the past two financial years, and Mr Deveaux affirmed it is now refocusing on “organic” or natural growth by expanding the provision of healthcare services throughout The Bahamas having viewed the pandemic’s impact as a one-off event.

The relaxation of COVID restrictions at home and abroad, especially in the US, has significantly cut testing demand while vaccinations and more moderate strains of the virus have lessened hospitalisation rates. “Our in-patient census may have two to three COVID patients in an overall census of 35-37 patients, which is less than 10 percent. That’s great news for the country,” Mr Deveaux told this newspaper.

“On the testing side, we’re still doing a decent amount of testing, anywhere from 15,000 COVID tests per month. That’s a fairly low level for us. That’s obviously much lower than the peak of 100,000 per month. But the key narrative that we’re happy about is when you look at non-COVID revenues and compare that to pre-COVID, which means you have to look at almost financial year 2019.

“We’ve seen a very significant uptake in organic or core activity. People had deferred traditional healthcare services for so long, so there’s a bit of a catch-up surge that we’re experiencing in the non-COVID space,” he added. “We have actually seen, when you look at pre-COVID revenue developments, our pre-COVID revenues were anywhere from $5m-$5.5m a month.

“What we have now seen in the first quarter [for the 2023 financial year] is our non-COVID revenue is actually on a run rate of $7m per month. That’s a very significant change in our core business in a very short period of time. That tells us there’s pent-up demand and, as a result, we’re expanding access to our services..... The key thing has become, looking at pre-COVID organic to our current organic revenues, that’s gone from $5m-$5.5m to $7m a month.”

That represents a monthly revenue increase of between 27 percent and 40 percent for non-COVID income compared to pre-pandemic data. Mr Deveaux estimated Doctors Hospital had earned around $4m in COVID-related revenues for the 2023 first quarter, which represents the three months to end-April, and said: “I think our first quarter run rate is unlikely to be matched in the second and third quarters; we don’t expect the same level of activity through the year.”

Doctors Hospital is expanding medical services access by creating a new specialist internal medicine group at premises on Dowdeswell Street on New Providence, as well as adding two operating theatres at a new outpatient surgical centre in Centreville. COVID testing sites at Carmichael and Meldon/Palmdale, now that US and Bahamian entry restrictions have been relaxed, will be converted into medical access centres.

“We didn’t wait until COVID had started to wind down to identify expansion opportunities. People need more access to high quality and affordable healthcare,” Mr Deveaux said. “What we’re very proud of, and we’ve committed to this, is we’ll have price and quality leadership in the outpatient space. We have that as our value proposition. We have to demonstrate we are accessible and affordable, and then have price leadership. That’s what we’re up to.

“What we have in mind, in the next 30 days we’ll be opening up a brand new pharmacy and drug store at The Pointe in downtown Nassau, Bay Street, to cater to the downtown market and increasing tourist population whose medical needs and pharmaceutical needs are not really served in downtown. We hope to bridge that gap. Within the next 30 days, people can expect that to open.”

And, within “the next 90 days”, Doctors Hospital’s clinic in Georgetown will open as a location where NHI beneficiaries will be able to see their doctor free-of-charge and also obtain their medical prescriptions. “We’ll have an x-ray on the ground and portable ultra sound,” Mr Deveaux said. “We might even make a decision to put more imaging on the ground.”

Alluding to the recent tragedy at Sandals Emerald Bay, where three guests died from carbon monoxide poisoning, he added: “We need to provide reassurance to tourists and residents that quality health care is provided. We intend to meet their urgent healthcare needs, and if something happens beyond that co-ordinate evacuation to Nassau or back to the US. We view that as critically important.”

Pointing out that ease of access to quality, affordable healthcare is a key factor for investors and tourists in determining their intended destination, Doctors Hospital’s chief added: “We believe that’s a role we must play, and look forward to doing that at a national level.”

Revealing that Doctors Hospital had not felt the impact of global inflation until its new financial year started on February 1, Mr Deveaux said: “This year we’ve seen inflation anywhere from 3-7 percent, especially on things we import. We have managed that mostly by not changing prices on the out-patient side, keeping things affordable and accessible, and it’s really been on the in-patient side where most inflation has been felt.

“Right now, it’s not significant enough to pass on to patients on the out-patient side. We’ve not seen anything over the last two months in particular that suggests we need to change prices to the end consumer, and we may be going in another direction in our out-patient space to make it easier with access and affordability. Right now, inflation is not a material concern.”

Mr Deveaux said the Eight Mile Rock clinic had “got off to a fast start”, seeing between five to seven patients per day, and this count is expected to rise to around 20 once it joins the NHI provider network.