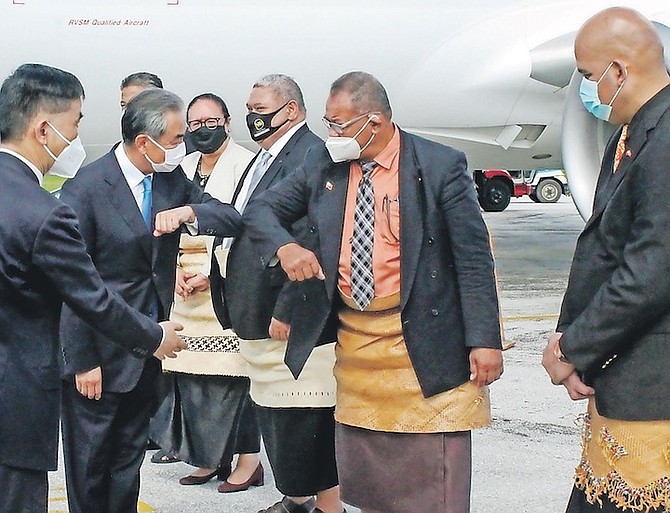 CHINA’S Foreign Minister Wang Yi, second left, is welcomed on the tarmac by officials on his arrival in Nuku’alofa, Tonga, on Tuesday. Photo: Marian Kupu/ABC via AP

BEGINNING last week, China’s Foreign Affairs Minister Wang Yi embarked on an unprecedented ten-day tour with a delegation of 20 to ten Pacific Island countries with which the People’s Republic has diplomatic relations.

The states not visited – Tuvalu, Palau, the Marshall Islands and Nauru – maintain diplomatic relations with Taiwan.

During the tour, the Minister met his counterparts in a virtual joint meeting. His first such meeting with the group of foreign ministers took place in October last year. China is expending considerable foreign policy energy in the region.

Foreign ministers of world powers rarely undertake such long tours of smaller powers. What does the mission by Minister Wang suggest about China’s geopolitical and geoeconomic ambitions in the Pacific and globally?

What does it portend for other regions, including the small island developing states of the Caribbean, including The Bahamas?

China is an increasingly confident world power in competition globally with the United States and, regionally, with powers like Australia in the Pacific. The rivalry between the world’s two largest powers will continue to grow, with other countries having to carefully negotiate their relations and interests with both.

Both America and China have international and domestic strengths and weaknesses that will buttress and delimit their reach and appeal depending on the regions and countries in which their rivalry will play out over the coming decades.

Great powers have always sought to protect their land and maritime borders and project their power in their regions. The notion by the American policy elites that it is legitimate for the US to project its power but that China should limit their projection of power is arrogant and ahistorical.

To solely or mostly frame the US-China rivalry as merely a competition between democracy and autocracy is simplistic. Nation-states have always had to negotiate relations with larger powers, most recently during the Cold War and the intense superpower rivalry between the Soviet Union and the United States.

Even today, with the Russia Federation a lesser power, countries like India, South Africa and other African states, Israel and other countries, have had to take into account certain national interests during the war in Ukraine.

Further, over the decades to come, how will India project its regional power and interests beyond the subcontinent? Of note, India will surpass China in population size as the latter faces demographic challenges because of an ageing population and lower birth rate.

Global power is measured in more than military hardware, though such power should not be underestimated as is evidenced in the war in the Ukraine. The United States remains the world’s leading power on many fronts, and is likely to remain so for some time.

Still, economic and soft power will continue to play a significant role in geopolitics. India sent vaccines to the Caribbean and The Bahamas before the US. The fellow-Commonwealth country also responded with assistance after Hurricane Dorian.

Though small in terms of land mass and population, the Pacific Island states have vast maritime areas and resources, making them appealing partners to China, Australia and the United States.

The states are of special geographic importance to a China seeking to extend it security and military reach in the Pacific, just as the United States has historically considered Latin America and the Caribbean in its “backyard”, a term at which the region has bristled for centuries.

As far back as 1815, US President John Adams dismissively declared: “The people of South America are the most ignorant, the most bigoted, the most superstitious of all the Roman Catholics in Christendom – [attempts to establish democracy in the region] always appeared to me as absurd as similar plans would be to establish democracies among the birds, beasts and fishes.”

With China having gained tremendous economic influence in the Americas, the United States will have to contend with the former’s reach and ambition. China has become the largest trading partner “for South America collectively (and for all of Latin America if Mexico is excluded)”.

China has also invested heavily in the Caribbean, with a strong diplomatic presence and economic investments in infrastructure and other areas, while the United States seems at times to take the region for granted.

When an ambassadorial post goes vacant, China rapidly appoints new ambassadors to Caribbean capitals. Because of the lengthy appointment process for ambassadors in the US, countries like The Bahamas have not had a US ambassador for years.

China built a new embassy in The Bahamas years ago, with the United States finally catching up with its new large complex in downtown Nassau.

Some observers often view the United States as mostly interested in a security agenda with The Bahamas, and less interested in promoting infrastructural and economic investments, for which we have at critical junctures had to turn to China for funding.

Whereas China has a long-term foreign policy and economic relations vision for the Caribbean, the United States often seems unfocused, devoid for decades of a vision for the small island developing states in the region.

Why hasn’t the United States developed a somewhat similar approach to the Caribbean, which would be happy to receive more than American tourists? The Caribbean often seems to be an afterthought and at the whim of the vagaries of American domestic politics and the interests of ideologues in Congress.

During his first year in office Joe Biden sought to recast the historic relations between the American superpower and the region. He will host the US’s 2022 Summit of the Americas in Los Angeles June 6-10.

Biden has stated of the region: “It’s not America’s backyard, everything south of the Mexican border is America’s front yard. And we’re equal people. We don’t dictate what happens in any other part of that – or this continent or the South American continent.”

This is good rhetoric but unconvincing. In a piece in Foreign Exchange, entitled, “America’s Front Yard”, historian and Associate Professor at Arizona State University, Alex Aviña offers: “Of course, the crux of the problem remains even with the so-called metaphorical upgrade. Backyard or front yard, Latin America remains subject to the US ‘homeowner’ who imagines its chauvinistic regional interests as shared universal values; a homeowner who tends to pay close attention mostly in relation to the perceived ‘infiltration’ of threatening outside forces...

“The implication, particularly when contextualised with years of ‘new Cold War with China’ rhetoric, is that the East Asian country is trespassing in an exclusive US sphere of influence deemed to be the legitimate, necessary and properly hierarchical order of things.”

Before he and his party were recently ousted in the Australian general election, former Prime Minister Scott Morrison once referred to the Pacific as Australia’s “backyard”.

The country’s new Prime Minister, Anthony Albanese, and Foreign Minister Penny Wong, who is of Asian descent, have vowed to upgrade Australia’s relations with the Pacific Island States and with the regional grouping, the Pacific Islands Forum, comprising 18 members and akin to Caricom in various aspects.

During the Chinese Foreign Minister’s tour and days after their election as Australia’s new government, Wong flew to Suva, Fiji’s capital, to meet with Prime Minister Frank Bainimarama, who said he had a “wonderful meeting” with Wong.

Mr Bainimarama met with the foreign ministers of China and Australia in the same week. He and the other Pacific Island leaders want good relationships with all of the major powers.

There is considerable diversity among the island states, including in how they approach their national interests. But they share common threats.

David Panuelo is President of the Federated States of Micronesia, with a small population of approximately 100,000. The western Pacific country has four states, Yap, Chuuk, Pohnpei and Kosrae, comprising 607 islands, with a combined land area of 271 square miles.

President Panuelo has warned his fellow regional leaders that their main interests are the global climate emergency, which is submerging their countries; the ongoing COVID-19 pandemic and the ravages on limited health care infrastructure; and the global cost of living crisis, especially for highly import-dependent countries.

He insists he does not want his country engulfed by the geopolitical rivalry of the major powers as the region faces the threats to their existence, mostly caused by these very powers.

The leaders of the small Pacific states work diligently to achieve consensus, especially in response to climate change. They are tired of being taken for granted. They want their national and collective interests to be taken more seriously. They do not simply want to be pawns in a geopolitical struggle between larger powers.

What lessons might Caribbean and Pacific small island states learn from each other in how to negotiate the evolving world order? What is the long-term strategy of The Bahamas for its foreign and diplomatic relations? What do we need to do to better promote our interests on the world stage and in collaboration with Caricom?