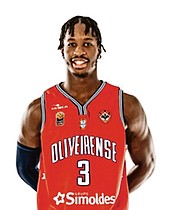 Benfica completed the regular season as the top overall seed at 24-4 and had an 8-1 run throughout the playoffs.

“There is something so special on the inside of you, that if you are willing to pay the price to bring it out, history won’t be able to ignore it,” he said.

“Lord I thank you for watching over me throughout this season and my life. I give you all the honour and glory because if it was not for you none of this would have been possible,” he added.

In 30 games this season, his third as a pro, Munnings averaged 7.4 points, 5.1 rebounds, and 1.7 assists per game while shooting 60 percent from the field and 30 percent from beyond the arc.

Benfica completed a two-game sweep of Povoa in the quarterfinal.

In game one, Munnings had five points, four rebounds and three assists in his team’s 77-59 win.

In game two, he had a perfect shooting night from the field (5-5) and finished with 16 points and eight rebounds in a 84-67 win.

In the semifinal they defeated his former club UD Oliveirense in a three-game sweep.

Munnings did not play in game three but opened the series with five points, five assists and three rebounds off the bench in an 89-72 game one win.

In game two he pulled down seven rebounds and dished three assists in a 93-80 victory.

The following year, he advanced to the LPB and averaged 12.5 points, 8.1 rebounds, and 3.3 assists per game for UD Oliveirense.

He helped lead the club to a 19-7 regular season record and quarterfinal berth.

The following offseason he made the move to Benfica.

At the national team level, Munnings recently led The Bahamas to an undefeated FIBA Basketball World Cup 2023 Americas Pre-Qualifiers performance and participated in the AmeriCup qualifiers in February.

He led The Bahamas in scoring in both tournaments as well as led the team in rebounds during the World Cup Americas Pre-Qualifiers.