The former politician died on Sunday, May 22.

The Prime Minister described Dr Newry as a trailblazer and reflected on his activism for the rights of Bahamians.

“He was quite a warrior in the fight against injustice and equality and the lack of opportunities for black Bahamians in the 50s and 60s,” Mr Davis said. 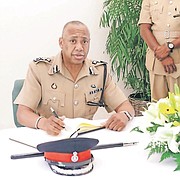 “He was quite in the forefront, quite the activist. In fact he was one of those who led a protest when John Kennedy came to The Bahamas back in 1962. He led a protest outside the gate of Lyford Cay protesting the malicious service we ordinary Bahamians were experiencing at the time. It caught the attention of John Kennedy and they eventually invited him to lunch where he expressed and laid out the concerns of the oppression that our people were having at the time. So, he was quite the trailblazer.” 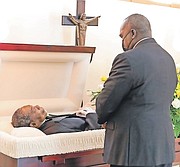 He said: “We thank God for Dr Newry that he gave himself as a physician. Someone who went into a field and an area where he helped so many of us with neurosurgery and then he took on a national position to help our country. This is what being a Bahamian is all about. That not only do you operate here, have a wonderful career here but you give back to your nation at large and then go on to be an ambassador for us.”

“We just visited his family who was present,” Mr Fernander said. “We gave condolences from the police force just to pay our last respects to Mr Newry. I must say that Mr Newry served his country well and we do appreciate his service to the country,” Mr Fernander said.

Why does this MORBID practice continue today, the gentleman has passed, and politicians are showing NO RESPENT by parading by the deceased