UNDER the cover of darkness, Anastasia and her family fled the bombing and gunfire now ravaging their homeland. No one in the car that evening could understand how they arrived at this point. When the rest of the world was saying there was a war on the horizon, every citizen in Ukraine echoed the same sentiment – it was madness drummed up by western countries to incite conflict where none existed. Russia was their ally and a country full of their brothers and sisters. But that evening, after driving for 35 hours straight with her loved ones, fleeing from enemy fire to save their lives, the new reality hit. Ill-prepared for the escape and with her feet numb, bloodied and swollen from the long drive, Anastasia became overwhelmed. Despondent, afraid and taking short, shallowed breaths, she prayed as she drove herself and her family to freedom.

On the night of February 24, Russia launched an unprovoked military attack on Ukraine. Now almost 150 days later, the war rages on. My patient, hereafter referred to as Nina, was born and raised near Kyiv, the capital of Ukraine, before moving to Vancouver, Canada for college and then ultimately settling down here in The Bahamas. Her entire family, including her mother, niece and sister (referred to as Anastasia), still lived in Ukraine until the start of the war and she shares their experience, during those harrowing first three days, today for the first time. 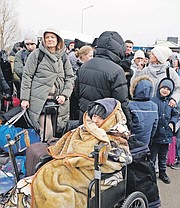 REFUGEES fleeing the war from Ukraine at the border crossing in Palanca, Moldova, on March 7. Photo: Sergei Grits/AP

By the third night of the bombing, Anastasia helped her 70-year-old mother into the car but had no time to wipe away the many tears that fell down her cheek. Her mother, a retired nurse, looked back; her voice now raspy with unspoken emotion. In enormous disbelief and minimal fanfare, she whispered goodbye to the home she grew up in. The home where she raised her children, the one that held birthday parties and saw friends visit after the sudden, tragic death of her husband, a retired orthopaedic surgeon, five years prior in a car accident. She whispered goodbye and left all of the possessions she’d collected over her lifetime, except for a torn family album, travel documents and one suitcase full of clothing.

As they sat in bumper-to-bumper traffic, cars stretched as far as their eyes could see were filled with women and children desperate to find safety as vacuum and cluster bombs decimated their surroundings. Vacuum bombs, so named because they suck the air out of the lungs of their victims, first detonate and then release a cloud of toxic chemicals into the air and then detonate again, seconds later, to ignite those chemicals and vaporize anything in their path.

There were three options to escape; going through the Polish border, the most popular route which would take three to four days, the Romanian border or the Hungarian border, which took 35 hours to cross. Each route represented a tortuous path and they drove past demolished bridges and roads and headed towards the Hungarian border. The weather outside was a biting minus 20 degrees Celsius but with the gas tank near empty, they couldn’t turn on the car heater in fear it might use the little fuel they had remaining. Many people without cars, and with no public transportation available, were forced to walk for days to get to the border and held their pets close to their chest so that the fur could provide warmth. Anastasia and Nina were most concerned about their mother who suffered with high blood pressure, heart disease and kidney problems during a time when COVID-19 had already weakened the physical and mental health of so many around them.

There was and still remains no electricity and no working phones, just the sound of explosions, helicopters and military tanks. An overwhelming atmosphere of death emanated from the hundreds of dead bodies of family, neighbours and friends lining the streets and only an army of abandoned, stray animals poured over dead bodies to find or mourn their cold corpses. Young children, never having reached puberty, are raped and murdered. Others were killed then thrown into shallow graves with their hands tied behind their backs. Homes and historical sites are ransacked and pillaged of their possessions and then destroyed with callous disregard for the owners that saved and sacrificed to build them. The putrid smell of death was everywhere.

Once they arrived at the Hungarian border, they saw buses filled with hundreds of children from orphanages and critically sick people evacuated from hospitals. Pregnant women were forced to undergo C-sections in the basement of the hospital that had to be reinforced with sandbags before they could be escorted to safety. Men and women in the ICU connected to life-saving equipment had to be disconnected and transported to more secure locations.

Nina tells me that the air was steeped in sadness and the darkness of our nightmares, once only relegated to corners, closets and below beds, has placed a chokehold over the entire country and all because of two leaders who have a bifurcated vision for the future. The long-term tremors of their discord have culminated in a seismic shift in their former allegiance and their citizens have paid the ultimate price. It is a loss that even the passage of time cannot cure and it is a point of inflection for the entire world. According to the Office of the High Commissioner for Human Rights at the United Nations, to date, over 7.2 million citizens have fled Ukraine for neighbouring countries and another eight million citizens have been internally displaced making this the greatest human crisis of our generation.

From the outset, the world has overwhelmingly stood with the citizens of Ukraine and global outrage over Russia’s aggression is omnipresent. In fact, it has united America and the European Union in a manner hitherto unseen. But as time progresses, the Ukrainians fear their allies will lose focus and abandon them even as their needs and desperation grow more pressing. They plead for help every day and voice their outrage with the passionate determination required to stack the odds in their favour; all the while knowing there is an indescribable value to their anger because, in a loud blended chorus, it can instigate change. And the patriotism, resilience and courage that the Ukrainian citizens and their President, Volodymyr Zelensky, have shown the world will be recorded in history as one of this century’s greatest testaments of humanity and survival.

On the night Nina and Anastasia’s mother left Ukraine, she imagined she’d never again in her lifetime return to the land where she was born. The tiny shop where she bought her groceries and her favorite market full of fresh fruits and vegetables, her former school, the hospital where she worked for over 30 years and the church where she was baptised and married have all been destroyed. The take-home message that Nina and Anastasia wanted everyone to know from their family’s story is that Ukrainians are fighting not just for their freedom, but for the safety of the entire world and the right to survive and co-exist in peace with their neighbours.

After reaching the Hungarian border, Anastasia drove to Budapest where she and her family slept for three days. From there they made their way to Panama and then Canada, which is where they currently reside, safe but broken from the events of the past few months. Now, scarred and labelled as a forced migrant, they start again and their story, chilling as it may be, is unfortunately one of many. May the blood sacrificed and shed by the innocent of this war provide a blanket of peace and liberty that secures the future of Ukraine and may they and the citizens of the entire world never forget that light shines brightest in the deepest dark.

• Nicknamed ‘The Prince of Podiatry’, Dr Kenneth D Kemp is the founder and medical director of Bahamas Foot and Ankle located in Caves Village, Western New Providence. He served as the deputy chairman for the Health Council for five years and he currently sits on the board of directors for the Princess Margaret Hospital Foundation in his role as co-vice-chairman.