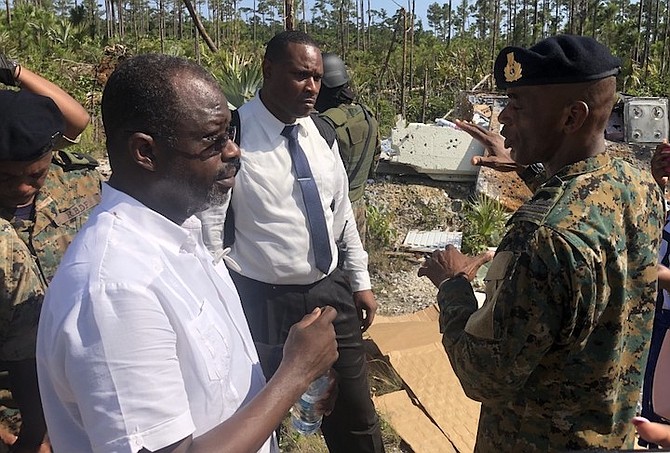 NATIONAL Security Minister Wayne Munroe (left) on the tour of deforested areas in a National Pine Forest ride along in the Carmichael Road area.

NATIONAL Security Minister Wayne Munroe announced a crackdown on people who break laws governing the use of Crown land, warning that they had 14 days to cease their illegal activities.

Mr Munroe also stressed that there will either be civil or criminal consequences for breaking environmental laws.

After touring acres of deforested areas in a National Pine Forest ride along in the Carmichael Road area and discovering that a family has been living illegally there in a school bus, National Security Minister Wayne Munroe publicly denounced the act in a press conference at the Office of the Prime Minister Friday.

Minister Munroe said that the perpetrator of the deforestation of more than 500 acres of protected land in western New Providence was a Bahamian.

This statement refuted recent claims by activist Lincoln Bain, who in videos on social media blamed Haitians for the clearing of trees and burning of coal in fields near Bacardi Road.

As such the minister warned transgressors that they had within 14 days to stop their activities before authorities launch an aggressive counter operation in the area.

He said the ultimatum took effect from Friday.

“We are giving the general public, any transgressors, a fortnight, 14 days to desist from their trespasses and their violations before operations commence,” Mr Munroe said. “We do not expect anyone to challenge the law enforcement officials that will come on these sites.

Mr Munroe said that multiple other government agencies are working to establish the network, whose steering committee is being headed by Royal Bahamas Defence Force Lt Commander Desiree Corneille.

While Corneille said an early draft of legislation has been made and sent to the Ministry of National Security and the Defence Force’s legal team, there is no clear timeline for when it will be brought before Parliament.

This new agency which will enforce laws for natural resources throughout the country will initially be staffed with between 36 to 40 officers seconded from other agencies.

While the agency is being formalised, activities related to its operations will be conducted.

Mr Munroe said the agency will be modeled after the Florida Fish and Wildlife Enforcement Unit, and that the agency should to be “stood up” in six months and fully operational in 12 months.

The Minister of National Security said that while gathering intelligence information into illegal forest activity may prove difficult, he went on to detail the extent of deforestation operations in the Bacardi area.

“Out at that site, the information coming to me and I don’t think it would be premature to state it is that the operation as it were is owned and driven by a Bahamian who has heavy equipment to clear lands, to move piles of charcoal and that he has in his employ indentured workers; is how they are described who are potential foreign nationals which is the immigration component,” Mr Munroe said.

“And so what we saw out there today isn’t a small-time operation. It’s an operation driven by somebody with land clearing equipment with the ability to hire and pay people to clear large parts of the forest. Our information, our intelligence is that it’s Bahamian owned and perhaps operated by foreign nationals as more or less indentured workers.”

Mr Munroe ended his segment of the press briefing by saying that there will be civil or criminal consequences for breaking environmental laws.

“If you do not voluntarily stop it, then we will stop you.

“If you break the law to make money, the proceeds of your crime are subject to seizure and forfeiture,” he said.

“If you burn charcoal or protected plants the resulting product in my estimation is a proceeds of crime. If you use heavy equipment to breach the law, that may be subject to seize and confiscation. This government is very serious. It does not concern us how long it’s been happening, it will stop now.”

Finally! It's amazing how long it takes government to react. I guess they need to get their cover stories straight and back dated documents in order before they pretend to do any enforcement.

Nothing has happened except some noise in the market. The proof will be what happens after 14 days.

However, is the Minister going to deal with all the KNOWN shanty towns across this Bahamas?

They gave away so many citizenships to Haitians that Lincoln might not be wrong. I don't agree with his methods but it seems to be the only way to get the authorities to take heed.

They are wrong to take and use lands that does not belong to them but they have been doing it for so .long and getting away with it so they contain to do wrong

I'm sorry but hadn't activist Comrade Lincoln Bain showed up ... It's a safe bet to wager a Ten Shillings banknote that there would not have been such a rapid after ride's publicity stunt along the deforested National Pine Forest under protective escort of the Royal Defense Force by National Security Minister Comrade Wayne Munroe. ― Yes?

So sounds like Munroe gonna arrest a few Bahamians to intimidate the rest into silence. It will soon be a crime to speak out against "potential foreign nationals."

i always say that this is the worst bunch of reporters that this country has ever had and all they do is report. If i were a reporter, when Munroe said that the main perpetrator was Bahamian, i would have immediately ask if he was of Haitian descent.

He very likely is, and that's why if he moves all of his equipment he will face no charges. Wait 3 months for things to settle, then startup in South Eleuthera. Hopping back and forth between the two parties clearly hasn't helped in over 40 years, Bahamians can't vote for Lincoln them cause Lincoln is "too loud" right? They prefer leaders who sit quietly and watch the invasion take place over social media.

It's said that it could be as high as 50% of (all) colony's land deeds that are but an illusion! ...
Wait, this is but a widow's peak at the intel renumbering in high thousands of land squatters encroaching on not only Crown land, including Crown shoreline and submerged Crown. ... But private ownerships properties as well ... And it's not only a family forced into living illegally in a parked school bus. ... The players come from a rainbow of offenders including lawyers, accountants, realtors, politicians, church people, bankers and the moneyed.... Why, my own family is fighting a money taxing battle to reclaim some hundreds acres of generational land. ― Yes?

This can not be about that. Nothing is going to happen especially if it is not dealing with whatever this is truly about.

The people in the bus seems to believe they were right , but they are wrong suppose more people do the same , what a great mess there will be