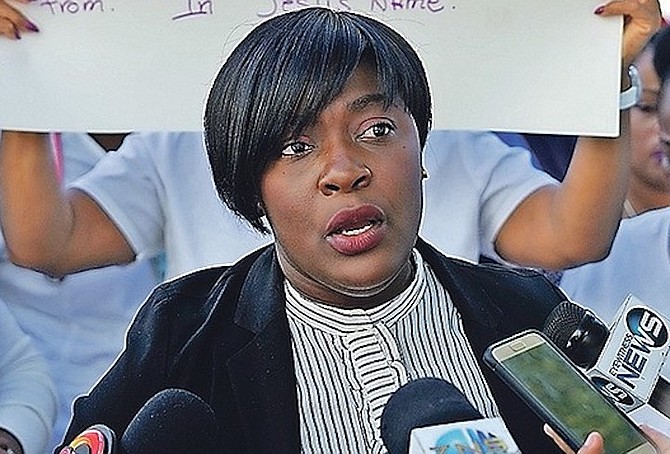 BAHAMAS Nurses Union president Amancha Williams says patience is wearing thin among nurses who are incensed by a lack of urgency by the government to finalise an industrial agreement.

While the union president praised the Public Hospital’s Authority for joining the union at the table to discuss their issues, which has led to the agreement being processed on their end, she said the Department of Public Health “is nowhere in the running”.

“That speaks from (Minister of Health and Wellness) Dr Darville’s side,” Ms Williams said. “PHA is an authority that still has to go back to the government. PHA is starting to activate.

“If you say you come to make it better, then show the people you mean better.”

Her comments come as the BNU awaits approval of a strike certificate after holding a poll earlier this month. The BNU president said 347 nurses voted in favour of striking while only two voted against the move.

She continued: “The patience is very thin. If you see 300 plus people come to the poll and the majority voted is from PMH, your capital where every plane that flies out with an emergency patient has to come to PMH what does that say?

“You see the red flags. The people are tired. Don’t wait until things happen.

“I don’t know why the government likes to wait until the last leg when the people are on the street to do something about a matter. No, start attending to the matters now.”

Ms Williams expressed some disappointment at the number of unresolved industrial agreements among, not just her union, but others in the country.

“I am disappointed in the actual finalisation of these industrial agreements, not just for my union but the others as well and why do they take so long in investing,” she said.

“My thing is I believe that no government wants to sign an industrial agreement because at the end of the day it is taking the monies and increasing the salaries of the workers, but you can’t ever lose.

“If you get $3m you must give the worker $1m. It seems to be that they have a problem or they realise that if they sign it they have to stick to it.

“When you don’t sign an industrial agreement that is what you think of your workers, nothing.”