PETER YOUNG: This is more than a friendly talking shop but somewhere real work is done 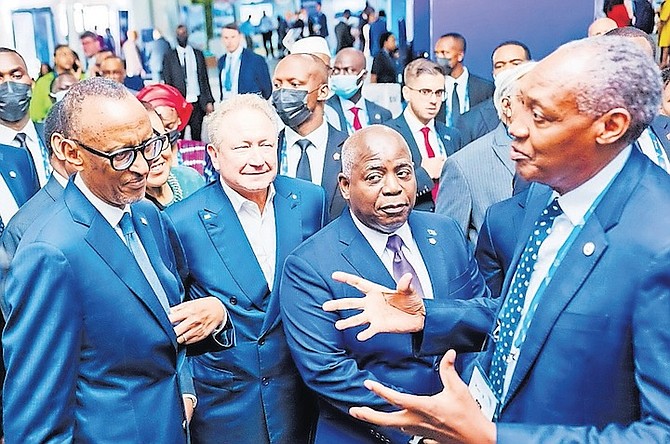 Determining different and interesting topics to write about in this column can be challenging. But today it was a simple task to decide to concentrate on the week-long Commonwealth Heads of Government Meeting, known as CHOGM, in the Rwandan capital Kigali which ended last Sunday.

This was an important event in the international calendar because it represents effective collaboration and mutual assistance on a massively varied scale that is of significant benefit to its member countries. It was the first in-person meeting of Commonwealth leaders since 2018 because the biennial CHOGM planned for 2020 was cancelled as a result of COVID restrictions. So, last week’s event assumed even greater significance than its intrinsic importance as a gathering of the leaders of 54 countries with their 2.5 billion citizens making up a third of the global population and with an estimated collective GDP of about $14 trillion.

Readers of The Tribune will have seen the excellent Letter to the Editor last week from British High Commissioner Sarah Dickson setting the scene. She also wrote about the then-Foreign Secretary, Boris Johnson, at the time of CHOGM in London in 2018 ordering the re-opening of the High Commission in Nassau. Many here at the time believed this was misguidedly withdrawn when the Blair government reportedly closed more than 20 overseas posts in 2005, purportedly to save money. She also drew attention, in particular, to the importance of the Commonwealth to both The Bahamas and Britain alike and to their working together on a range of issues, as well as to each of its other member countries – not least because of the system of consensus in reaching decisions so that the voices of the smallest count as much as those of the organisation’s larger countries.

The Tribune carried as well the same day a comprehensive report by columnist Alicia Wallace about various official events which took place before the high-level meetings; for example, the Commonwealth People’s Forum and the separate Women’s and Youth Forum. There was also a Business Forum meeting among other formal gatherings.

In the absence of The Queen, who is, of course, Head of the Commonwealth, Prince Charles presided over this CHOGM. Some in the UK press seemed gleefully to be anticipating that his visit would be overshadowed by a row over reported remarks he had made privately criticising the UK government’s scheme to send asylum seekers to Rwanda. But such potential embarrassment was avoided. Before the conference, however, parts of the press questioned the suitability of Kigali as a venue because of Rwanda’s past human rights record. At the time Rwanda became a member in 2009, its repressive regime was considered by some not to meet Commonwealth standards – and it is claimed that its foreign and domestic policies will now come under closer scrutiny because the CHOGM host country becomes the Commonwealth’s chair-in-office until the next meeting.

There has also been press criticism of the Commonwealth’s alleged lack of concerted action on the important issues facing the world. But, in my view, that is to misunderstand fundamentally its nature. It is not a treaty-based organisation and its decisions on a large range of issues are not legally enforceable.

The Commonwealth is a voluntary association of nations - with common values, historical links, a shared language, similar legal systems and close trade and economic ties - seeking consensus on an enormous variety of issues. These include democracy, human rights and good governance, investment and trade, debt and inequality, climate change, empowering young people through improved education and strengthening its existing network of technical and professional associations including cooperation and exchanges. It also, of course, deals with health issues – for example, specifically at this CHOGM, a commitment to work towards the elimination of cervical cancer, to ensure access to good quality eye care and a pledging of funds to fight against malaria and neglected tropical diseases.

Nonetheless, since such work is often achieved behind the scenes without drama and controversy, there is all too often media indifference because it is not deemed to be newsworthy and does not grab the headlines. Even CHOGMs themselves - the Kigali gathering comprised high-level events and fora involving around 5,000 delegates discussing some of the most important issues of the day - are seen by some cynics as strong on pomp and rigmarole but not amounting to much more than warm words and encouragement.

Such criticism is surely both grossly uninformed and wholly unjustified. The importance and value of the Commonwealth should never be underestimated, and it can take firm and decisive action when required. For example, Zimbabwe was suspended from the organisation in 2002 because of its failures in respect of human rights and, at the CHOGM held here in Nassau in 1985, Commonwealth leaders took a firm line in agreeing the imposition of sanctions against apartheid South Africa.

As far as The Bahamas is concerned, it was noteworthy that, in his impressive address to the Business Forum in Kigali, Prime Minister  Brave Davis emphasised the threat of global warming to our archipelago along the lines of his much acclaimed speech at COP26, the climate change conference in Glasgow in November, 2021. As he repeated so eloquently last week, those countries which are the least responsible for carbon emissions that drive climate change are suffering the greatest negative impact. Stressing that eighty per cent of The Bahamas’ land lies less than 1.5 metres above sea level so is vulnerable to flooding caused by rises in sea levels along with storm surges due to hurricanes, he said that “we are at the mercy of forces far beyond our control”. Thus, The Bahamas needed partners to secure the required funding and investment and technical support for new infrastructure – and it will be interesting to learn the extent to which this can be achieved through Commonwealth co-operation.

Clearly, Commonwealth nations believe they benefit from membership since it is a voluntary association of like-minded countries which is not confined to former British colonies. Other countries which reject authoritarianism and tyranny are seeking to join. Mozambique and Rwanda are already part of it and Togo and Gabon are said to be on the path to membership. There can be no doubt that as a well-functioning organisation it continues to be a force for global public good and an instrument for positive change on a huge scale. Long may it thrive.

When times are hard...

According to reports, one of the consequences arising from the Ukraine war is the disruption of Russian gas supplies to Europe. Despite European efforts to scale back dependence on this gas, Russia still provides some 45 percent of the European Union’s imports through natural gas pipelines which cross Ukraine from Russia.

The West started importing large amounts of gas from the then-Soviet Union in the late 1980s. It is said Russia does not want to cut off this supply of gas completely because it represents an important revenue stream. But in response to Western sanctions it has imposed its own sanctions on the European subsidiaries of its main distributor, Gazprom, and has reduced levels of supply. This has included Germany while supplies to Bulgaria and Poland have been stopped completely. Supply has also been affected by war damage to the pipelines in Ukraine.

While Germany and others are looking for alternative suppliers, it is reported Germany, in particular, is now concerned that the reduced levels are resulting in severe shortages and this will force it to fire up coal plants to generate electricity. It plans to limit use of natural gas for electricity production -- in order to build up its reserves in anticipation of higher demand during the coming winter – and burn more coal for a “transitional period”. Alarm bells are also ringing in other European capitals. Italy, Austria, Slovakia and the Netherlands are reporting supply reductions and have indicated that coal-fired plants could be used to compensate for these cuts ahead of the winter.

In the context of climate change and global warming, this is not good news. Only last November at COP26 it was being said with certainty that “the end of coal is in sight”. Forty countries – not including the US or China – pledged to phase out coal as the dirtiest fossil fuel. Environmentalists say coal is the most polluting way of producing energy. It is the single biggest source of planet-warming carbon dioxide emissions worldwide and therefore an important target for replacement in transition to renewable alternatives. Ending its use was a major issue at the Glasgow summit.

It seems inevitable from all this that reliance on coal will continue in the foreseeable future. The meeting of targets agreed at COP26 for phasing out fossil fuels will at best be delayed and could never be achieved. A report in the UK’s Guardian newspaper warns China is planning increased production of coal to stave off more blackouts as early summer heatwaves have prompted record electricity usage. This will hamper China’s ability to meet its promises on emissions reductions. The country is a major investor in wind and solar power but still relies heavily on coal-fired power.

In such circumstances, the assistance required by Small Island Developing States including The Bahamas for financing and building infrastructure to protect low-lying areas from rising sea levels has become, arguably, all the more urgent. So, public demand to know what action the government is taking may well increase - in particular, as noted in a separate piece on this page about last week’s CHOGM in Rwanda, what is being done in the Commonwealth context.

Having written only two weeks ago about the political fortunes of Prime Minister Boris Johnson, I hesitate to return to the subject today. But the issue of his failing leadership has broadened into a debate about a Britain that is on the wrong path and, in so many ways, is not functioning properly as a country. To name just some of the problems: the economy, inflation and the cost of living crisis, crime, immigration, growing pressure on the National Health Service, overcrowding and chaos at airports and continuing problems over Brexit. To make matters worse, there is now the danger of a return to the prolonged industrial unrest of the 1970s. To many, the country now seems rudderless with a leader who lacks the determination, resolution and capacity to get it back on track.

Whether or not this is really the case, perhaps the outcome of two by-elections last week was a reflection of the public perception that things are going wrong, with voters blaming a deeply unpopular Conservative government which is lacking purpose, competence and coherence. In both polls the Tories suffered shattering defeats with massive swings to the opposition Labour and Liberal Democrat parties.

Many say this was nothing short of a humiliation for Mr Johnson who was already a battered figure, further undermined by his own MPs, and is now limping from one crisis to another. While he continues to contribute effectively on the international stage – on Ukraine, CHOGM, the G7 and the current NATO summit – his domestic political prospects have been severely damaged.

There is no space today to examine all this further. But these are troubled times. So, for merciful relief as I write this column, what a joy it is to see the start of Wimbledon in all its glory and to look forward to watching two weeks of the best that tennis offers – in the hope as usual, of course, that the notoriously unreliable English weather does not spoil everything. But thank goodness, at least, for the Centre Court roof!

• Peter Young OBE is a retired career diplomat living in Nassau. He is a former British High Commissioner to The Bahamas.