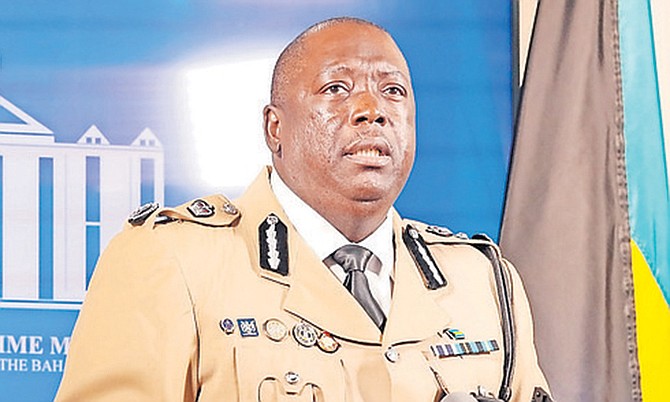 THE Royal Bahamas Police Force has pinpointed three US states as points of origin for illegal guns that are turning up in The Bahamas.

According to Police Commissioner Paul Rolle, “literally all of the illegal weapons that we have recovered are traced back to” either Florida, Atlanta or Texas.

Despite best efforts to get a hold of the problem, Mr Rolle admitted the gun situation is a revolving door because “as you get them, the next shipment of guns is there”.

A part of the issue has come down to some Bahamians engaging in straw purchasing to acquire the weapons. A straw purchase is an illegal act in which a gun is bought by one person on behalf of someone else who is legally unable to make the purchase themselves.

Given that the majority of murders in the country are the result of gun violence, Mr Rolle said a major focus of his administration has been to crack down on illegal guns.

In 2021 the police discovered or seized in The Bahamas 277 firearms.

The police chief contended the issue does not solely lie with the police.

“We are doing our job,” Mr Rolle said of the fight against gun trafficking in a reflection of his stint as Commissioner of Police, a post he took in 2020. He will retire on July 5.

“Are we going to get all the guns? No, but the frustrating thing is as soon as you get them, the next shipment of guns are there. So, it’s an ongoing thing.

“That’s not a police responsibility. Someone else is responsible to interdict those doggone guns coming into this country. Not the police. But, everybody is saying ‘well, what is the police doing’.

“I don’t hear anybody blaming anyone else. Nobody is holding anyone else to account, but if we are getting 300 illegal guns off the street today the police are certainly doing their jobs. How are these guns getting in here?

“Are you saying that the police are supposed to stop these guns from getting in here? Certainly we have a role to play, but we don’t deal with borders. These things are being shipped in here somehow. Maybe we need to have a conversation with some of the other agencies and let them tell us what they are doing to mitigate and prevent.”

He continued: “What we have done in my time is we trace all of our firearms and I could give the history on the gun. I could safely say that literally all of the illegal weapons that we have recovered are traced back to the United States.

“Either in Florida, Texas or Atlanta. They are the hotspots where we tend to find persons purchasing guns and they smuggle them into The Bahamas.

“So, what I’ve done is we have partnered with other agencies in the United States and we have been targeting those persons because you see when you do the trace, some of the same names are showing up.”

Based on the information that turns up in these traces, Mr Rolle said investigators have been able to narrow down some gun traffickers.

It is an issue that Prime Minister Philip “Brave” Davis said he would raise at the Summit of the Americas in Los Angeles, California earlier this month.

Mr Rolle went on to note the measures that allies in the US have taken to assist in The Bahamas’ fight.

“You see a lot of the discussion going on now and even the prime minister is saying that we need to do more. So, what they are doing now is making it a little more difficult for youngsters to get guns because they have been having their problems with these mass shootings.

“That’s one issue, but the issue for us in many instances are the straw purchases. So, you go to the states and you can’t buy but your friend lives there and you say ‘man I need these guns. Let’s go to the pawn shop and gun show’ and he could purchase the gun because you can’t and then he gives it to you.

“What we have been asking them to do is make it a little more difficult for him to go and buy the gun in the first place.

“So, he now has to go and submit documents. He then has to wait. The waiting period allows the authorities in the states to check him and find out who he is. We said you can only purchase two in a month’s time, but we notice that this fella has been buying guns regularly, Why is he buying these guns? I am saying that is a part of the investigation to help mitigate.

“It’s not only The Bahamas, you know? It’s the Caribbean. All of these countries are doing that. So, it’s an enterprising thing.”

He also said: “Yes, I intend to raise that in the margins whereas it’s not a subject, clearly equitable growth and prosperity and strong and inclusive democracies are undermined and compromised by violence and gun violence in any democracy and so to have a safe and secure country this issue of gun violence has to come under control and we know where the guns come from.”

The comments came after National Security Minister Wayne Munroe told Parliament there was an 18 percent overall rise in crime in The Bahamas.

Homicides also increased by 26 percent, the Free Town MP said at the time.

Considering how troublesome the state department is, they allowed him to say this, and without reprisal?

When did Atlanta become a state? Did I miss something?

A knowledge of geography is not a prerequisite in order to rise in the royal Bahamas police farce, or so it seems.

Instead of doing intel on HERB, do intel on guns which are more deadly.

Atlanta (/ætˈlæntə/ at-LAN-tə) is the capital and most populous city of the U.S. state of Georgia. With a population of 498,715 living within the city limits, it is the eighth-most populous city in the Southeast. Well to be fair population wise it trumps Bahamas Land, yes?