Bahamian livelihoods could be affected if coral infection left untreated 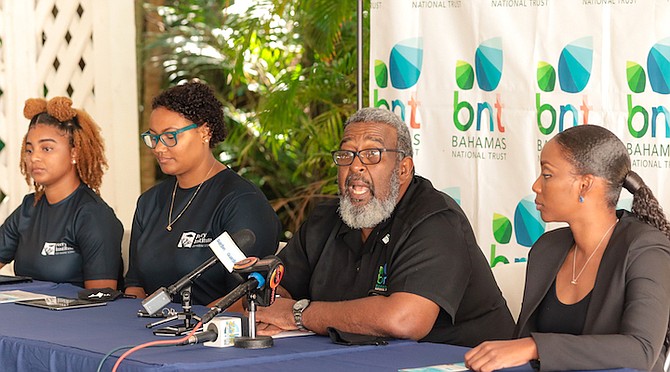 LOCAL environmentalists on Friday doubled down on warnings about the threat of stony coral tissue loss disease, noting Bahamian livelihoods could be affected if the fast-spreading infection remains left untreated.

Their warnings came during a press conference held at the Bahamas National Trust on Friday, where representatives from BNT, Waterkeepers Bahamas and Perry Institute for Marine Resources (PIMS) spoke about the disease’s impact. 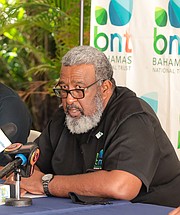 He also likened it to an “underwater COVID pandemic” for coral reefs, noting its contagiousness and deadliness as similar to that of the novel coronavirus.

“This disease is unlike anything we’ve ever seen,” he said at Friday's press conference. “Some of y’all may have heard about coral bleaching…but this monster is different.

Coral before and after infection.

“This monster is a cancer. It’s the underwater COVID pandemic for coral reefs and so we are very, very concerned as a community, and we are prepared to do what we can to get a better understanding of what is happening with this killer monster disease.”

Mr Carey added: “If we don’t find a way to reverse the rapid decline of our coral reefs, then it is going to impact the average Bahamian because you’re going to be going to Potter’s Cay to buy tilapia grown in a fish farm somewhere in a tank. That’s the reality. Fish need healthy ecosystems and if we’re going to continue to enjoy fish then we’re going to do what we can to arrest this monster.” 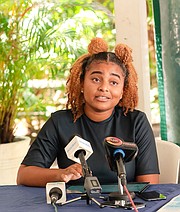 Meanwhile, noting that all hands are needed to combat the issue, Mr Carey called for the conservation and scientific community and the wider Bahamian public to join hands with officials and take action.

He said: “We are prepared to work with the scientific community, the conservation community and very importantly the government of The Bahamas to try and get a handle on what is happening with this monster.

“The government did some time ago put together a taskforce that included some of us from this side of the discussion as well as people from the Department of Marine Resources and the Department of Environmental Planning and Protection, but then we couldn’t move forward because things stalled and they stalled because we had issues getting scientific research permits because of new ABS legislation that was putting some stumbling blocks in the way of getting people — the scientists — in the water and getting permits.”

Mr Carey also told reporters on Friday he was pleased to report that the government has agreed to provide agencies with the necessary permits to resume their underwater research in the coming days.

He said the move would allow for environmental groups to mobilise their teams to assess damaged coral reefs and help treat them. 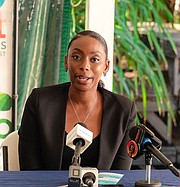 “We don’t want to see devastation to the point where we cannot correct what is happening. We want to be able to go out there and now and do as much as we can to at least remedy the disease so we’re able to at least save what we have,” said Rashema Ingraham of Waterkeepers Bahamas.

“It’s really up to us as environmentalists and activists and as NGOs, government officials and community leaders and people of The Bahamas to see the need to work to find solutions.”

SCTLD, a bacteria, was first found in corals off Miami in 2014 and detected in The Bahamas several years later. 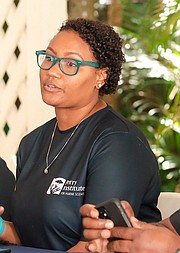 Currently, there is no cure for the disease, although its spread can be slowed or stopped when Amoxicillin, an antibiotic, is applied strategically to affected reef systems along with other measures.

"We have been raising funds to help address this disease and give treatment to it and we also raise funds to create a coral restoration facility," PIMS representative Lashanti Jupp said. "We submitted a treatment plan that we created and that was done in April 2021. "We’re hoping to provide additional support to the government and other non-governmental agencies that are also working in the marine conservation sphere as we know that this is a group effort. ”

While it is not clear how many reefs in The Bahamas have been affected by the disease to date, Rochelle Newbold, director of environmental planning and protection, told reporters in December that 90 percent of coral reefs off Grand Bahama alone have already been devastated by SCTLD.

and everyone is quiet. where are all the pyndits?

Another in a long line of badly written and nonconstructive comments on this website.

The chief pyndit and intellectual giant has arrived!

And that's the best you can do?! I gather you're not a bigger supporter of the new Blue Deal. LOL

It would be a 'big' supporter not 'bigger' and I am a supporter of it. What evidence was there from my remarks for you to 'gather' that ?

The 242 coral reefs have taken a beating in the past 30 years from hurricanes, bleach, boat anchors, marina excavation, crawfish condos, poachers, lionfish, global warming and now this bacteria.

This one is very serious and threatens our fisheries like never before. Hope Clay gives this matter TOP PRIORITY

Holy smokes! I knew it was bad, but not this bad. It can advance one mile each month... wow! That is terrible and scary news. Damn.

Over 30 years ago there were problems in Florida waters. Fish are diseased. Problems have been reported for at least 30 yrs. TURKEY POINT nuclear power station, situated on the sea just south of Miami, has been leaking for decades!!!

Fishermen in Freeport have long noted that ever since the cruise ships come to dry dock and pump out their stagnant bilge ballast they have seen coral reef deterioration!! Some excellent science clearly shows us that not only do we need to look towards the root of problems rather than trying a jerry-rig fix-it, we should also take very seriously the problem of antibiotic resistance.