‘SMALL STATES NEED TO FIGHT TOGETHER’: Brave warns we should join forces with regional nations on climate fight 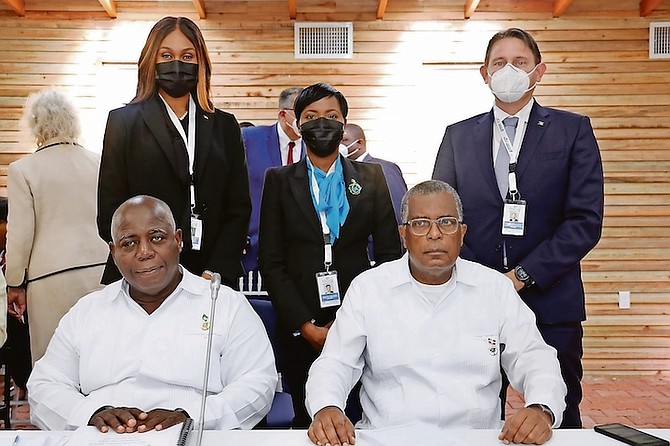 AS he appealed for countries in the region to come together to combat climate change, Prime Minister Philip “Brave” Davis admitted the COVID-19 pandemic highlighted the “humbling” realisation that The Bahamas’ interests may be more aligned with other small island developing states than some of its larger allies.

Mr Davis was proposing how countries in the region could band together and create stronger ties to fight the climate challenge at the CARICOM-SICA Summit.

Yesterday was the final day of meetings with regional heads in San Pedro, Belize.

“As a regional community, what can we do, beyond hoping that our friends will spring into action, beyond waiting for the inevitable to hit us?”

“ What leadership can we provide? Colleagues as we are not the major carbon emitters or the wealthy carbon-emitting beneficiaries, there will always be limitations around what we can do. However, The Bahamas believes that it is possible to be an active and driving part of the solution. The first step is to take the first step,” Mr Davis said.

“We recognise that we face a global phenomenon brought on by global causes and need an international effort. Yet when it comes to the region, we are still acting individually.

“I do not underestimate the challenges of stepping up our levels of regional cooperation, but leadership requires us to try, try and try again.

“My government still has some way to go in arguing to the Bahamian people that we must look south and north. We are grateful to our friends and allies for all that they do.

“But the experience of the COVID-19 pandemic brought into sharp and humbling focus that our self-interest may well be more fully-aligned with those who live like us: small island developing states; small economies with narrow economic bases; and small populations whose voices already resound loudly on the world stage, but not loudly enough to carry the argument.”

He continued: “Colleagues, we are experiencing the same hurricanes, the same rising sea levels, the same threats to our tourism industries.

“We intend to push an agenda that includes a strong focus on solutions hoping that our common interests will help us narrow our ties and strengthen our bonds. We are already exploring several paths forward which we believe offer opportunities for regional and international cooperation.

“If we can come together to address the biggest, most existential threat facing humanity, then surely we can overcome some of the other obstacles, which have historically prevented the region from working together more closely and more productively.”

Mr Davis said as a new Prime Minister, having taken office following the September 16 general election, he came to the table with no agenda other than the hand of friendship, cooperation and peace in our region and hemisphere.

Looks like Davis is getting the Pindling lazy eye - or has he always had that? And what happened to Mitchell? Looks like he's sitting across from his high school principal.

While the following quote was in reference to World War 2, Churchill's words apply to the threat posed by climate change to humankind and the planet's ecological health generally:

"Owing to past neglect, in the face of the plainest warnings, we have now entered upon a period of danger … The era of procrastination, of half-measures, of soothing and baffling expedients, of delays, is coming to its close. In its place we are entering a period of consequences … We cannot avoid this period; we are in it now." Winston Churchill, Churchill Speaks: 1897-1963.

The Bahamas needs a homegrown Churchill (in terms of his ability to provide guidance and inspiration and rally support), our own Mia Mottley. No one of the equivalent stature appears to exist in either the PLP's or the FNM's leadership ranks.

We also need a "climate czar" to help us clearly understand the risks confronting our country, especially as they apply to today's children and future generations, and to help guide us through effective mitigation and adaptation strategies. Not a political appointee. Not a bureaucrat. A homegrown expert who understands both the challenges posed by climate change and our people. A person who values both scientific evidence and the experiences of "ordinary" citizens in terms of understanding how the country is already being impacted by rising and warming seas, changing weather patterns, changing bird migration, etc... Dr. Adelle Thomas???

Well that's was what I expected from the PLP

Climate activists have only one goal; kill fossil fuel exploration and use. The Europeans were conned into supporting this objective. The Russians have the same goal because it increases the need and price of Russian oil & gas and increases the control on European countries. Russia rules because of the activists! Our PM has stopped oil& gas exploration on the Bahamas even though we have a $12 billion deficit. The result is an explosion in gas prices here and in the US. Are the activists for us or against us?

Deny science. Deny consequences. Deny responsibility. Exploit logical fallacies and rely on fake experts. What do you end up with? Illogical conspiracy theories and ostrich-like behavior.

FYI: The quantities of petroleum that might exist in Bahamian territorial waters are miniscule compared to other KNOWN reserves, including those recently being exploited off Guyana. It's comparable to The Bahamas' population: ~0.005% of the global total.

Dear zemitou, "Miniscule petroleum reserves below Bahamas territorial waters" is incorrect!. This geophysicist knows that there is scientific evidence that there are HUGE quantities of oil and gas at depth below Bahamas The development of this resource is probably the only way Bahamas can deal with its $12 billion national debt!

Hmm. Perhaps you should confer with Bahamas Petroleum Company because, while their tests confirmed the presence of hydrocarbons in The Bahamas, the company concluded in 2021 that they are not commercially viable. This is in line with the findings of other exploratory ventures beginning in the 1940s.

These two corrupt and incompetent bozos (Davis and Mitchell) are hoping their climate gibberish distracts us from all the pain most Bahamians are now experiencing as a result of decades of our country being raped, pillaged and plundered by the greedy political ruling class while they grossly mismanaged every aspect of our economy.

The entire focus on climate change is silly. I was of the opinion that they were already united on climate change. Why would he have to go there to speak on something they are already united on. We need leaders who are serious about finding solutions to things we can actually solve. Our government need to focus on developing tangible industries for the future. Not focusing on things we already agree on regionally and have no power to change on our own.

Another half a million dollars spent on globetrotting. When will corrupt bwave them get to doing some real work for Bahamians? By the way Ginger needs a new hair style now

What a bunch of crap and show of ignorance by government yet again! Start with removing all duties on solar and remove the red rape BPL has for solar net metering.

These are tangible tings the government could do right now, rather than wasting money flying off to silly meetings to make silly statements.

Please stop this climate change hysteria, it only helps the Russians.

'Hysteria' says the world renowned climatologist. Another science denier and most probably anti-vaxxer Im sure. There is a consensus of opinion held by 92% of the WORLD'S scientists that CC is real and man made. Yet we have morons like you filling social media with all kinds of false information.

1pnewman. Don't waste your time. With a name like ColumbusPillow, probably believes Columbus discovered The Bahamas despite Columbus himself documenting his encounter with people already living in these islands.

So the two olds heads sitting down ignoring their own ministry of health mask protocols, and the ones standing up wearing the mask? Wow!

LOL. That Wuhan virus only infects the foolish plebes they so cruelly rule over.