What part can Bahamas play in sanctions against Russia? 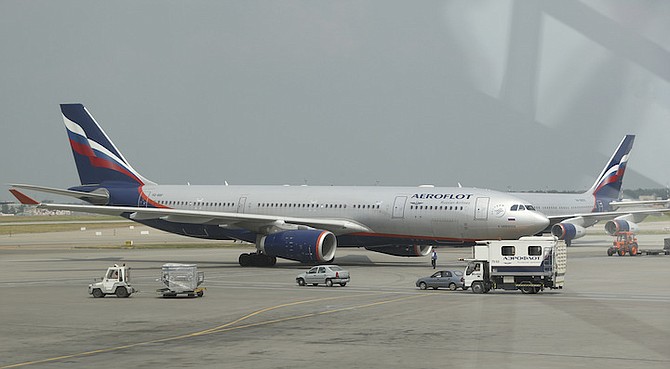 THE closure of American airspace to Russian planes increases the likelihood that The Bahamas’ airspace will be used as an alternative route for Russian aircraft, according to former director of aviation Charles Beneby.

On the other hand, a move by The Bahamas to limit Russian access to its financial system will have no impact because sanctions have already been implemented by the correspondent banking institutions on which this country is reliant, according to Gowon Bowe, chief executive officer of the Fidelity Group of Companies.

The US Embassy has urged The Bahamas to limit Russia’s access to the Bahamian financial system and to restrict this country’s airspace to Russian aircrafts. That plea came after Russia invaded Ukraine in a move that has drawn condemnation from countries around the world, including The Bahamas.

The United States, the European Union, the United Kingdom, Canada and others have begun sanctioning Russian oligarchs, freezing and seizing their assets in response to Russia’s invasion, which they insist was unprovoked.

While Russian involvement in the local financial system is already low, according to Mr Bowe, Russian planes may now see The Bahamas’ airspace as an opportunity after the US and Canada closed their territory to them.

“When Russian planes are going into Cuba, which they often do,” Mr Beneby said, “they could very well fly in our airspace. In normal times, we do get a fair amount of European aircraft that fly through what has now been established as Bahamian territorial airspace.

“Theoretically, the route is westbound, depending on what the wind is doing, over Greenland, and then turning down. But if the Americans are shutting their airspace to them, there’s really no place to go. If they want to go to Havana or some place in Cuba, they would have to take a more easterly route which would, I think, definitely put them in our airspace.

“I wouldn’t be surprised if an Aeroflot plane popped up, I’ve seen it all the time in the night-time and that’s the best time for those kinds of flights to operate,” Mr Beneby said.

Mr Bowe, meanwhile, said the government could get details about the involvement of Russian oligarchs in the country’s financial system if it chooses to.

“The government would have details relative to it because of our new Register of Beneficial Owners law, the ROBO Act, and therefore all of the financial corporate service providers will have, in the secure database, that information,” he said.

“As it relates to them being a major player in our financial service system, they traditionally have not (been)... particularly the Russian oligarchs because a lot of their wealth has been in the various Russian monopolies, the oil industries, etc. A lot of them have tended to have their wealth in the major Western territories, the UK, the US and they have started buying assets like football clubs.

“Most of the Bahamian financial system is wealth management so from that perspective it would be looking more into asset wealth so wherever they domiciled their companies.

“Certainly as it relates to the IBCs and trusts and elements of that nature there isn’t any significant concentration that has been observed, certainly not since the Russian oligarchs became what they are known as in the early 2000s. Since that time, are there Russian assets here? I’m pretty certain there will be because there would be a number of them in general. Are they the oligarchs that have been actually sanctioned? I don’t know,” Mr Bowe said.

Mr Bowe said Bahamian banks, both private and commercial ones, rely on bank systems based out of the US, UK, Canada and others, countries that have already sanctioned Russian oligarchs.

“All of our correspondent banks have already advised that there will be no significant transactions facilitated or enabled and so The Bahamas financial system isn’t one that I will say drives other systems, we rely on other systems so the truth of the matter is once the US, Canada and the UK have imposed sanctions, it limits the ability to move the funds and The Bahamas will simply be compliant with that,” Mr Bowe said.

“What I would say is while the UN Security Council has been slow in terms of the multilateral sanctions, the US, Canada and the UK, Australia and others, the European Union have blocked and issued the sanctions and because The Bahamas does not work outside of those traditional systems, the reality is those sanctions have already been imposed. The Bahamas’ endorsement would be purely a show and tell as opposed to adding any punitive imposition on the Russian oligarchs.”

Last week, Prime Minister Philip “Brave” Davis said CARICOM is awaiting a decision from the United Nations Security Council before taking a position on whether member states should impose sanctions on Russia.

Mr Davis spoke from Belize, where he was attending CARICOM meetings.

He returned to the country on Friday.

First I doubt that there will be many flights, as Russian airlines have cancelled all international flights and their planes are being re-possessed by leasing companies. In any case best would be to remain neutral, but it will be difficult not to give in to US pressures. Maybe the government will be smart enough to negotiate a financial support package to counteract the negative effects of the sanctions?

De closure of we UK Colony's airspace to Russian planes was quickie a no, no for Guardian's De Revolution with Mr. Carmichael but the host was also as quick to push pedal in blocking his listeners' dear Comrade Sparky from his show's air space,** ― Yes?

Knowing our brainless corrupt politician's, they will go right ahead bending to pressure from the US to place sanctions on Russia; they are too ignorant to stay neutral in geo- political affairs. Thank God we have no world class economy or military, gold or large oil reserves they would have painted the bahamas as enemies and invade us too. Just ask Japan what happened to them in the 80's when they had the second largest economy in the world ask; Haiti, Cuba , Mexico, Panama, Syria, Iraq, Libya, Congo, Afganistan an the list goes on who invaded them. It's not our government place to put sanctions on any nation, the government needs worry about all the debt they put us in an the corruption within it. We arent a warmonger nation we are a peaceful nation what needs to mind our own business. The government want sanction another nation an never produce a balance budget yet in the history of this country don't make me laugh. Our government should sanction itself from borrowing money how about that?

There are very wealthy Russians that hold multiple passports including Bahamian, and have donated to both Bahamian political parties and hold ownership in local companies and own various properties. Can the papers please interview someone other than Mr. Bowe..sigh.

The Bahamas need to understand its position. We have no reason to get in their situation. We don't even know the true story behind the invasion. We need to stop trying to look important and mind our own business. Americans look like they love to troll these weak Bahamian leaders for fun.

But Fweddy Boy Mitchell is so very much looking forward to voicing his diplomatic views on Putin in many countries around the world. He has an enormous travel budget at our great expense that he simply must use or lose.

Last time I checked the Bahamas doesn't have any fighter jets so if Russians choose to fly over there isn't anything you could do about it anyway.

And that is why you have to pick a side at times like this, UK & USA v's Russia (and by default China) China and India will be buying a lot of Russian commodities.

Be warned Comrade Mr. Putin!
Being we UK Colony's national carrier are financially funded by duh government, it is constitutionally possible for every aircraft within duh fleet to be weaponized, along with pilots, air and ground crews operates scheduled services to 32 domestic and regional destinations in the Caribbean and the United States from its base at Lynden Pindling International Airport to be sworn into service as protectors of we colony's airspace, And duh RAF, still has its residual commitments to protect over we/her** colony, ― Yes?

Does it matter that the US actually control the airspace over the Bahamas excepting Freeport and Nassau?

You mean to tell me the very corrupt and grossly incompetent team of Davis and Cooper can't 'sell' the rights to our country's airspace to Communist Red China and have them and their favoured cronies pocket a generous chunk of the 'sale' proceeds!

Now learning that is really gonna disappoint both Davis and Cooper given that government is challenged to find buyers of government issued treasury instruments and they're desperately lookin' to 'sell' to foreign interests any and erryting that ain't tighted fastened down in our country today. The mighted corrupt among us are now reaping what they've sown. LOL

Russia is Not as strong as they pretend to be.

And The Bahamas needs to make a definitive stance against Russia, we have to chose a side, and as we are next door to the USA & they always helps us after a Hurricane I think they would be the wisest choice for allies. And The USA is in NATO and sided with The UK both have immense military forces. China has a lot of interests in Cuba and in Russia, they also have Baha Mar and The Point, an Embassy here and other investments. So we also need to let them know where we stand, they have wavered on the sidelines and benefiting from all the unrest in Russia.

We need to stop Russian, investments in The Bahamian banks Including Crypto currency's, their private airplanes and yachts need to be confiscated and stopped operating in our seas and sky. America will have to assist us with keeping our borders safe.

We do literally zero trade with Russia and have maybe a handful of Russian expats here. On top of that, we have a handful of Bahamian banks operating in this country, most are of foreign origin and are already operating under the sanctions. Adding "sanctions" would literally do nothing.

Unfortunately, modern society is all flash and no substance. Exactly why we are a failed nation today.