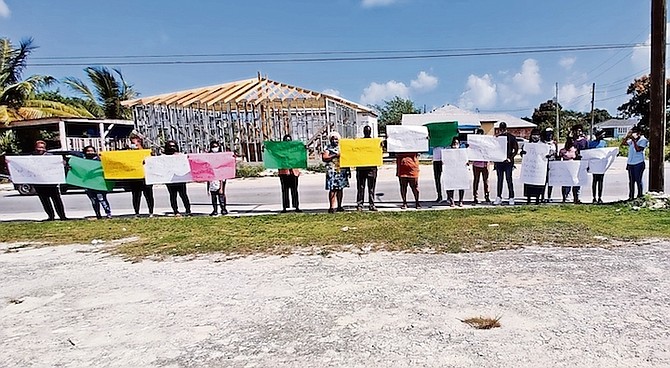 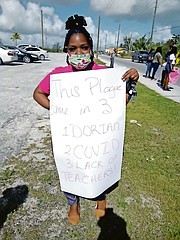 STATE Education Minister Zane Lightbourne says his ministry is working to address a teacher shortage in Abaco as industrial action continued on the island regarding the issue on Friday.

Teachers, parents and students gathered outside the Patrick J Bethel High School with picket signs protesting the lack of a sufficient number of teachers at a school of more than 500 students. This comes a month after Education Minister Glenys Hanna-Martin promised action during a PTA meeting in Abaco on February 2.

Bahamas Union of Teachers President Belinda Wilson told this newspaper that her union supports the industrial action in Abaco.

Mrs Wilson said: “The Bahamas Union of Teachers supports the teachers at Patrick J Bethel High School in Abaco and we support the teachers and parents of JA Pinder Primary School, Sandy Point, Abaco, in their demonstration today and several days ago.

“They have been very patiently waiting for teachers respectively and a guidance counselor for the Patrick J Bethel High School on promises from the Ministry of Education that they would have not yet been fulfilled. BUT supports the actions of our teachers 100 percent.”

Mr Lightbourne said during an interview that the ongoing action in Abaco started last week Thursday. He said the ministry has been in contact with protesters and that they are preparing to dispatch teachers to the island.

“We are going to get them more teachers. We’ve met yesterday when we learned that they were going to take some form of action and we tried to see if we can expedite the process. Teachers were identified for the last two weeks now and just the process of getting them to the island, getting them paid, making sure that they have everything that they need to move. So, that is a number of agencies that are involved with part of that process and the Ministry of Education is trying to see if we can hurry that along,” Mr Lightbourne said.

Minister Lightbourne acknowledged and empathised with parents’ concerns over the insufficient number of teachers on the island, but said that the country as a whole is experiencing a teacher shortage.

“I understand the parents’ concern, I would be concerned also. We have said that this is the only school that has been fully virtual since we opened back up into hybrid mode and that is very concerning, because they have an amazing shortage of teachers. We have a country wide shortage, it’s national. It’s global we understand.”

Minister Lightbourne also said that his ministry hopes to better respond to situations like this with improved cooperation between the relevant government agencies.

“However, we can do a better job of making sure that schools going forward that we identify and respond quickly if we can just modify the process of how government works when it comes to public service. To make sure that the agencies can work in cohesion to respond to timelines and needs. So, this is a huge concern, this is a focus for us, and we are going to get the teachers to those schools so the students can get their education.”

While the Minister reported that the country is currently experiencing a shortage of about 280 teachers, he says that the Ministry of Education will respond to this situation as they can given the ongoing COVID-19 pandemic and safety restrictions.

Regarding the shortage in Abaco, Minister Lightbourne said teachers were identified for that island.

“There are some teachers I understand that are being immediately sent, as of yesterday (Thursday). When we met on this some teachers have been identified for Abaco, and they are for Patrick J Bethel specifically, and they are in the process of being sent. So, I’m hoping that this week we have that problem solved, in the new school week coming.”

However, despite Mr Lightbourne’s claims that the Ministry is handling the matter, Mrs Wilson claimed there had been no communication between the Teacher’s Union and the Ministry of Education since the industrial action and that she is not aware that any new teachers had actually arrived at Abaco as yet.

Responding to questions as to why his ministry seemed to have waited until industrial action and union uproar happened to remedy the situation, Mr Lightbourne said plans to deploy teachers were already in motion. He, however, recognised that the ministry’s response to the national teacher shortage could have been better.

Are these teachers fluent in Creole? Otherwise they gonna have a hard time coping.

While the Minister reported that the country is currently experiencing a shortage of about 280 teachers, he says that the Ministry of Education will respond to this situation as they can given the ongoing COVID-19 pandemic and safety restrictions.

If the Ministry has a shortage of 280 teachers, then we have a serious problem with the education system in this country in public schools, and it means a lot of our children are going without proper education.

Our kids have been going with a proper education since Pindling kicked the white teachers out in 87. Under the excuse of "Bahamianization" he then hired lots from Gyana and Jamaica. Now they can roll spliffs properly.

Took away Bahamian nurse students lunch vouchers in 2010 and now hiring Cuban nurses. Basically if you are a Bahamian in the Bahamas, dog eat ya lunch.

But you will all the Bahamians dancing on July 10th. They love crumbs from the table.