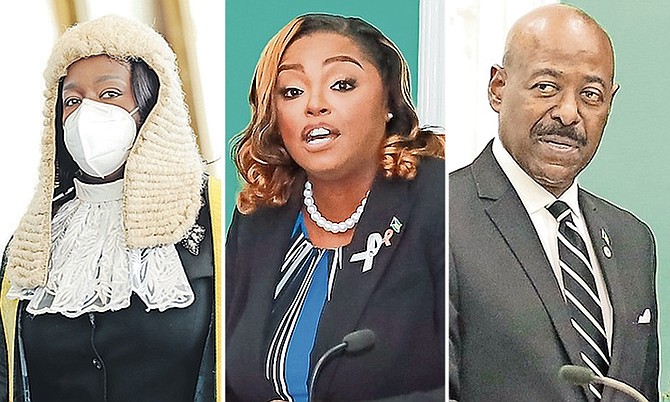 THE alleged suicide of a young mother has reignited outrage and concern throughout the country.

While social media was flooded with both kind words about Carissa Culmer, 24, and regrets that more had not been done to assist her, some government officials called for swift action regarding gender-based violence and mental health, while others said the death was unfortunate.

Among them were Senate President LaShell Adderley and State Social Services Minister Lisa Rahming. They noted on Friday that a Gender Violence Bill and Mental Health legislation are under active review with drafts to the Cabinet and Parliament forthcoming.

Both President Adderley and Minister Rahming had been intimately involved with Ms Culmer after she made an impassioned plea in a video uploaded to social media site Facebook for help in dealing with ongoing domestic violence. While that video was uploaded to the site last November, it was sometime in December that both the Senate president and Ms Rahming intervened to help Ms Culmer.

They said they were deeply saddened and devastated by the death of the mother of one child. She was found hanging in a hotel room at a hotel on West Bay Street.

“Carissa was a lovely and kindhearted young woman who so desperately wanted to make a difference in her life and our beloved country,” the joint statement read.

“We first became aware of Carissa’s acute crisis in December 2021 when her story of being a victim of domestic violence became viral. Senator Adderley immediately contacted her, and invited her to attend a Senate session as her personal guest to bring awareness to domestic violence. Minister Rahming was able to secure resources to assist Carissa and her son and invited her to address Urban Renewal’s Domestic Violence Training Session,” the statement continued.

“In my interactions with Carissa, she was always bubbly, warm and engaging,” Minister Rahming said.

The Senate president added: “Carissa was a sweet soul who was so appreciative and thankful for the consistent support, encouragement, and love my family and I had shown her. We often spoke with excitement about the next season of her life.”

Unfortunately, Carissa was a victim of domestic violence, the statement went on to note.

“The journey of all abuse victims is difficult, and is always accompanied by profound mental and emotional anguish. The path towards healing can be long and delicate. We stand resolute in continuing the fight against gender-based violence and mental health issues.

“We hereby advise that both the Gender Violence Bill and Mental Health legislation are under active review with drafts to the Cabinet and Parliament forthcoming.”

In a separate statement, Social Services and Urban Development Minister Obie Wilchcombe said he was saddened, and referred to Ms Culmer’s upbringing in state institutions.

He said: “I am advised that Ms Culmer was nurtured in our child care facilities as an adolescent and showed much promise when she eventually exited the system.

“The circumstances surrounding Ms Culmer’s death are under active investigation by the Royal Bahamas Police Force. I will reserve further comments until these investigations are completed.”

As he referred to this week’s observance of International Women’s Day, Mr Wilchcombe reiterated that women should have equal rights, pay and participation in The Bahamas’ affairs and development.

“I am advised that Ms Culmer was a devoted mother despite the challenges she may have faced. She would have personally shared her story in recent months. The Office of the Attorney General is working with my Ministry and other agencies and will introduce Revolutionary Legislation on Gender Equality, Mental Health and Children.”

He said it was the mandate of the Department of Social Services to respond in the most timely, effective, efficient and compassionate manner to the changing social needs of all citizens through the various services provided by our agencies.

“It is most unfortunate that Ms. Culmer had to endure the circumstances that ended in her untimely death,” he added. “We at the ministry extend our deepest condolences to the family of Ms Culmer. May Ms Culmer’s soul rest in peace.

While the police investigations must be thorough to be correctly conclusive, a mental health expert said a recent study conducted indicate that some 17,000 (Seventeen Thousand). Bahamians had suicidal thoughts over a certain period of time. Suicide and the thoughts of it does not necessarily have to be linked to any one situation a person is going through but, being suicidal or at least having suicidal thoughts can itself be a condition. And once a person gets over a certain crisis or hurdle, some other event or challenge will arise causing the person to stay in a state of depression. The sad and tragic thing is this young lady’s situation was exposed and became public. But still not enough was done to prevent her losing her life.

Dear Bahamas, and all readers of this article,

Sincerely, am I to understand now that, once a social ailment, or, issue as such, is addressed or takes the form of a bill to enact legislation, this in effect creates a panacea and we can then go on happily with our lives?

Parents of young children would be wise to oppose this bill given what it will likely require their children be taught at much too early an age in school. We can expected this bill to have a very bent LGBTQ agenda to it combined with an outright open 'WOKE' attack on our society. The truly nutzoid 'far left' ones among us are once using the most vulnerable in our society to push their desired lifestyle on the rest of us. And expect it to be supported by the typical very loud but small fringe group in our society led by the likes of Obie and Fweddy Boy.

Yep, for decades I warned the public but no one’s listening unless they are being entertained and served. All these people do is play with the public. These people are not there for the public, they are here for the money cartels. Stop depending on them. stop asking them for things or to do things. Otherwise, they will use the public, pretend empathy in public and then laugh behind closed doors.