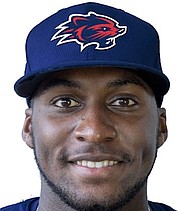 Young was also called up to Spring Training prior to the COVID-19 pandemic and in his short time there, impressed the Blue Jays’ front office in the Grapefruit League both on the field and to move up the rankings and entered the top 30 on the prospect list.

The Blue Jays will play in 17 Grapefruit League games, March 18 to April 5. They make their debut on March 18 against the Baltimore Orioles at TD Ballpark in Dunedin, Florida.

Players will have about 28 days of spring training rather than the usual 42 for pitchers and catchers.

Young spent his last minor league season with the New Hampshire Fisher Cats in the AA Eastern League. Young appeared in 78 games with the Fisher Cats and hit .265 with 74 hits and 52 RBI. He also had an .758 OPS, slugged .409 with 20 stolen bases, 41 runs scored, 15 doubles, two triples, and seven home runs.

A 24-year-old outfielder, Young spent his last offseason with the Canberra Cavalry in the Australian Baseball League. He hit .217 with a .467 OPS, five hits, two runs, one RBI, five total bases and two stolen bases.