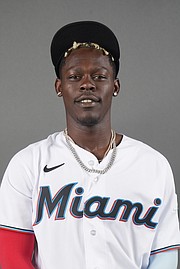 JASRADO “Jazz” Chisholm Jr and Lucius Fox both made an immediate impression early in Spring Training as Major League Baseball returned to play.

Chisholm homered in his Grapefruit League debut for the second consecutive season when his Miami Marlins defeated Fox and the Washington Nationals 8-3 Friday night at the Ball Park of Palm Beaches in West Palm Beach, Florida.

Chisholm crushed a three-run homer to centrefield in the top of the fourth inning to score Bryan De La Cruz, Roman Quinn and give the Marlins a 7-0 lead.

Chisholm told MLB.com that he credited his grandmother Judy for being there for added motivation from the stands. “Last year, she was here for the first at-bat of Spring Training, and I hit a homer,” Chisholm said. “So I told her again, I said, ‘Listen, you and your two sisters better make it out for this first game so I can hit another homer. And for sure they came out [and] I hit another homer, and she was really excited.”

Fox hit the Nationals’ first home run of Spring Training with his solo shot in the ninth inning of Saturday’s 6-2 loss to the New York Mets at The Ballpark of Palm Beaches.

He followed with a game tying double in the eighth inning of yesterday’s 3-2 win over the Houston Astros.

Toronto Blue Jays outfielder Chavez Young also got the start in Grapefuit League play yesterday afternoon. He finished 1-3 in the Toronto’s 10-4 win over the Pittsburgh Pirates.

Last year, Chisholm’s first full MLB season, he earned a postseason accolade as he was recognised as one of the top rookies in the sport. The 24-year-old infielder was named to MLB Pipeline’s All- Rookie Second team.

Fox was claimed off waivers by the Nationals in December and joined the fifth franchise of his MLB career. He immediately became the No.25 ranked prospect in the Nationals’ farm system according to MLB Pipeline and joins the team’s 40-man roster.

Over the course of his minor league career, Fox has played 386 games at shortstop, 46 games at second base, nine games at third, and eight games at center field.

Last season, he rose as high as No.26 in the Kansas City Royals’ prospect pipeline and spent the bulk of his season at the AAA level with the Omaha Storm Chasers in the International League.

Young was named a Toronto Blue Jayz non-roster invitee to 2022 Spring Training for the second time.

Young spent his last minor league season with the New Hampshire Fisher Cats in the AA Eastern League. Young appeared in 78 games with the Fisher Cats and hit .265 with 74 hits and 52 RBI. He also had an .758 OPS, slugged .409 with 20 stolen bases, 41 runs scored, 15 doubles, two triples, and seven home runs.

Jazz needs a mentor I think, he's super talented, not taking that away from him and I could be wrong but Im worried about the flashy materialism. Lets not be sorry because we didn't see