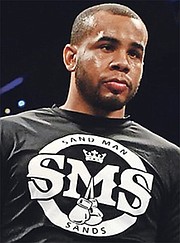 AMRON Sands is set to return to the ring for the first time in just over a year.

Sands and Schwelm will be the co-feature bout on the Mohamed Mimoune vs. Caesar Francis card.

Thun, 30, made his debut in 2018 and has opened his career with a series of dominant performances.

Most recently, he pulled off a one-round knockout of Keenan Hickmon on November 19, 2021.

He has held the International Boxing Organisation heavyweight title since a November 2020 win over Mirko Tontor.

In his last appearance, the 27-year-old Sands suffered the first loss of his professional career.

It was Sands’ second consecutive fight in the Dominican Republic. On February 20, 2020 he won by an eight-round unanimous decision over Christian Galvez.

Sands trains out of Kissimmee Boxing Academy under the tutelage of coaches Rashad Mays and Jose Ramos. He fights under the Dibella Entertainment banner and is managed by Kevin Dever.

After earning silver at the 2014 Independent Cup in the Dominican Republic, Sands moved to Florida in search of better training facilities. He also won first place at the 2015 Florida State PAL Boxing Championships and 2016 Sugar Bert Promotions Title Belt National Qualifier. According to BoxingScene.com, this weekend’s undercard will feature several undefeated prospects.

The boxing show is expected to be headlined by Marsellos Wilder (5-2, 2 KOs), the younger brother of former heavyweight champion Deontay Wilder. He will take on Eric Abraham (6-13, 3 KOs) in a six-round cruiserweight bout.